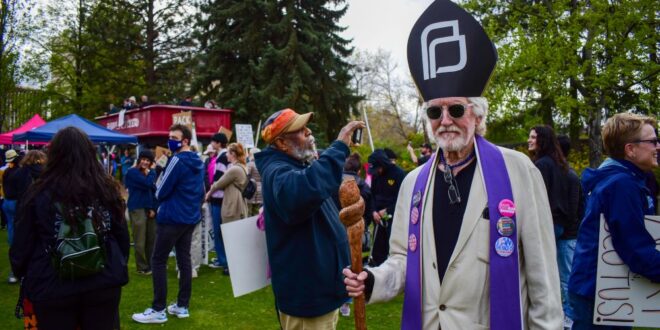 Pastor Andy CastroLang believes conservative Christians are often the loudest about abortion, others should speak up

When it comes to abortion, Rev. Andy CastroLang has a message for the people of Spokane: not all Christians are against it.

Jesus respected and trusted women, CastroLang said during a “Bans Off Our Bodies” rally Saturday evening at Spokane’s Riverfront Park. She encouraged everyone to “be more like Jesus,” which received cheers and applause from the crowd of nearly 1,000 people.

The rally was one of over 400 events that were part of a nationwide day of action on Saturday in support of reproductive rights and access to safe abortions — all in response to the Supreme Court’s expected reversal of Roe v. Wade.

CastroLang, who is the pastor of Westminster Congregational United Church of Christ, said she was raised in a Catholic home. When she was growing up, her mother became a big supporter of Planned Parenthood and posted the number on the family bulletin board for CastroLang, her four sisters and two brothers should they need it.

“My mother fought for women’s rights and the rights of her daughters and sons,” she said. “And now, here we are, I’m a grandmother now, and I’m still having to do this. We’re going backwards, and I hate that.”

The voices that are traditionally the loudest when it comes to abortion are conservative Christians, so people who support abortion need to speak up and fight for their rights, CastroLang said.

CastroLang said there are many Christians and people of faith standing in support of reproductive rights. Many want abortions to be safe and rare — but that goal requires adequate access to care.

“It’s part of my responsibility as a faith leader to get out there if I’m invited out there,” she said. “It’s an effort to be a source of healing instead of more damage inflicted in the name of Christianity.”

Protester Dan McLay said he is tired of seeing conservative Christians make people feel guilty for their beliefs, including those around abortion, because they should be standing for peace, love and tolerance.

“This is not your church,” McLay said.

McLay is a fundamentalist atheist and a member of the Unitarian Universalist Church of Spokane. He said he has been arrested for protesting similar issues in the past because he does not want his grandchildren to have to protest or go to prison if they have a miscarriage.

As a person of faith, protester Lynda Williamson believes abortion is between an individual and their god. No one should ever tell someone God is punishing them for getting an abortion or anything else, she said.

Abortion is not an easy choice, and many people have been traumatized by it, Williamson said, but autonomy is what’s most important — for both men and women.

“It’s your health and your life, so it should be your choice,” she said.

Previous Religious Youth Engage Differently Following Pandemic, Study Finds
Next I am learning that ‘being’ is more compelling than ‘doing’