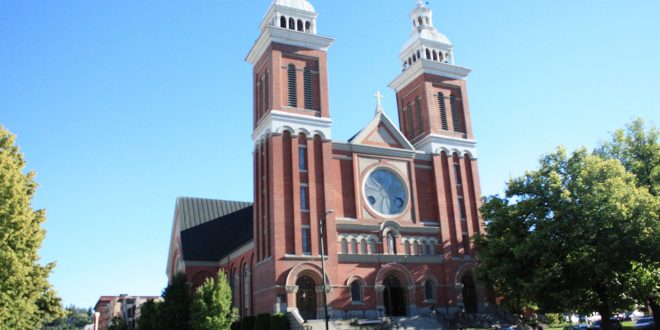 Safety of downtown churches a concern amid recent break-ins

Bad luck came in threes for Spokane’s Cathedral of Our Lady of Lourdes.

First was May 3, when someone broke into the cathedral office and stole consecration bells.

Second was May 11, when a man climbed through Rev. Darrin Connall’s bedroom window and stole cash from his wallet that sat on his nightstand.

And third was June 25, when a man broke into the 1115 W. Riverside Ave. church, damaging votive candles, the processional cross, a priceless marble altar, statues and much more, while finally being arrested on the cathedral’s front steps after he was found swinging a metal cross affixed with a large knife.

“The level of criminal activity that we’ve seen lately,” is heartbreaking, said Connall. “We always have little problem, but it just seems the last couple of months we’ve had crime, we’ve had to call crime check, we’ve had disturbance in mass … We’ve had various levels of disruption.”

Once a church with an open-door policy, the cathedral has had to lock its doors if no one is physically in the building, Connall said. Security cameras are rolling at all hours.

“We really do not want to lock these doors,” Connall said. “We are in the heart of downtown, and it’s not the mission of the church to be locking these doors. It’s our mission to keep them open. We are committed to do that, but at the same token we have to keep people safe, and we have to keep property safe.”

Our Lady of Lourdes isn’t alone when it comes to criminal activity surrounding the church — and the nation has taken notice.

The U.S. Department of Homeland Security has a guide for emergency plans at places of worship, including a section on how to act in an active-shooter situation. The National Church Arson Task Force was created in 1995, opening investigations into arsons, bombings or attempted bombings that occurred at houses of worship. A 36.2 percent arrest rate in Task Force arson cases were more than double the 16 percent rate of arsons in general, a 2000 report said.

Other downtown churches are aware that safety is a priority for their congregation, as a population that has chronic homelessness, mental illness, substance abuse and addiction “comes with the territory,” Connall said.

Alan Eschenbacher, pastor at All Saints Gather Lutheran Church, decided to lock all entries to the Browne’s Addition church five years ago, following a break-in and theft.

“Because the building is so big and sometimes there’s only one or two people, it’s hard to know who’s coming in and out of the building,” he said.

The last criminal incident at All Saints occurred in December 2014, the pastor said, when an early morning break-in resulted in a lot of damage, and pushed the church to put up security cameras.

“They don’t really help stop a crime, but the police have a visual then of who was committing the crime,” Eschenbacher said.

Jan Shannon, assistant pastor at Westminster Congregational, said the church has procedures in place in case of emergencies, and their deacons are prepared if disturbances occur during Sunday morning worship.

“We rarely have any kind of major disturbance, and the occasional time when a guest gets upset or has a medical emergency, our deacons have handled it so well and so quietly that often the congregation doesn’t even know there was a problem,” Shannon said in an email.

Westminster UCC locks its doors, and a doorbell on the Washington Street entrance allows visitors to ring in during office hours.

“Since Westminster shares its building with other organizations, we practice greater security to ensure that our renters’ offices are adequately secured,” Shannon said. “During office hours, people are welcome to come in and speak with our office manager or either of the pastors.”

Overall, the church has not seen an uptick in crime, or really any crime at all.

Eschenbacher said a mental health chaplaincy has helped minimize incidents at his church, especially because a few mentally ill and homeless people come to Sunday services each week.

“We had a homeless man who was undergoing some severe psychosis and alcohol-related outbursts,” Eschenbacher said of a recent service. “We handled it so he was able to stay in the church service. Two people came by, sat with him, calmed him down, made it through the service and the rest of the congregation was OK. We didn’t stop and call the police, we handled it ourselves. Nobody got hurt. There was some bad language and things, but life happens.”

That kind of work is what it’s going to take for churches to prevent crime, Eschenbacher said.

“You can make buildings secure, you can put up steel doors you can take windows down … but you have to draw some sort of balance between accessibility and friendliness and being a prison,” he said.

For All Saints, Westminster and Our Lady of Lourdes, heads of all three places of worship agree there must be a balance between keeping the congregation safe and remaining open to all.

There was often an hour or two when Our Lady of Lourdes was unstaffed, yet homeless people could come in and get warm in the winter and cool in the summer, Connall said.

“But we can’t do that anymore — not right now anyway,” he said. “We can’t just open ourselves up to the level of crime.”

Even more heartbreaking for Connall, though, was to see how clearly under the influence of drugs the man was who is suspected of strapping a knife to the cross.

“I didn’t know him from Adam, but you have to wonder the level of slavery that causes in one’s life,” Connall said. “You get trapped in substance abuse or addiction, and I don’t believe that young man would be doing that if he was in his right mind. That causes me sadness. There’s not freedom there. The person is not free.”

Connall hopes future work with local officers and an FBI video security specialist can help not only secure the building, but maybe free up opportunities to open doors again.

While locks are a simple step to safety, Connall said there have not been any final conclusions on cathedral security, which will likely be made toward the end of summer.

“Downtown Spokane is a lovely place and we want to be a good neighbor and part of that community, and we are really committed to be welcome and opening,” he said. “So stay tuned.”

Support local journalism by donating below!

Lindsey Treffry can be reached at lindseytreffry@gmail.com or on Twitter @LindseyTreffry.