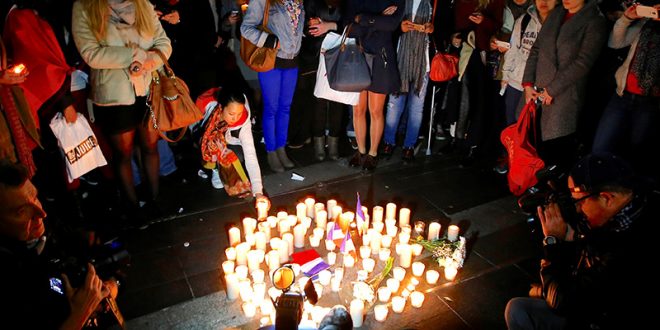 Members of the Australian French community stand around candles during a vigil in central Sydney, Australia, July 15, 2016, to remember the victims of the Bastille Day truck attack in Nice. REUTERS/David Gray - RTSI2EK

VATICAN CITY (RNS) Religious leaders around the world condemned terrorism and expressed solidarity with France after scores of people were killed when a truck plowed through crowds celebrating Bastille Day.

They included Christian figures such as Pope Francis and prominent Muslims such as Egypt’s Grand Mufti Shawqi Allam.

But the attack on Thursday (July 14), France’s national day, reignited an international debate about what part Islamic teaching plays in terrorist attacks by young Muslims whose violence is rejected by many mainstream clerics.

While world leaders condemned the attack, President Barack Obama and others received criticism from political conservatives for not being as explicit as French President Francois Hollande was when he said: “All of France is under the threat of Islamic terrorism.”

In the U.S., where controversy still rages over Donald Trump’s proposal to ban immigration by Muslims, former House Speaker Newt Gingrich said in response to the attack only “modern Muslims who have given up Shariah,” or Islamic law, should be allowed to be U.S. citizens.

At the Vatican, Pope Francis expressed revulsion over the attack.

“We condemn in the strongest way every demonstration of senseless violence, of hatred, terrorism and any attack against peace,” said a statement issued by the Rev. Federico Lombardi, the Vatican’s chief spokesman. “On behalf of Pope Francis, we join in solidarity with the suffering of the victims and of the entire French people this day that should have been a great holiday.”

The archbishop of Canterbury, Justin Welby, took to social media to comment on the killings: “As the French rejoice in their liberty, human evil kills the innocent cruelly. Let us weep with them, let us stand with them #PrayForNice.”

As the French rejoice in their liberty, human evil kills the innocent cruelly. Let us weep with them, let us stand with them #PrayForNice

Sheikh Salman al-Ouda, a Saudi cleric, said the attacker would be cursed by “God, his angels and all human beings,” according to The Guardian.

Allam, the Egyptian grand mufti, who is the country’s official interpreter of Islamic law, said people who commit such ugly crimes “are corrupt of the earth and follow in the footsteps of the devil … and are cursed in life and in the hereafter,” accordingto Egypt’s Ahram Online newspaper.

In the United States, the Council on American-Islamic Relations condemned the massacre and issued a plea:

“As we mourn the victims and determine how best to protect people of all faiths and backgrounds from such brutal attacks, let us not help the recruiting efforts of ISIS and other terror groups by blaming all Muslims for the murders in France,” said a statement by its leader, Nihad Awad.

He rejected Gingrich’s proposal about Muslims and Shariah.

“When Former House Speaker Newt Gingrich suggests that American Muslims be subjected to an Inquisition-style religious test and then expelled from their homes and nation, he plays into the hands of terror recruiters and betrays the American values he purports to uphold,” Awad said.

According to CNN, Gingrich had said in an interview with Fox News’ Sean Hannity: “Let me be as blunt and direct as I can be. Western civilization is in a war. We should frankly test every person here who is of a Muslim background, and if they believe in Shariah, they should be deported.”

“Shariah is incompatible with Western civilization. Modern Muslims who have given up Shariah, glad to have them as citizens. Perfectly happy to have them next door,” he added.

However, on his Twitter account Gingrich said his words had gone through “amazing distortions” in the media.

Amazing distortions of my interview on Hannity last night.i will do a lengthy facebook live later this morning on the issue of sharia

Jerome Socolovsky contributed to this report.

Previous Safety of downtown churches a concern amid recent break-ins
Next Are the Barbarians at the Gates?