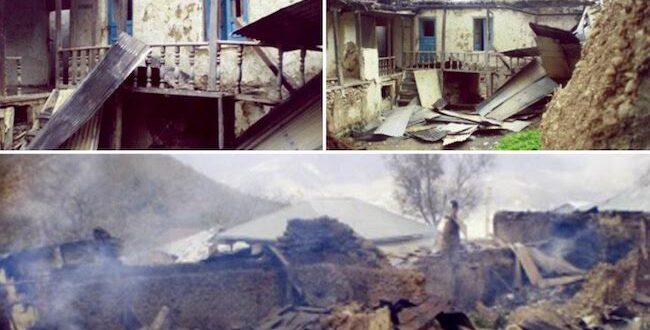 Over many years, Baha'i-owned properties in Ivel, Iran, have been attacked and unjustly confiscated, displacing dozens of families and leaving them economically impoverished. These images show a home that was burned in 2007

Last February a story broke about Iranians demolishing homes of Baha’is with court approval. “No wrongdoing had occurred,” the court determined, because “ownership of property by the 27 Baha’is” was not valid “due to their membership in the Baha’i faith.”

At the time, a spokesman for the U.S. Baha’i Public Affairs Office termed that decision “significant” because it represented a “departure from prior written opinions.” Judges in the past admitted orally that “religious discrimination” was “the reason for their decisions,” but in written opinions they were careful to justify similar confiscations using technicalities, such as alleged violations of zoning/permitting ordinances.

The spokesman called the written admission of discrimination “worrisome” because it “may signal a growing lack of concern with public opinion,” which “has long been the primary mitigator of Iranian government persecution against Baha’is.”

That observation was prescient. A year later Iran’s regime is increasing  its own wealth by confiscating Baha’i properties, according to the Baha’i International Community (BIC). The execution of Imam Khomeini’s Order (EIKO) is orchestrating a rising trend of confiscations of Baha’i properties. EIKO is entirely controlled by Iran’s leadership. It holds extensive assets across Iran.

“The seizure by…EIKO of Baha’i properties is a novel and very worrying development for Iranian Baha’is,” said Diane Ala’i, BIC representative at the United Nations in Geneva. “This development demonstrates that the highest levels of Iran’s leadership are orchestrating the persecution of the Baha’is in Iran.” Examples include:

A judge ordered the properties in Semnan to be transferred to EIKO under Article 49 of the Iranian Constitution. Under Islamic law, Article 49 requires the government to prove the legitimacy of such seizures. Misusing this law to justify confiscations demonstrates the religiously-motivated purpose behind the seizures.

“Iran’s leadership is enriching itself while impoverishing and displacing the Baha’is,” Ala’i said. “Seizures in Semnan, Mazandaran and Kohgiluyeh and Boyer-Ahmad provinces may be just the beginning. The risk is that more properties will continue to be seized, in a piecemeal fashion, in an attempt to evade the notice of the international community. Supporters of human rights inside and outside Iran must condemn this outrageously unjust ruling and demand that it be rescinded without delay.”

Ala’i said asset seizures stretch back decades in  Semnan, where they appear to have been used as a laboratory prior to systematic campaigns of country-wide persecution against Iranian Baha’is. Attacks there have been notable for their particular intensity, she said, and for the mobilization and coordination of official and unofficial elements. These include police, courts, local authorities and the clergy. Persecution there has ranged from hate speech to economic strangulation, arrests and physical attacks.

Religious persecution is not new. Generations of Jews were persecuted long before unnumbered Christians were martyred, beginning with Jesus Himself. In the 19th century 20,000 Babis, followers of Baha’u’llah’s Forerunner, were slain. These events have been documented by Fereydoun Vahman, Professor Emeritus at Copenhagen University, in his 2019 book “175 Years of Persecution: A History of the Babis & Baha’is.” Baha’i persecutions continue around the world, most notably in Muslim countries, although not usually as intensively as in Iran.

View All Posts
Previous POEM: Loving The Homeless
Next Supporting Transgender Youth is Love, Not Abuse