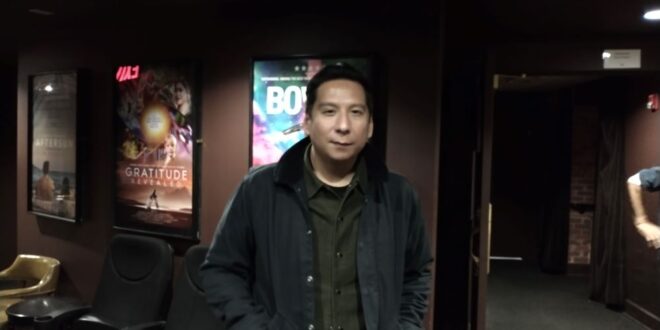 One Heart Native Arts & Film Festival was held at Magic Lantern Theater Friday and Saturday night, presenting films made by Indigenous artists, including Sky Hopinka, a Ho-Chunk filmmaker who was recently named a MacArthur Fellow, and his feature film “małni – towards the ocean, towards the shore.”

The experimental documentary, which Hopinka funded himself, is described on Grasshopper Film’s website as “a poetic, experimental debut feature circling the origin of the death myth from the Chinookan people in the Pacific Northwest.”

It follows two people, Sweetwater Sahme and Jordan Mercier (who are friends of Hopinka), as they wander through their surrounding nature, the spirit world and something much deeper inside, the website said. Sahme and Mercier both take separate paths contemplating their afterlife, rebirth and death.

Julia Keefe, president of the festival, described Hopinka’s film as a meditation, and she hoped it brought comfort to some and discomfort to others.

Hopinka had been working on the film for several years and became interested in the origin of death myth while learning the Chinuk Wawa language. When it came time for him to make a feature-length film, he said it was the first idea that came to him.

The film takes a nonlinear approach to storytelling and is shot mostly in the Chinuk Wawa language with English subtitles. Also, whenever someone speaks English, it is shown in Chinuk Wawa subtitles.

At first, the film was intended to be shot entirely in the Indigenous language, but Hopinka said Sahme doesn’t speak it, so they found a way for her to have her voice be true to her rather than try to impose certain restraints on it.

Regarding how the film was shot and edited, Hopinka said he wanted it “to feel artificial or like something that is constructed or made.”

“I want it to feel like these are things that I’m doing, not necessarily like a sense of movie magic but there’s someone behind the camera making choices,” he said.

He added that he wants to be accountable for what the film is and not necessarily wants it to be a singular voice for all Native people and all Native cinema.

“I want the subjectivity to be felt where it’s just this is my interpretation of the world that I’m living in and the camera is a way to do that,” he said, especially with regards to certain scenes, abstractions, and mistakes that filmmakers would normally cut out. “They just remind you that this a camera and, even as an audience, I hope too that helps you position yourselves somewhere where it feels a little more intimate or feels like you might not necessarily know the context or a lot of the information or knowledge that’s being shared, but you do have a sense that there is something there; or that there’s some sort of intimacy.”

He said the film is not about knowing everything or what everything means, but rather having the audience relate to it in some way, even if they don’t have the language or words for it. It offers a lot of ways of interpreting and understanding it.

With the recent Indigenous media movement that has been occurring with movies and shows such as “Reservations Dogs,” “Prey,” “Molly of Denali,” “Spirit Rangers” and “Rutherford Falls,” Hopinka said he sees it as a turning point in representation and the film industry.

With any movement, he said they ebb and flow or wax and wane, and like anything else whether or not people who aren’t Native are watching these movies, the films are still being made regardless of who is watching.

“Just because the mainstream doesn’t recognize what’s going on in the Native art community or film community, things are still happening and people are still making things, and I think that’ll happen regardless of what happens with wide mainstream acceptance of Native artwork,” he said.

For the next generation of aspiring Indigenous filmmakers, Hopinka said they should make the films that they want to make.

“If you don’t see yourself or you don’t see your voice represented in the things that you’re seeing then you can make that yourself,” he said. “It’s easier more than ever to make films with whatever camera that you have.”

He added that there’s no wrong way to make a film and that’s important to remember when the educational aspect of filmmaking has been a barrier to keep a lot of Native people out of the film industry.

“You don’t need permission to make the films that you want to make,” Hopinka said.

Keefe said she was excited by hearing his perspective on experimental filmmaking, how young Indigenous filmmakers don’t have to follow the “rules” of filmmaking and can make films they want to make with the tools they have.

Earlier this week, Hopinka was named a 2022 MacArthur Fellow, which comes with a $800,000 grant, often referred to as a “genius grant,” that is paid over the course of five years by the MacArthur Foundation.

Hopinka was shocked and surprised when he got the news of the award and didn’t feel real when he heard it, but it’s starting to feel more real now.

He said the grant money will help out with his next film that he’s been trying to make since before the COVID-19 pandemic, which will be shot next summer. The grant will be used for other projects as well.

Other films shown in the festival included “The Handsome Man,” starring Evan Adams (“Smoke Signals”) and Lily Gladstone (“Certain Women,” “Killers of the Flower Moon”); the documentaries “This Is the Way We Rise” and “Into the Circle”; and a PSA about Missing and Murdered Indigenous Women and Girls (MMIWG) by Jeff Ferguson.

Hopinka’s film can be bought on Grasshopper Film’s website and streamed on The Criterion Channel.

Previous ICR on the Road … and on the Ropes
Next Ask Boldy, Live Justly