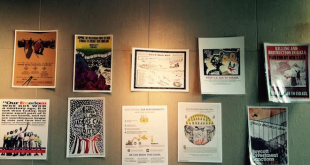 Boycotts can be effective. A poster exhibit in the Phase 1 building at Spokane’s Washington State/Eastern Washington State campus illustrates how economic activism has worked over the years; from the Montgomery Bus Boycott in the 1950s, the anti-Apartheid movement of the 80s to today’s call by many organizations to boycott Israel.

END_OF_DOCUMENT_TOKEN_TO_BE_REPLACED

I’m sure when I was born some 30-odd years ago and the doctor exclaimed, “It’s a ….redhead!” my parents felt what I imagine most parents do in that moment — a determination to protect their child, and to love her everlasting.