Dr. Emily Suzanne Clark is an Assistant Professor of Religious Studies at Gonzaga University. She specializes in American religious history with a focus on the intersections of religion and race in American history and culture. She received a B.A. from Austin College, her M.A. in Religious Studies from the University of Missouri, and a Ph.D. in Religion from Florida State University. In addition to American religious history and religion and race, her research and teaching interests include African American religions, American Catholic history, religious material culture, and religion and politics. She has published on the Moorish Science Temple, African American Catholicism, and religion in the U.S. South. Her current book project, A Luminous Brotherhood: Afro-creole Spiritualism in Nineteenth-century New Orleans, explores the politics of talking to the dead. She is an active member of the Gonzaga Digital Humanities working group and is the Associate Editor for the Journal of Southern Religion. When not teaching, reading, or researching, she can be found hiking and running about the area and playing soccer in the local Spokane adult leagues.

A Violent Act in the Name of White Supremacy: The Charleston Shooting 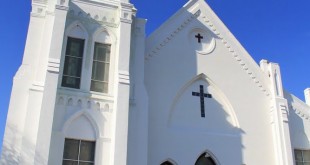 The targeting of Emanuel AME Church was not random, nor was the date of the shooting. It was calculated. It was brutal. It was white supremacy.