David Gibson is an award-winning religion journalist, author and filmmaker. He is a national reporter for RNS and has written two books on Catholic topics, the latest a biography of Pope Benedict XVI.
@gibsonwrites

NEW YORK (RNS) When asked if accepting civil unions would make him “uncomfortable,” New York Cardinal Timothy Dolan said it would because it could “water down” the traditional religious view of marriage.

END_OF_DOCUMENT_TOKEN_TO_BE_REPLACED

At 77, Pope Francis keeps a busy pace, and aides keep their fingers crossed

VATICAN CITY (RNS) Church leaders welcome the reforms and fresh air that Pope Francis is bringing to an often dysfunctional institution. But at 77, they just want him to have the stamina to keep it up.

END_OF_DOCUMENT_TOKEN_TO_BE_REPLACED

VATICAN CITY (RNS) When Pope Benedict XVI officially left the Vatican in a helicopter a year ago this week (Feb. 28), becoming the first pontiff in 600 years to resign, many in his conservative fan base were aghast, even angry. He has betrayed us, said those who thought Benedict’s papacy would be the final triumph […]

END_OF_DOCUMENT_TOKEN_TO_BE_REPLACED

“You are not a royal court,” the pontiff tells more than 100 scarlet-clad “princes of the church” arrayed before him in St. Peter’s Basilica.

END_OF_DOCUMENT_TOKEN_TO_BE_REPLACED

Cardinals gather in Rome as debates on church reform heat up

VATICAN CITY (RNS) Anticipation is mounting for a series of closed-door discussions on Thursday and Friday, when the cardinals will hold what are expected to be frank talks about issues such as contraception, cohabitation, gay marriage and whether divorced and remarried Catholics can receive Communion.

END_OF_DOCUMENT_TOKEN_TO_BE_REPLACED 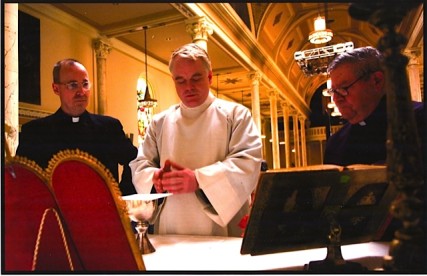 Broadway marquees went dark for a minute Wednesday night in honor of actor Philip Seymour Hoffman, who died this week at 46, apparently of a heroin overdose.