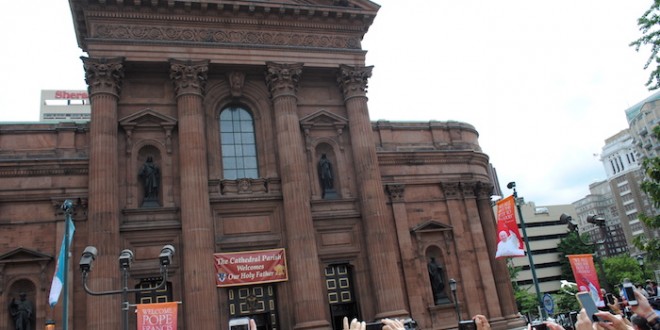 At a Mass at the Cathedral Basilica of Sts. Peter and Paul, where hundreds listened inside, and thousands listened outside, he urged Catholics to answer the call to build up the church, “…whether as priests, deacons, or members of institutes of consecrated life.”

Pope Francis said Catholics need to help youth find ways to share their gifts and enthusiasms with their communities.

“One of the great challenges facing the church in this generation is to foster in all the faithful a sense of personal responsibility for the church’s mission, and to enable them to fulfill that responsibility as missionary disciples, as a leaven of the Gospel in our world. This will require creativity in adapting to changed situations, carrying forward the legacy of the past not primarily by maintaining our structures and institutions, which have served us well, but above all by being open to the possibilities which the Spirit opens up to us and communicating the joy of the Gospel, daily and in every season of our life,” he said.

He said society is rapidly changing and the church needs to adapt by engaging. He called on the laity to use their gifts to help the church.

Kathleen Fee, of Philadelphia, said she couldn’t hear the homily well, as the wind had picked up outside the basilica, but said she came out to support Pope Francis because she can tell he truly cares about the people.

“I think that’s why people are so thrilled about him, because he’s doing wonderful things for everybody” she said. “And he’s a regular guy this pope, he really, he’s just so even with everybody.”

She added that Pope Francis seems to pay attention to everyone and is said she and her friends are thrilled he’s in their city.