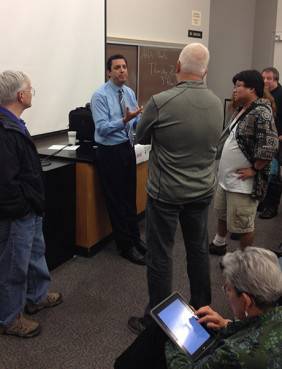 David Silverman, president of American Atheists, talks to audience members after announcing the formation of an atheist-only television channel at a talk at Stanford University. Religion News Service photo by Kimberly Winston

Atheist TV: Coming soon to a television near you

David Silverman, president of American Atheists, talks to audience members after announcing the formation of an atheist-only television channel at a talk at Stanford University. Religion News Service photo by Kimberly Winston

Speaking at a gathering of local atheists, humanists, freethinkers and other nontheists in a chemistry lecture hall at Stanford University, David Silverman, president of American Atheists, a national advocacy group for nontheists, announced Tuesday (May 6)  that his New Jersey-based organization would launch the first television channel dedicated to atheism in July.

“Why are we going to television?” he asked the audience, a mix of about 100 students and people from the local community. “It’s part of our strategy of going where we are not.”

Silverman, 49, said the television channel, which will be available via Roku, an Internet streaming player that attaches to televisions like a cable box, will run atheist content seven days a week, 24 hours a day. He estimated it will reach 7 million households and will be free, at least initially.

The channel, which Silverman did not name, is believed to be the first channel dedicated exclusively to nontheism. There are more than 100 Christian and four Jewish television stations broadcasting in the United States.

The channel will air video of previous atheist events, such as footage from past American Atheist conventions and speakers at 2012‘s Reason Rally in Washington, D.C., as well as content provided by atheist video bloggers and other atheist groups.

In addition, the channel will air segments of “The Atheist Viewpoint,” a show produced two decades ago by Madalyn Murray O’Hair, American Atheists’ deceased founder and plaintiff in the 1963 landmark Supreme Court case that removed Bible readings from public schools.

“We are envisioning a lot of different content from many different atheist content creators,” said Dave Muscato, American Atheists’ director of communications. “We are hoping to sign on many other atheists who create videos currently on YouTube and other places.”

Reaction from the Stanford crowd was enthusiastic; a few began to applaud and a ripple of discussion buzzed through the room after Silverman’s announcement. Tom Manger, an atheist from Pleasanton, Calif., asked Silverman whether he considered creating an atheist radio channel. Manger said he has a playlist of more than 1,000 songs that are atheist in theme, nature or origin.

The post Atheist TV: Coming soon to a television near you appeared first on Religion News Service.

Previous Introducing “Ask a Jew”
Next Understanding identity and affirmation