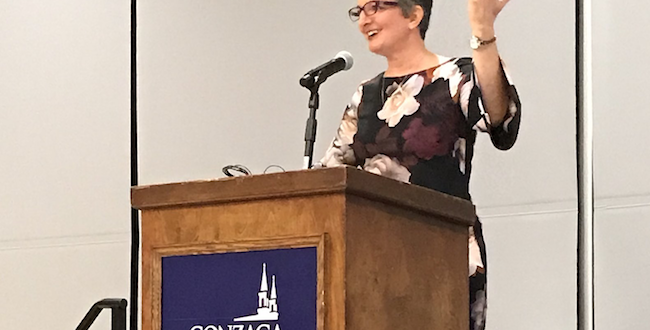 Rabbi Francine Roston of Whitefish, Montana, emphasized this valuable lesson and many others during her keynote lecture “Responding to Hate and Cyber-terrorism: Lessons From Whitefish, Montana,” part of Gonzaga University’s 4th International Conference on Hate Studies, “Engaging Communities for Justice.”

Roston co-founded the Glacier Jewish Community/B’nai Shalom Montana Jewish community when her family made the move from New Jersey to Whitefish in 2014.  The quiet and peaceful life she expected was suddenly — and violently — disturbed last December. Jewish community members in Whitefish were victims of “vile and vicious anti-Semitic harassment, cyber-terrorist attacks” and threats of an armed Nazi march on Martin Luther King, Jr. Day for several weeks, Roston said.

The call for the attacks came from Andrew Anglin, founder of the neo-Nazi website The Daily Stormer. Known White Supremacist Richard Spencer — who Roston believes coordinated with The Daily Stormer to propagate anti-Semitic tropes — also lives in Whitefish part-time.

“Richard Spencer is the leader of the so-called alt-right movement,” Roston said. “He is a privileged and bigoted propagator of anti-Semitism and White Supremacy…In his words, diversity makes the world ugly, it makes the world lose all meaning and it’s a way of bringing to an end a culture that was defined by white people.”

The Daily Stormer’s troll storm began with claims that one of Roston’s congregants Tanya Gersh — the only female Jewish relator in town — was threatening Richard Spencer’s mother, Sherry, and pressuring her to sell a property in town. Other posts directed hateful and threatening messages at Roston and the wife of a retired local Rabbi.

“They [The Daily Stormer] attacked three Jewish women in Whitefish,” she said. “I believe the attack happened because a neo-Nazi who runs a website coordinated with Richard Spencer to propagate an old, anti-Semitic story: The Jews were taking over a pristine white town. The Jews were criminal and oppressing the whites, and so the Jews must be stopped.”

The attack began with “doxing,” where people gather personal information to post anonymously on discussion boards, typically with malicious intent. Through doxing, The Daily Stormer encouraged people to attack and harass the Jewish community, Roston added. The attacks also included threatening phone calls, emails and social media posts, doctored photos of Jewish community members burning in ovens and donning yellow stars from the Holocaust on their clothing, and calls for gas chambers. The Daily Stormer eventually expanded the attacks to presumed Jewish businesses. No one has been charged with any crimes in this case.

“There are plenty of references to the Holocaust. They wanted to let us know what they wanted to happen to us,” Roston said. “I strongly believe and hope someday that someone makes the legal case for this.”

Though the Nazi march through Whitefish on Martin Luther King, Jr. day never occurred, the town lives with “the effects of trauma and fear every day,” Roston said. She pointed to examples: armed security at Jewish events and expanded home security.

Roston still struggles to understand why her inclusive and open-minded town was the target of hate and harassment. But she offered several lessons. The first: Do not feed the trolls.

Various organizations like the Southern Poverty Law Center and Secure Community Network told the Jewish community in Whitefish to keep away from the press during the cyber-terror storm, and “go dark” on social media channels and other outlets.

Roston also reminded the audience to find ways to stand up to hatred in the community and remember the good people in the world who will advocate for love.

Seventy members of the community gathered to celebrate Hanukkah together in Whitefish during the cyber attacks. Whitefish residents brought “baskets of love” to Roston and other Jewish community. Cards poured in from addresses throughout the country, which reiterated the importance of a handwritten note for Roston. Gov. Steve Bullock of Montana condemned white nationalism on multiple occasions and privately visited the affected Jewish families.

Lastly, Roston emphasized the importance of unification and kindness.

“Hate has a first amendment right but goodness does too,” she said.

After her lecture, Roston engaged in a short Q&A session with the audience, where she briefly touched on journalists’ ethical responsibilities when covering hate, faith during a tragedy, interreligious dialogue, and the contested belief that silence is complacency. When answering a question about the latter, Roston recalled advice she received from a friend: “You are not letting them win. You are just using a different strategy.”

“I was silent in the moment but I’m not silent now,” she said.