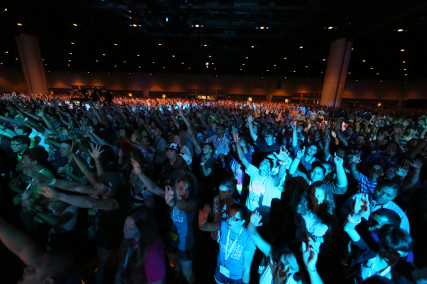 ORLANDO, Fla. (RNS) The Assemblies of God, a denomination rooted in rural and small town America, appears to have leaped into the 21st century with dramatic results.

At its General Council meeting this week (Aug. 5-9), the denomination touted its formula for defying the seemingly irreversible decline of other religious groups: contemporary music, arts and high-tech quality communication, outreach to young people, immigrants and ethnic minorities.

The denomination reported a 1.8 percent increase in U.S. membership to 3 million adherents. Globally, the gain was 1.5 percent, to 66 million, making it the largest Pentecostal group in the world.

Why are the Assemblies of God defying the odds?

“We have been flexible when it comes to culture — music, dress, pulpit attire — while remaining consistent on that which has not changed, which is doctrine,” said George O. Wood, the newly re-elected general superintendent who is also chairman of the World Assemblies of God.

Wood, 71, an attorney as well as a minister, said other denominations have “shifted in their doctrinal focus, and softened their reliance on the authority of God’s word, especially as it relates to Scripture and sexuality morality.”

For example, the denomination’s boys’ youth group, the Royal Rangers, appears to have benefited from the Boy Scouts of America’s recent decision to admit gay scouts.

“Since the May 23 BSA decision, Royal Rangers has received many inquiries from families, churches, and denominations seeking an alternate way to mentor future men,” said Doug Marsh, national Royal Rangers director. “We have helped dozens of troops make the transition or take steps for a forthcoming change.”

Among the 26,000 delegates and visitors thronging the cavernous halls of the Orange County Convention Center for the biennial meeting, which ended Friday, there is still a smattering of older white people and women in modest, ankle-length skirts and sensible black shoes.

But they are almost lost among the young, especially people of color. Fully 40 percent here are under 25, according to the gathering’s organizers, many of them immigrants or children of immigrants, and minorities.

The Assemblies dates back to a 1914 gathering called “the Azusa Street Revival” in Los Angeles, a series of interracial services that featured what would become the essential elements of Pentecostalism, including speaking in tongues (glossolalia), faith healing, prophecy and a practice called “slain in the spirit,” in which a person falls to the ground as a result of a Holy Spirit encounter. In the early decades, few of its preachers were seminary trained.

Today, the Assemblies of God congregations range from urban storefronts to suburban megachurches. And although its theology is proudly conservative — some would say fundamentalist — the denomination’s history has given it some key advantages.

In addition to being racially integrated from its inception — as a Fuller Theological Seminary student in the 1960s,Wood marched for civil rights — the Assemblies has always ordained women. In some areas, according to Charisma magazine, 60 percent of new pastors are women.

The denomination was an early adapter of contemporary, and then electronic music.

However, some change can be disquieting. In the past year, the denomination reports that traditional “water baptisms” have nearly doubled while “spirit baptisms,” involving speaking in tongues, declined. Some have wondered whether this was a product of unfamiliarity with the tradition among immigrant members.

But Wood, son of a China missionary, attributes this to yet another cultural shift — the eclipse of regular Sunday evening services, where such conversions often took place. He said he thought that thousands of unrecorded “spirit baptisms” have taken place at summer camps for young people.

In the last few years, the denomination has recruited veterans of the Relevant Media Group in Orlando to help develop a Pentecostal voice for new media.

Significantly, the team is based in Nashville, Tenn., rather than at the denomination’s headquarters in Springfield, Mo. Their instrument of choice is the iPad.

“Historically the Assemblies of God has always been entrepreneurial,” said Steve Strang, the son of two Assemblies of God pastors, as well as the founder and CEO of Charisma Media, a book and magazine publisher based in Lake Mary, Fla.

“They’ve always hustled,” he said. “When entrepreneurs look and see that things are not growing, they make a judgment and adapt, and that’s what’s happening.”