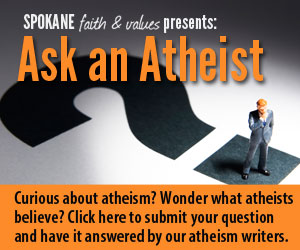 Ask An Atheist: Where do atheists think they’ll go when they die?

When atheists die, where do they believe they’ll go?

This should be one of the more obvious answers: unless the atheist believes in a sort of natural afterlife (which I have never heard any profess, though its not a logical impossibility, perhaps building on a reincarnationist framework, or higher dimensions where MIND somehow survives) atheists don’t believe they “go” anywhere — we die, just as all people have since organisms started doing that. To sleep, but not perchance to dream.

Incidentally, a belief in an afterlife is not a religious universal, either, where eternal life might occasionally be a gift from the gods (it figures in the Sumerian flood stories for example) but not necessarily something the believer is entitled to. In that evolutionary process whereby successful religions develop beliefs that set well with their followers, afterlife desires have come to be as central to the God of Abraham group as they have been to Hinduist reincarnation pantheism.

Now how many atheists would like there to be an afterlife is a different issue, and I don’t know of any surveys off hand that have addressed that side of things. I, for one, would be happy to know that people could continue being and learn (my favorite candidate for benefiting from an afterlife would be Schubert, who died never knowing how revered his music would become for posterity — it would be nice if he could know that).  But my desires do not override my belief that there is no incorporeal spirit inside my brain, and once the physical system shuts down for me, I’m gone. And so for us all, like it or not.

Naturally for all people who find that an inconvenient prospect, atheism has no marketing potential whatsoever, no “Pie in the sky by and by when you die” to offer. The irony for atheism is that, if atheists are right, no religious believer in an afterlife will ever know they were wrong. One might think then that only the atheist has the possibility of discovering they were wrong, standing before the locked pearly gates, but it may be a crowded line as millennia of believers in this or that discover to their chagrin that it was Zeus all along. As an atheist, though, I don’t believe that to be very likely.

To some extent there has been a lack of clarity regarding the death and eternal life issue in some crannies of Christian apologetics, where the impression is that only by belief in Christ can you “live” after death, when the whole notion of hell is predicated on the assumption that everybody lives after death, just that some people get a joyous place to spend eternity while the rest are roasted forever. In this area the most morally problematic would be believing spouses of a nonbeliever: how “happy” could they be forever knowing their loved one was being in agony forever?  A creepy prospect, but one dictated by the theological logic.

If the atheist view is correct, though, that is one moral dilemma no human mind will ever have to face for all eternity.