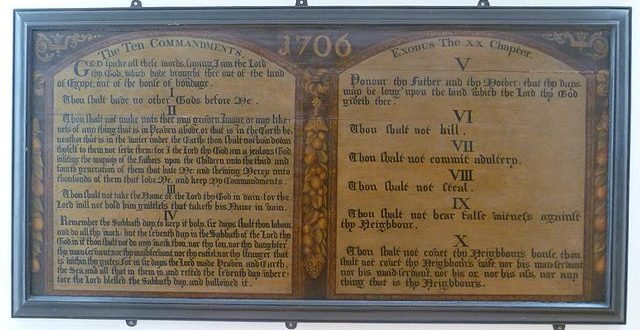 The panel is believed to be from the Trinity College Church in Edinburgh, which was demolished in 1848. It survived because it was displayed in Edinburgh prisons for the next 150 years./Wikipedia photo by Kim Traynor

My question is do you follow these 10 commandments? If not why not? Please be specific as I think for once the Bible is very clear in Ex 34:1-28 that this is the only list that meets all the criteria for being labeled The Ten Commandments.

I will write two articles in response. In this one, I will try to address as best I can the Ten Commandments matter.

To start, when we Evangelicals approach Scripture, the first rule to interpret the meaning of any text is context. So what’s going on in Exodus 34?

The first time the Ten Commandments are given is in Exodus 20 When God speaks audibly from Mount Sinai to the whole people. This passage doesn’t actually use the phrase “Ten Commandments” to describe them. How do we know these are the ones? Well, because they are recorded in Hebrew poetry, all the people heard them together, they can count and there are ten of them. Five have do with our relationship to God, (no other gods, don’t make idols, don’t misuse His name, honor the Sabbath) and five have to do with our relationship to other people (honor mother and father, no murder, no adultery, no stealing, no false witness, no coveting). So, from this time forward, they all have heard and know the Ten Commandments. For the next three chapters of Exodus many more commandments, social laws and civil duties are given to Moses to relay to the people.

Moses writes down all of these commandments and presents them in book form whereupon the Hebrews swear to uphold God’s laws (Exodus 24:4-7). God then calls Moses back up the mountain (he’s already gone up and down a ton of times already, poor old man) to give him the stone tablets He (God) will write containing what we assume to be all the commandments mentioned so far (Exodus 24:12). Moses goes up and gets even more information for the next 40 days and nights. God then writes on two stone tablets the terms of the covenant between the people and himself (Exodus 31:18, 32:15-16). Clearly this seems to be way too much information to be contained on just two stone tablets, so we surmise that the ten audible laws mentioned previously are the terms of the Covenant. All the other laws are given privately to Moses and are explanations and details as to how to fulfill them.

While Moses is on Mount Sinai, his brother, Aaron, is convinced by the faithless people to make a golden calf for them to worship and a wild orgy ensues (Exodus 32). Mind you, this isn’t even six months after leaving Egypt and seeing numerous miracles and after actually seeing and hearing God and vowing to uphold his commands! Upon seeing this sacrilege, Moses smashes the original tablets at the foot of the golden calf and calls the people to his side who want to be faithful to God; the tribe of Levi (his own tribe) rallies behind him, going through the camp and killing all the ringleaders of the rebellion and the most wicked (Exodus 32:29). Moses goes back up the mountain to plead with God to spare and forgive the rest of the people. In response, God sets up the tent of meeting where he meets Moses face-to-face and people can come and see his glory as he talks to Moses (Exodus 33).

This brings us to the chapter you identified: chapter 34. In the early parts of this chapter, God reiterates many of the things He has already said in earlier chapters. This is a reminder of the covenant which the people swore to uphold, but have already broken. He writes all this down, but on the stone tablets he writes the terms of the covenant (an emotionally binding contract between two parties) which are the ten God already gave audibly to the people. Here is another translation of the verse to which you refer; you can check out many more for yourself.

Rob Bryceson is the pastor of 1st Covenant Church.

Previous Can pastors make a comeback after scandal? One Baptist tries
Next Pub Talk tonight at Faith and Music