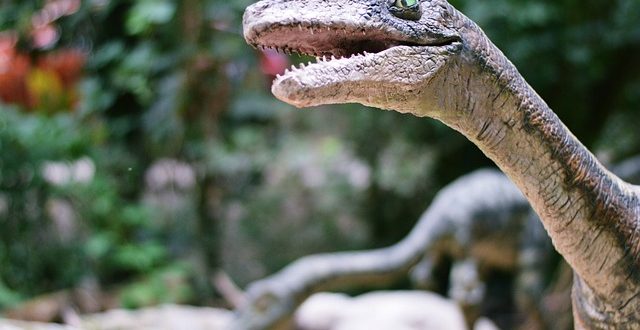 Ask An Evangelical: What do you believe about dinosaurs?

What do Evangelicals believe about dinosaurs?

This question is probably best answered by discussing how the creation accounts in Genesis chapter 1 and 2 are interpreted. Believe it or not, there are actually a lot of differences of opinion within Evangelical circles. How a person interprets the Genesis account determines their view of where to put dinosaurs.

For the record, Genesis 1 simplified says God created the world in basically this order:

Day one – Light and darkness
Day Two – Sky (heavens) separates the waters above from the waters below
Day Three – Water on the ground is separated creating dry ground and vegetation
Day Four – Lights in the sky, sun, moon, and stars
Day Five – Water creatures and birds
Day Six – Animals and mankind (male and female)
Day 7 – Rest

Genesis 2 then goes into detail about the creation account of humans. At a glance there are some discrepancies to resolve. First off, most Evangelicals don’t view these two chapters as two totally different accounts written centuries apart and the later put together in a mashup passed down to us. We tend to hold the view that Moses wrote all of Genesis using a combination of oral tradition passed down the ages and direct Revelation of God.

Hebrew literature often used inversion. This means they would tell the whole story of days one through seven and then go back and highlight day six in chapter two. You will notice in chapter two the creation order is Adam, vegetation, animals, woman. So is vegetation made on day three like Genesis 1 says or day six like Genesis 2 says?  It helps to know there are different Hebrew words used for vegetation.  Day six in Genesis 2 means specifically cultivated plants. Chapter two – God is referred to as Elohim (a plural name but used with singular verbs). It means the All Powerful Mighty One.  In chapter two God is called Yahweh (personal name) showing a more intimate and personal relationship. This is the name Moses received from God at the burning bush which basically means – “I Am”, the Continually Existent One.  For Evangelicals these aren’t two accounts because of the different names, its one author emphasizing different characteristic s of God according to the content of the chapter. Chapter one emphasizes God’s mighty power creating the world. Chapter two emphasizes his intimate and personal relationship with his creation of mankind.

By the way the 4,000 BC date is not in the Bible it’s a view postulated by a lone bishop who counted all the generations mentioned in the Bible and counted backwards. It’s pretty much universally agreed he got it wrong because Hebrews didn’t count generations like we do. They will skip some or go from most famous to most famous.

Here are six views held by different Evangelicals on how to interpret the Genesis creation accounts with their pros and cons.

In Genesis 1:1 heavens and earth were created around 4.5 billion years ago. There is then a gap between 1:1 and 1:2, during which dinosaurs reigned and the fall of Satan happened. 1:2 is then translated – The earth BECAME formless and void. The death of dinosaurs goes here. The prophet Jeremiah uses the exact phrase “formless and void” in 4:23 meaning judgement, giving some credence to this position. 1:3 is then a recreation of the world. It gets remade and mankind is inserted here.

Genesis 1:1-2 is the original creation and 1:3 and following are the eras of geological history. So each day isn’t a 24 hour period but roughly a geologic “age.” Mankind evolves but at some point in evolution God “inserts” his image making Adam and Eve human and not animal. This comes down to how to interpret the word “day.” For instance 2 Peter 3:8 says “With the Lord a day is like a thousand years, and a thousand years are like a day.” There are also other passages in the Bible where a day is not a 24 hour period, like when the phrase “Day of the Lord” occurs.

In six literal 24 hour periods, God created a young world that looked old. In this view creation is either a strict 4,000 BC creation date or a date somewhere between 10 -50,000 years ago.

In six literal 24 hour periods, God created the world. Creation is either a strict 4,000 BC creation date, or a date somewhere between 10 -50,000 years ago.  In this view mankind and dinosaurs lived concurrently. It postulates that our modern dating methods of science are inaccurate guesses. Often those who hold this view also postulate that the world was radically altered at Noah’s Flood so all bets are off dating because the entire earth including the atmosphere totally changed.

This one is trickier to explain. It says that each day is not a day describing creation but it’s describing the six days in which God told or showed Moses what He did to create the world and Moses wrote it down. So it goes more like; “on day one God told me he made the heavens and the earth. The next day he told me . . . .”  You get the idea.

In this view the creation account is not and never was meant to tell how God created or how long it took – it’s a propositional attack against the pagan cultures of Moses’ time which all taught the world was created through some warfare of the gods. So Moses only wrote this to poetically explain that One God is master and Lord of heavens, water, earth, animals, birds, reptiles, insects, and mankind – ONE GOD  is therefore ruler of it ALL!

Previous Who are Jehovah’s Witnesses?
Next Volunteers clean up graffiti after Salish school break-in