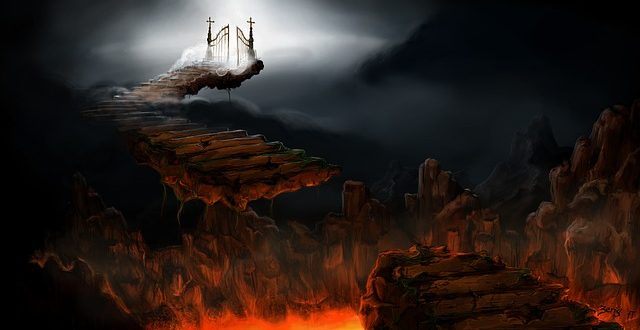 Ask An Evangelical: Are Jews Going To Hell?

Are Jews going to hell?

This is the second in a two-part answer.

Hi, thanks for writing. I’d like to answer your question with a question.

Why do you think hell is real at all? And if it is real, what’s the point in making it such a big motivator for our behavior? I know growing up as a Christian I was taught hell was the place you went if you didn’t believe in God (which meant basically everyone else) and was also the place you went if you sinned and did not repent. That’s a strong reason to tell people about Jesus, right? Does anyone want someone they love to go someplace like the hell that was described to us? I know I didn’t, and I certainly didn’t, and don’t, want to end up anyplace like that.

Like a lot of things in Christian culture, the concept of hell something we’ve been taught, and we focus on a lot, because dividing lines like this make it easier to make sense of life. If we know about hell, we have a reason to get it together and believe. We have a clear, bright line to draw around who’s in and who’s out, and an easy reason to believe it ourselves.

Yes, there are places in the Bible that mention hell. The etymology of those words can be debated all day long. The main players are Sheol, Hades and Gehenna. Gehenna, Greek for the Hebrew Gehinnom, is a place outside Jerusalem where people used to perform child sacrifices. It was undeniably a bad place. But, importantly, an earthly place. Sheol is described as a ‘place of the dead.’ But it’s confusing, because in some areas, it’s mentioned as a permanent place, but in others it gives the idea of a temporary place, like purgatory. The Bible also mentions Hades, the Greek for the underworld. There are other names for underworld-like places scattered throughout the Bible, but to keep you awake, I won’t name them all. All these places sound bad. But as Tim Chastain over at Jesus Without Baggage points out, they don’t actually cohesively add up to the fiery, otherworldly pit concept most of us associate with hell. There’s a whole other set of verses on ‘the book of life’ and who gets into heaven, but that’s another conversation.

The main point I get from all of this, honestly, is that we may not know what the hell we’re talking about when it comes to hell. And how can we? No one alive has been there, or been back to write about it. The text we do have on it is confusing and sparse. I know I don’t feel comfortable looking at you and saying you’re going to hell, if it exists, based on these texts.

Here’s why I think the concept of hell makes things easier for many people. It does the dividing for us. It answers the hard questions so we don’t have to.

We don’t have to think too much about  things like ‘but how does that person raised in the household of another religion really get a fair chance to hear about Jesus?’ And if she did, what would make her switch camps? Would she be afraid of going to Christian hell, any more than I’m afraid of going to her religion’s version of hell?

And the hardest question, in my opinion, the one I never like to confront; what makes me so different? Why is my religion more superior than that of my Sikh or Mormon or Muslim or Jewish friends? Why do I get to escape into heaven? Questions like this spawn the universalist movement, and many people dismiss them. I can’t though, even though I’m not a universalist by most other definitions. And it’s not just because I think the Judeo-Christian definition of hell is lacking. I think, like a lot of pieces of culture and history, it’s narrative that’s written and controlled by the victors. The ones in charge of the narrative about hell are, conveniently, not going there. Everyone else is. If this was any other story, we’d be crying ‘foul,’ but because it’s about religion, we stand back and say ‘well, I guess God is in control.’

In this case, we’re in charge of this message, and we’re mangling it. No one knows exactly what happens when we die, but why does our motivation have to be focused on the afterlife at all? Can’t we be good to each other simply because it’s the right thing to do, and if we ascribe to the Christian religion, we’re called to do so anyway? We don’t need the threat of hell for that. I’d argue anyone who’s here because they’re afraid of hell is going to get going when things get tough. Multiple studies show extrinsic motivation is not good fodder for lasting change. So I don’t know for sure if Jews are going to hell. I really hope not. I would like to think any afterlife punishment, if it exists, is not solely based on what religion you held in this life, but rather the content of your heart and character and soul. I don’t get to pick, though.