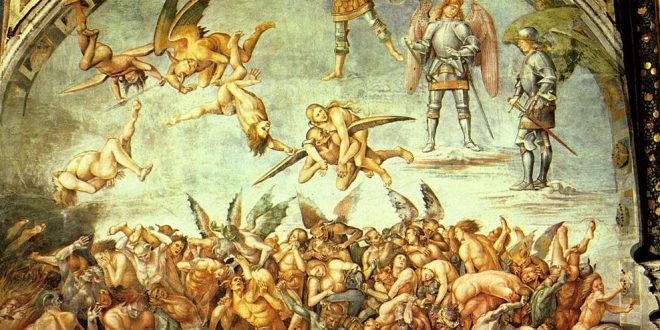 A fresco in the cathedral of Ovieto. This fresco is called The Condemned. It was painted by Luca Signorelli, about 1450.

Ask An Evangelical: Are Jews Going To Hell?

Are Jews going to hell? Heaven? Some third option?

I’m not qualified to assess who does or doesn’t go to heaven or hell. That judgment is reserved for God Almighty alone.

We humans can only assess people as they have been in the past and somewhat as they are in the present. We never know a person’s true heart or their secret thoughts; only the Lord knows these. God’s judgment will be at the end of one’s life and we don’t know what changes will occur or what mercy or grace will be bestowed on any one person in the future. So again, I try not to make sweeping remarks about the eternal destiny of others. Judaism and Christianity both teach an end-times resurrection of all who have lived followed by a Day of Judgment, but people are judged as individuals. Because of this, I think it’s impossible to sweep whole groups or categories into a common pot.

Though there are contemporarily two main camps of thought in Christianity regarding Judaism, the hot debate in the early New Testament times was “How Jewish do these new Gentile converts have to be?” It turned out, not very. Today, one group of Christians thinks that Israel ceased to be the chosen people of God at the rejection of Jesus (Matthew 21:33-46 especially verse 43), mentally inserting “Church” when reading promises to Israel. The other group thinks that God sees the Church and Israel as two distinct groups and that we are presently in the Church Age, which has been referred to in the New Testament as “the times of the Gentiles” (Luke 21:24). Nearing the end of the Church Age (perhaps concluding with the rapture?), God will fulfill all the promises he gave to Abraham and Israel, which becomes relevant as we address distinctions in eschatological judgement. The first camp was more dominant until 1948 when Israel became a state. Most Evangelicals I know are in this second camp. Romans 11 speaks of Gentiles as being partakers of the promises of Abraham — wild branches “grafted in” to the main trunk of the “olive tree” of Israel. I’m personally in the latter group.

Many Christians focus on a heaven-or-hell binary, but some submit a third option. The Old Testament is somewhat silent on the status of life after death. Sheol, the grave, is the typical term applied to the state of death and it’s worth a word-study all by itself. Jesus tells an incredible story in Luke 16:19-31 about a righteous poor man named Lazarus (not the same Lazarus he raises from the dead in John 11) and an unrighteous rich man who knew Lazarus in life. Lazarus is being held in a place called “the bosom of Abraham,” a place of peace and contentment, and he can see across the wide chasm to witness the torment of the unrighteous rich man. What is this place? It isn’t heaven and it’s not hell. Many Christians think this place is where the righteous, departed Jews were kept until the resurrection of Jesus, at which time he descended into Sheol (I Peter 1:19) and broke open that area and took them all to paradise (Ephesians 4:8-9 read the NASB; the NIV misses it).

As an Evangelical Christian, I believe Jesus Christ of Nazareth is the one mentioned in Daniel 7:11, (see below) the “Son of Man” who is given authority by the “Ancient of Days.” I believe Jesus also to be the promised “Son of David” who will sit on the throne at the end of time ruling the world from the New Jerusalem coming down from heaven. This is why his genealogies listed in Matthew 1 and Luke 3 are important. If you read them and line them up, they aren’t the same. Matthew’s list has familiar names from the Old Testament, Luke’s diverges. Many scholars think Matthew’s is the line of Jesus’ earthly father Joseph showing he had the right to be King from the line of David through Joseph. It kind of explains why Joseph was living way the heck and gone up in Nazareth when his hometown was Bethlehem, the city of David. Herod the Great had a knack for killing off anyone who had any kind of claim to the throne. Many scholars think Luke’s line is Mary’s lineage showing Jesus was also biologically connected to David through his DNA. Jesus is the Christ (the anointed one) The Son of Man (representative of humankind) and the Son of David (the prophesied ruler who will sit on the throne of Jerusalem to rule the world). If the ruler on the throne at the end of history is the Son of David and Jesus The Christ, are we all Jews or are we all Christians? Are we still two distinct groups?

“’I kept looking Until thrones were set up, And the Ancient of Days took His seat; His vesture was like white snow and the hair of His head like pure wool. His throne was ablaze with flames, its wheels were a burning fire. A river of fire was flowing and coming out from before Him; Thousands upon thousands were attending Him, and myriads upon myriads were standing before Him; The court sat, And the books were opened. Then I kept looking because of the sound of the boastful words which the horn was speaking; I kept looking until the beast was slain, and its body was destroyed and given to the burning fire. “As for the rest of the beasts, their dominion was taken away, but an extension of life was granted to them for an appointed period of time. I kept looking in the night visions, and behold, with the clouds of heaven one like a Son of Man was coming, and He came up to the Ancient of Days and was presented before Him. and to Him was given dominion, glory and a kingdom, that all the peoples, nations and men of every language serve Him. His dominion is an everlasting dominion Which will not pass away; And His kingdom is one which will not be destroyed…’” Daniel 7:9-14, NIV

Rob Bryceson is the pastor of 1st Covenant Church.