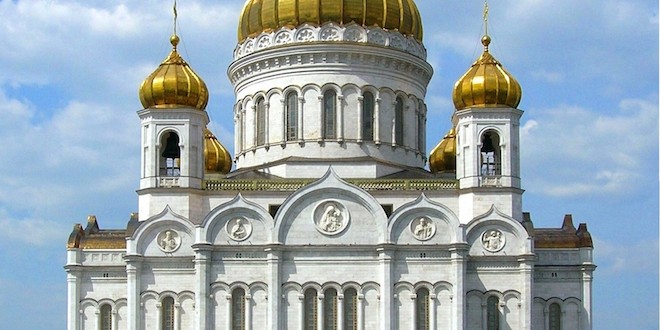 Cathedral Church of Christ the Saviour in Moscow/Wikipedia

In my experience with Orthodox Christians, there has been a strong apologetic that Orthodoxy is the THE church to be part of, if you want to be in the correct church. The Catholic church positions itself with the same attitude. Why is this?

For some understanding to this question, let me define some terms.

The word Orthodoxy, from the Greek orthos (‘straight’, ‘correct’) and doxa (‘thought’, ‘teaching’, ‘glory’), is used to refer to the correct theological or doctrinal teachings of Jesus Christ and the apostles.

The historical Christian Church from the beginning and for the first 1,000 years was essentially one church known as the Orthodox Church.  It consisted of five historic patriarchal  centers — four Eastern Sees, Jerusalem, Antioch, Alexandria, Constantinople and the See of Rome in the West.

When Christ established his church, he said “….the gates of Hades shall not prevail against it (his church)” Matt 16:18.  That Christian Church that Christ referred to is  known as the Orthodox Church, which in the beginning Rome (in the West) was very much a part of.  This why you could see Rome’s claim to being part of the original  Church.

In the Orthodox Church (or the Eastern Orthodox Church) we have not added to the faith, nor subtracted anything from any part of the original teachings of Christ and the Apostles.

The church from the beginning was in its structure always ecumenical (the representation of the whole body of the church) and conciliar (each bishop or representative including the patriarchs having one equal vote and most importantly decisions in council had to be unanimous). This church was always a living breathing organism, a divine human body with Christ as its head.

The Eastern Orthodox Church is a means to reach that state of being, not only through justification, but where we may become what we were created and designed to be through sanctification (theosis, the process of healing to become more like God) by becoming part of and immersing oneself in that Body of Christ.

I hope I have answered your question, however I would have a question for you, not as a scriptural shoot out, but for a greater understanding of how someone outside the Orthodox Church (I am assuming you are) would respond to the following:

If that same Orthodox Church still exists from the beginning, which it does, why the need for another interpretation of the Christian Faith in another church?  Saint Paul points to this Church in Corinth and says “To the Church of God,” what more proof must one need?

Also I might add some additional validity of the church. Does not Scripture state in 1 Tim 3:15 ”that you may know how to conduct yourself in the house of God, which is the Church of the living God, the pillar and ground of the truth.”  Who put the Bible together?  It was the ecumenical and conciliar Orthodox Church, not the NY Times.

One of the tragic aberrations of so-called modern religion is the presence of “Churchless Christianity.”  The assertion that it is Christ who saves us, not THE Church, so “all you need is Jesus.”

The Church is not a museum of saints, but a hospital for sinners as Christ embraced those sinners in the Scriptures. Come, I encourage you to come taste and see, if your heart is open, you might not ever be the same again.

May God continue to instill in you his presence and understanding, your question was very challenging and thank you and I humbly ask your forgiveness if I have offended you in any way with my response.

Previous Faith doesn’t have to mean intolerance
Next Ask an Atheist: Why do we die?