Ask An Atheist: Why do you pose ‘annoyingly hard’ questions to Christians?

Why do most atheists ask annoyingly hard questions like, ‘if God created man then who created God?,’ the moment someone reveals that they’re Christian? 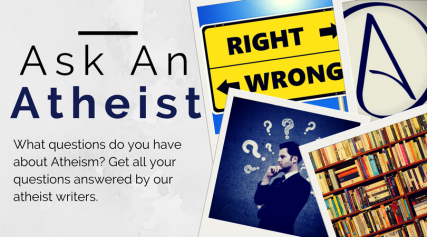 I’m not so aware of atheists framing the question in that context so narrowly. The usual context is the basic Uncaused Cause one, where advocates for a fairly generic “God” (though typically when pressed it turns out to be only their own version of that) as having to be responsible for making the Universe, get pressed as to why that extra step of a god is necessary.  In other words, why can’t the universe be itself an Uncaused Cause?  In practice, this is a presuppositional argument where a “God” is assumed as necessary (William Lane Craig among others is quite wedded to it).
Packed in the questioners’ version are two more specific issues: first, why should we believe that humans must have been intentionally designed at all?  And what exactly did this designer event entail?  A population of humans materializing out of nowhere?  If so, when and where?  The biblical just Adam and Eve model doesn’t bear scrutiny in the light of modern genetics, and that remains so quite independent of whether that god may have been doing other making previously (like the universe, a whopping 13 billion years earlier).  But it’s more general than just the Bible version.  Any theistic model for human origins must be able to account for all the data, from fossils (a parade of increasingly human behaving hominids stretching back many millions of years) to the genetics, such as our chromosome 2 (formed by a fusion of the two standard primate chromosomes), to the replicating clutter of Alu retrotransposons in our genome (another inheritance from the primates), to how we engage in self-deception using the anterior cingulate cortex (a brain system primates use as a means of resolving social conflict).  Even something so trivial as whether you like broccoli or not turns on whether our inherited primate distaste for fruit that’s gone bad is still operating (the broccoli lovers will have one or more parental copies of the gene in question shut down).

None of that data goes away regardless of whether any gods were involved in our origins.  But the second packed matter concerns why the focus on just Christians?  Of course our culture is predominately Christian, so that frame is the common one encountered.  But religious explanations for human origins stall across the board.  All extant religions are comparatively recent (barely a few thousand years) and so are far removed from any active traditions handed down over the hundreds of thousands of years since our species split off from the Homo erectus kin in Africa.  It simply wasn’t in the historic mythical frame to recall enough data to arrive at a reliable accounting of how our species got here.  Congenial tales were made up, which differed across the globe depending on what things were of paramount concern.  But none of them imagined populations of hominids generating a new form by allopatric means (geographical spread and differentiation), let alone which among them would end up liking leafy green salads with broccoli.

To the extent that religious discussions of god(s) act as placeholders for an explanation, rather than an explanation itself, skeptics are going to inquire where the origins game stops.  Who created “God” (and just the one?) inevitably among them.

Join FāVS for the next Coffee Talk at 10 a.m, Oct. 6, at Saranac Commons, where some of our “Ask” columnists will be featured. Downard is a panelist.

Previous Journalism’s most unethical day
Next We Won’t Get Out Alive: A Christian Response to Active Shooter Situations