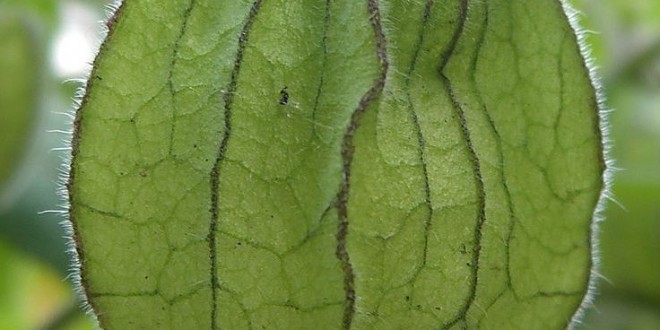 Calyx of unripe Cape gooseberry, Physalis peruviana. The sepals enlarged rapidly after pollination and form a covering to protect the fruit in its unripe state/picture taken by Philipp Weigell

Ask An Atheist: How can we explain fruit without a creator?

How can we explain fruit without a creator? Let alone the problem of the first cause. Fruit has a protective shell that does not advantage the tree; it only benefits man. True science reveals the need for a creator — quantum physics’ biggest problem is determining how one thing happens over another.

The notion that the “protective shell” of fruits “does not advantage the tree” will be news to botanists, who have known for some time how the genetic diversity of plants often critically depends on as wide a dispersal mix as possible, and hardy coverings facilitate that by staying longer in the digestive tracts of those animals (distinctively vertebrates) that eat them.

The theoretical dynamics of this process have been worked out in detail, such as the 2003 analysis by Lewin et al. There has been considerable evolution of all this over time, of course, again covered in many science papers. Pedro Jordano is a nice 2010 overview of some of that work.

The deep biological origins of fruit coverings from plant seed ovules has also been a subject of ongoing study, tracing back deep in plant evolution to the diversification of the MADS-Box gene cluster, work done only quite recently, such as this 2012 paper.

The leap from plant biology to the governing fabric of the universe is extreme, but let’s follow it anyway. The “problem of the first cause” is one of those persistent tempests in philosophical teapots.  The Universe could just as easily be an Uncaused Cause as any god(s) believers feel obliged to pencil in.  Whether or not any god(s) were involved in why there is the universe we can see, the details of what has been discovered offer scant support for any of the many religious candidates offered for them.

For example, the sun, moon and stars are not even slightly younger than the Earth and plant life, as the Biblical Genesis tale stipulates for the fourth creation day (a story not even originally wrong, but an error cribbed second hand from the Mesopotamian creation stories worked into biblical lore during the Babylonian Captivity).

I have delved into a lot of these matters in the “Dinomania” (on the zany world of Young Earth Creationism) and “Cruz the Bible Tells Me So” (on the parallel world of Kulturkampf religious apologetics) “Troubles in Paradise” chapters at www.tortucan.wordpress.com. Comments and questions are welcome there as well.

So whatever wonderments there may be deduced about seed plant coverings, it doesn’t provide a shoehorn verification for the biblical stories in general (or any other known religious origins tradition).

As for quantum physics, I am unclear what the questioner thinks they mean by a supposed problem there in “determining how one thing happens over another.”  Quantum physics involves probability, true, but in the end the probability waves operate with a mathematical precision.  It works, and so well that the solid state physics your computer microprocessors rely on are describable with extreme reliability.

Now if any religious texts had shown the slightest indication that their inspirational sources were aware of the nature of quantum physics, or MADS-Box genes, or why so many Cretaceous Era plants looked the way they did and not quite yet like the ones we have now, that would be impressive.  But that’s not what we get.  We get jealous beings doing magical things having more in common with the Sinbad and Ichabod Crane imaginative fiction mode than what can be studied in the vast science literature.

There is indeed a lot of True Science out there, and I heartily recommend people read more of it.

Previous Preserving Trees: Environmentalists Reach Out To Faith Leaders
Next Casting Stones of Peace at the Parliament of World’s Religions