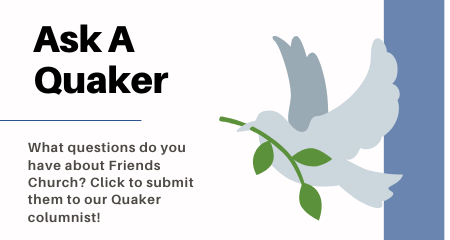 Ask A Quaker: How are Quakers different than Mennonites?

Ask A Quaker: How are Quakers different than Mennonites?

What do you want to ask a Quaker?  Fill out the form below or submit your question online.

How are Quakers different than Mennonites?

Along with the Church of the Brethren and Mennonites, Midwestern Quakers, by and large, share a few things with that segment of the Christian community which self describes as ‘anabaptist’ or “re-baptisers.” These tend to be the peace churches. They reject the more liturgical church’s practice of the baptism of children, opting rather for the baptism of adults. A great variety of ‘Baptists’, while not identifying with the peace church perspective, would be seen included in those who embrace Believer’s Baptism. So, I’d say the Quakers, at least a large segment of the fellowship who see themselves as Biblically grounded, whether they understand it or not, are part of the community of faith which supports the notion of Believer’s Baptism.

In the New Testament we find John the Baptist doing his thing — providing to Jews a ritual washing that was used most typically for persons not born of Jewish parents who wanted to be considered Jewish. John evidently used it as a way of declaring that despite one’s birth or having been ritually circumcised these followers of his needed to be ceremonially cleansed. In Matthew 3 we find this: “Then Jesus came from Galilee to the Jordan to be baptized by John. But John tried to deter him, saying, “I need to be baptized by you and do you come to me?” Luke 3:16 and Matthew 3:11 say that John the Baptist, referring to Jesus, said: “I baptize you with water for repentance. But after me comes one who is more powerful than I, whose sandals I am not worthy to carry. He will baptize you with the Holy Spirit and with fire.” The words of Mark 1:8 is similar. Early Quakers found this language from the three synoptic Gospels quite persuasive.

They found further support in the Book of Acts. The apostle Luke begins his book of Acts this way: In my former book, Theophilus, I wrote about all that Jesus began to do and to teach until the day he was taken up to heaven, after giving instructions through the Holy Spirit to the apostles he had chosen. After his suffering, he presented himself to them and gave many convincing proofs that he was alive. He appeared to them over a period of forty days and spoke about the kingdom of God. On one occasion, while he was eating with them, he gave them this command: “Do not leave Jerusalem, but wait for the gift my Father promised, which you have heard me speak about. For John baptized with water, but in a few days you will be baptized with the Holy Spirit.”

Luke begins the second chapter of the Book of Acts with these words: When the day of Pentecost came, they were all together in one place. Suddenly a sound like the blowing of a violent wind came from heaven and filled the whole house where they were sitting. They saw what seemed to be tongues of fire that separated and came to rest on each of them. All of them were filled with the Holy Spirit and began to speak in other tongues as the Spirit enabled them.

So, Biblically grounded Quakers (and the Salvation Army) have thrown in their lot with the Holiness movement and some within the Pentecostal churches and hold that water baptism, whether one is sprinkled, dipped or dunk, is at least unnecessary and possibly a distraction from the tougher challenge of awaiting the Holy Spirit to come upon a person and change the direction and focus of their life.

In Ephesians 4 the author writes: I therefore, the prisoner of the Lord, beseech you that you walk worthy of the vocation wherewith you are called, with all lowliness and meekness, with longsuffering, forbearing one another in love; endeavouring to keep the unity of the Spirit in the bond of peace. There is one body, and one Spirit, even as you are called in one hope of your calling; one Lord, one faith, one baptism, one God and Father of all, who is above all, and through all, and in you all. But unto every one of us is given grace according to the measure of the gift of Christ. Quakers have held that the one baptism is the Baptism spoken of in Acts and the Gospels.

I’d suggest that you read Micah Bales’s sermon: “Quakers Don’t Baptise with Water – should we?”

Previous Holding On In The Letting Go In A Pandemic: Not Alone in Isolation
Next Christians in Spokane reckon with moral duty to receive COVID-19 vaccines