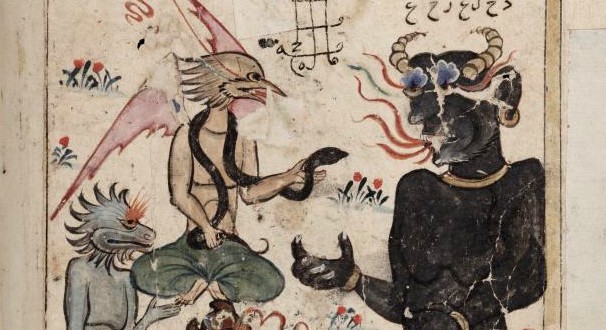 The black king of the djinns, Al-Malik al-Aswad, in the late 14th century Book of Wonders

Ask A Muslim: What was Satan?

If angels don’t have free will, what was Satan?

In Islamic theology Satan was a jinn. According to Muslim teachings, jinn are a sapient creation by God, and they predate the creation of humankind. The discussion on jinn and their characteristics is deep in Islam. For the purposes of this column, I will describe the basic features and purpose of jinn.

There are no clear physical descriptions of jinn. We know that they have some humanlike features, but the Quran and Hadith do not specify the details. Before God created Adam, jinn were the only creatures in heaven. Once Adam was granted life and the ability to reason and contemplate, God ordered all of the angels and jinn to prostrate to Adam as a sign of respectful amazement toward God’s creation. Satan refused to prostrate because he believed that he was a superior creature since Adam was created from clay, while he was created from fire (Quran 7:11-13). Muslims understand that Satan’s arrogance was the reason for his banishment from heaven.

In Muslim thought, jinn occupy the earth alongside humans, but in their own realm, and they are invisible to us. They have the ability to cross into humanity’s realm, but humans cannot cross into the realm of jinn. Since jinn are sapient, they practice a variety of religions, including Islam and Christianity. The jinn that follow Satan are the equivalent of demons in Christianity. In other words, all demons are jinn, but not all jinn are demons. The evil jinn make it their mission to negatively affect human behavior in order to spiritually separate people from God.

Jinn serve as a reminder to humanity that we have weaknesses when it comes to our faith and spirituality. They are a force that compels us to work harder to be better parents, children, neighbors, etc. It is by controlling the impulses that jinn represent (anger, hate, greed, arrogance, etc.) that enable us to mature and foster a closer relationship to God. Ultimately, if we didn’t have the contrast of evil, we would not be aware of what it means to be good.