Ask A Mormon: Is there a Mormon shift on how LGBT people are viewed?

Do you think there is a shift happening in the LDS church (or will be) on how LGBT people are viewed? 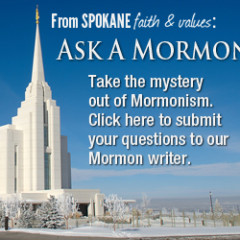 There has definitely been a shift in The Church of Jesus Christ of Latter-day Saints over the last several years to a “kinder, gentler” view of LGBT people. A major change has been the Church’s relatively recent recognition that a person’s sexual orientation is not a choice and “should not be viewed as a disease or illness.” The official Church stance regarding homosexuality now — “the attraction itself is not a sin, but acting on it is” — is significantly different from what it once was, but we still have a long way to go to ensure that LGBT people feel consistently loved and welcomed in our congregations.
In 2012, the Church launched www.MormonsandGays.org, featuring videos of top Church leaders urging love and compassion for those “struggling with same-sex attraction.” The website shares the stories of many members of the Church who either are gay or have family members who are, and how they have reconciled their sexual orientation or that of their loved ones with their religious faith.
Others are sharing their stories as well: Joshua Weed, Tyler Glenn of Neon Trees, Mitch Mayne, Laura Dulin, Ty Mansfield. BYU students created a moving “It Gets Better” video that has garnered more than a half a million views on youtube.  Tom Christofferson, the younger brother of one of the current Apostles, recently spoke at a conference in Utah and told of his parents’ loving and inclusive response when he came out to them. We’ve come a long way since Carol Lynn Pearson published her ground-breaking book Goodbye, I Love You more than a quarter-century ago.
When I was 11, I learned that my mom’s younger brother, my Uncle Bob, was gay. Having only the vaguest idea of what that meant 25 years ago, I was confused and worried about what I would do the next time the extended family got together. But then I saw him and he was the same Uncle Bob I remembered, the same irascible grin and boisterous laugh, the same sparkling eyes and ready wit, the same willingness to talk to his 11-year-old niece as a peer — unlike so many other adults — and I ran to get wrapped up in one of his great bear hugs. I knew that he loved me and that I loved him and that was what mattered.
Sharing these stories is beginning to break the stigma surrounding homosexuality in the Church. As more members of the Church get to know LGBT individuals and their families at work, in the community, among their own loved ones, attitudes and opinions will continue to shift and change.
The Church endorsed the Boy Scouts of America policy change allowing openly gay boys to be scouts. The Church has also supported expanding non-discrimination legislation in Utah to include sexual orientation, and measures to extend medical benefits and other legal protections to same-sex partnerships. Since 2007, Church-owned Brigham Young University no longer expels students for being openly gay, though “homosexual behavior” is still grounds for expulsion.
Groups such as Mormons Building Bridges and Affirmation have formed to support LGBT members of the Church and their families. Several prominent members (Marie Osmond, Steve and Barb Young, Harry Reid) have come out in support of LGBT issues, including marriage equality. Others vocally support “traditional marriage” while urging kindness and tolerance.  It’s worth noting that in his first press conference as President of the Church in 2008, Thomas S. Monson indicated that there was room in the Church for members of good standing to have political differences of opinion regarding same-sex marriage.
Most Latter-day Saints I know were horribly embarrassed a few months ago when a prominent Mormon blogger posted a long-winded and nonsensical diatribe about the “gay agenda” hidden in the Disney movie “Frozen“, and many denounced her rambling as the ridiculous fear-mongering it was.
We’re getting better at talking the talk and walking the walk, but we as a people still have a long way to go. One courageous family whose teenage son is gay has spoken about the shunning they experienced in their local congregation when his sexual orientation became known. After enduring several months of un-Christian behavior from those who had been their friends, they switched to another LDS congregation where they were welcomed warmly. The Montgomery family’s experience has been documented in a short film called “Families Are Forever”.
My heart breaks whenever I hear about another LDS youth kicked out of his or her home after coming out as LGBT to his or her parents. Of course, this is not exclusive to LDS families, but as Elder Quentin L. Cook, one of the current Twelve Apostles, has said, “As a church, nobody should be more loving and compassionate. Let us be at the forefront in terms of expressing love, compassion and outreach. Let’s not have families exclude or be disrespectful of those who choose a different lifestyle as a result of their feelings about their own gender.”
The biggest problem I see is that in too many conversations within the LDS community, LGBT people are still viewed as “other,” as “them” instead of as part of “us.” While the pendulum is swinging closer toward compassion, more of us need to see LGBT individuals as our people, because they are. They are our brothers, our sisters, our daughters, our sons, our friends, the people sitting next to us on Sunday and those who used to sit with us but made the difficult choice to leave in order to maintain their sense of worth and dignity.
One of my favorite tenets of the LDS faith is that of continuing revelation, linked with the concept of eternal progression. Our 9th Article of Faith states that God “will yet reveal many great and important things pertaining to the Kingdom of God”. Therefore, there are always ways for us to improve and there’s always more for us to learn. I have hope that we’ll continue learning and doing better by our LGBT brothers and sisters, both as a church and as individuals.