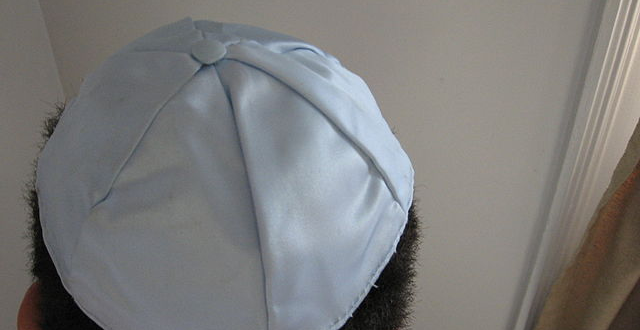 Yarmulke (kippah) in a common style found at Reform and Conservative bar and bat mitzvahs./Wikipedia photo by Rickyrab

Ask A Jew: Why do Jews Wear Yarmulkes?

Ask a Jew: Why do Jews wear yarmulkes?

The custom of wearing head-covering discs of fabric, known as yarmulkes or kippot (singular: kippah), is probably one of Judaism’s most widely recognized traditions. As a child, I learned that covering your head in a sacred space, such as a synagogue sanctuary, expresses humility in the presence of God. Apparently, the Lord Almighty isn’t especially fond of watching a sea of bald spots bow in prayer.

Rabbi Baruch S. Davidson, writing for Chabad.org, explains kippot somewhat differently: “The tradition to wear a kippah is not derived from any biblical passage. Rather, it is a custom which evolved as a sign of our recognition that there is Someone ‘above’ us who watches our every act.” According to the Talmud, kippot are meant to remind us of God’s constant presence. That reminder, in turn, is expected to have a positive effect on our behavior.

The rabbi also explains how the ritual of kippah wearing trickled down from the elite to the masses: “In Talmudic times, the practice of wearing a headcovering was reserved for men of great stature. In later generations, though, it became the accepted custom for all Jewish men to wear a kippah at all times, and especially during prayer. As with all Jewish customs, once they become a universally accepted Jewish practice, they become halachically obligatory.”

Today, even non-Jewish visitors to Jewish holy spaces are expected to wear kippot as a sign of respect, much as a visitor to a mosque or Buddhist temple should remove his or her shoes.

Traditionally, women didn’t wear kippot. Today, many female members of conservative, reform, and reconstructionist congregations do. I haven’t spent much time in Orthodox or Modern Orthodox circles, but I suspect that in most such communities women do not wear kippot. Orthodox women may still cover their heads, however, to maintain a sense of tznius (modesty).

Some Jews wear kippot whenever they’re in public, not just during synagogue services. Presumably, this helps to infuse their everyday lives with awareness of God’s presence. Of course, wearing a kippah in public also “outs” the wearer as Jewish. In communities where anti-Semitism is prevalent, revealing yourself to be Jewish to everyone you meet may reflect both pride in your faith and an unwillingness to be frightened into hiding it.