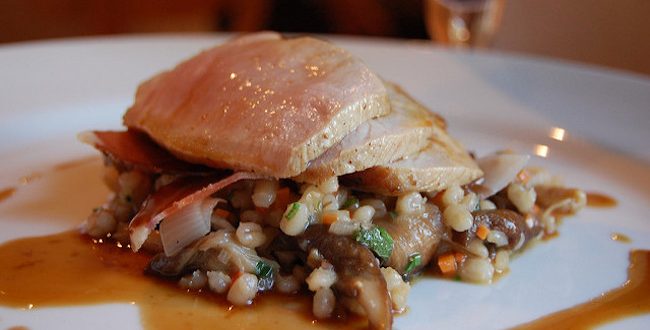 Ask a Jew: Why are Jews so offended by pork?

Why are Jews so offended by pork? If I’m having lunch with a Jewish friend, should I not order a ham sandwich out of respect?

The Torah passage that prohibits pork consumption is Leviticus 11:7-8. In the NRSV, it reads: “The pig, for even though it has divided hoofs and is cleft-footed, it does not chew the cud; it is unclean for you. Of their flesh you shall not eat, and their carcasses you shall not touch; they are unclean for you.”

Pork is one of several kinds of food that kashrut, Jewish dietary law, forbids Jews to eat. Shellfish is another. Based on Jewish law, we are also supposed to refrain from mixing meat and dairy at the same meal, though fish (as long as it had fins) is not considered meat. A Jew who keeps kosher may use one set of dishes for meat and another for non-meat foods.

That said, even most Jews I’ve encountered who keep kosher aren’t so much “offended” by pork as simply committed to abstaining from it. I guess it doesn’t hurt to ask a Jewish friend if ordering a ham sandwich — or, for that matter, shrimp scampi, or a cheeseburger — would bother him or her. Generally speaking, the kind of Jew who would be upset by your order likely wouldn’t be eating at a restaurant that serves non-kosher (treif) food in the first place.

And just to cover all the bases: Some Jews enthusiastically eat pork. In 2014, Modern Farmer published an article titled “Why Some Jews Don’t Feel Guilty About Eating Pork.” One passage appeals to me especially :

“Is your food healing the world or harming it? If it heals, you’re keeping kosher, my kind of kosher,” chef David Levi, who features house lardo and capocollo on the menu of his new hyper-local Portland, Maine restaurant, wrote in a blog manifesto. “If it harms, you’re eating treif … Industrial food is never kosher.”

I grew up eating shrimp wrapped in bacon at my family’s favorite Chinese restaurant. (Is that dish authentically Chinese? I doubt it.) We ate pork at home. We loved shellfish. Of course, as a family we weren’t particularly religious. Today, I’m vegetarian, which I consider to be my own kind of kosher, since it’s more for ethical reasons than nutritional ones.

Long story short, I agree with David Levi: Any food that’s bad for the planet or comes from cruelty isn’t kosher. If you order a ham sandwich when we’re having lunch, I won’t be offended. However, I’d be happier if the pork came not from the ghoulish, immoral factory farming industry but instead from a farm where pigs are treated with the respect that such intelligent, playful animals deserve.