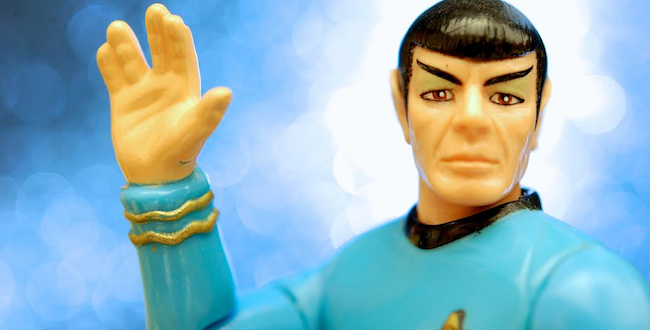 Ask a Jew: What’s the Jewish story behind the Vulcan salute on “Star Trek”?

What’s the Jewish story behind the Vulcan salute on “Star Trek”?

A diehard Trekkie (or, if you prefer, Trekker) asked me this recently, and though it’s an oft-told tale, I don’t think I’ve shared it with FāVS’ readership. Following the 2015 death of Leonard Nimoy, who played Lt. Cmdr. Spock in the original “Star Trek” series, the Washington Post published an article on Nimoy’s “Jewish roots,” as well as those of the famed Vulcan salute, which was usually accompanied by the phrase “Live long and prosper.” The Post article mentions a 2013 interview Nimoy did with the National Yiddish Book Center — well worth watching, by the way — in which the actor described the synagogue scene he witnessed as a child that inspired Spock’s much-imitated hand gesture:

“They get their tallits over their heads, and they start this chanting,” Nimoy says in the 2013 interview, “And my father said to me, ‘don’t look.’ ” At first he obliged, but what he could hear intrigued him. “I thought, ‘something major is happening here.’ So I peeked. And I saw them with their hands stuck out from beneath the tallit like this,” Nimoy said, showing the “V” with both his hands. “I had no idea what was going on, but the sound of it and the look of it was magical.”

After witnessing the ritual all those years ago, Nimoy practiced making the “V” with his fingers as a child. He “never dreamed” he would one day make the gesture so publicly and repeatedly as an adult.

The “V” gesture, he explained in the interview, was meant to imitate the shape of the Hebrew letter shin. That letter begins the Hebrew word shekhinah, a concept Nimoy described as “the feminine aspect of God who supposedly was created to live among humans.” The Shekhinah was also the name of the prayer his congregation was saying as its members made “V” shapes with their hands. The incantation, he noted, was intended to bless the congregation as a whole.

Back in his “Star Trek” days, Nimoy suggested the prayerful gesture could serve as a Vulcan salute when a script called for Spock to return to his home planet for the first time. The actor observed in the NYBC interview that most people, including many “Star Trek” fans, remain unaware of the salute’s origins. Now you, dear reader, can count yourself among the aware!

Previous Ring in the new year with a cultural service at Spokane Buddhist Temple
Next Ask a Buddhist: Can Buddhism Cure Anxiety?