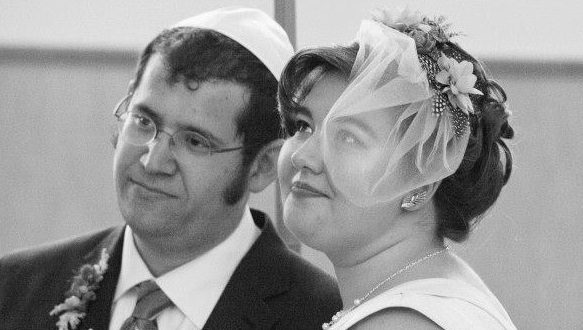 Ask a Jew: What is a Reform Jew’s viewpoint on interfaith marriage?

Q. What is a Reform Jew’s viewpoint on interfaith marriage?

A 2003 survey by the Rabbinic Center for Research and Counseling indicated that at least half of Reform rabbis were willing to officiate interfaith weddings. However, interfaith marriage, as mainstream Judaism understands it, usually means a Jew — religious or not — marrying someone of no strong, well-defined faith. Perhaps the non-Jewish spouse was raised Christian and is now agnostic, atheistic, or “spiritual but not religious.” Perhaps he or she was simply raised without religion.

In any case, to many Jews, “interfaith marriage” doesn’t really mean the coming together of two people of different faiths. Instead, it means the non-Jewish spouse will go along with Judaism as a cultural (and perhaps also religious) framework for the couple and any children they raise.

My wife is Lutheran. I’m Jewish by upbringing and heritage (I have two Jewish parents and four Jewish grandparents). However, I’m not religious. My wife is. Our plan is to expose our child to both of our faith traditions and communities. The alternative — trying to pretend that his mother isn’t Christian, or that his father isn’t Jewish — would be absurd. I think local Reform Jews are mostly fine with this, though some may suspect our son will grow up Christian if we don’t painstakingly steer him away from Christianity, especially here in overwhelmingly Christian Eastern Washington.

And those Reform rabbis who are willing to officiate an interfaith wedding? They almost certainly won’t co-officiate with a pastor. Most rabbis are charged during their theological education with preserving Judaism, which to them means not appearing to promote interfaith marriage if the children of such a marriage won’t be raised Jewish — exclusively Jewish. At our wedding, the officiants were a pastor and a longtime member of my childhood Reconstructionist congregation, which is still my mother’s congregation. Our Jewish co-officiant had known me pretty much since I was born. He has what I’d call a quasi-rabbinic air about him; for us, that gave the proceedings the necessary gravitas.

Even a few  generations removed from the Holocaust, the fear that intermarriage will end Judaism lingers. In some cases, it’s my grandparents’ and parents’ generations worrying that we youngins will screw it all up. In others, it’s people my age or younger deciding that intermarriage is too risky, too likely to “water down” Judaism for the next generation.

What I look for in Reform communities, including Spokane’s Congregation Emanu-El, is for members to accept and even embrace my family just the way we are. My son’s chances of having a substantive Jewish identity will be better if we don’t feel pressured or guilted into raising him according to rigid — and for our family, untenable — guidelines.

We want him to grow up with a solid understanding of what Judaism is all about. But our take on Judaism will inevitably be different from other families’ approaches. Fortunately, Reform is one of the Jewish movements, along with Reconstructionist Judaism and other very progressive branches, that most openly and enthusiastically accept interfaith couples and families.

Previous Ask a Jew: What is a Reform Jew’s viewpoint on interfaith marriage?
Next At annual meeting, Christian Scientists see “new spirit” emerging in society