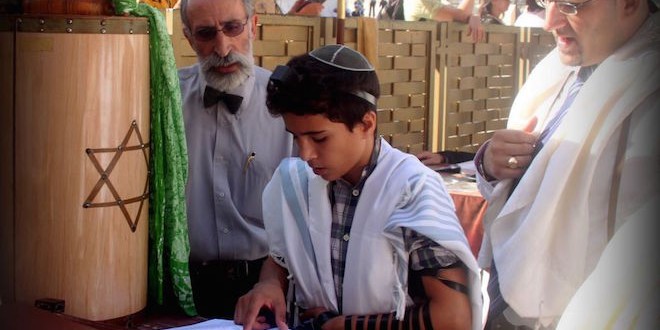 Ask A Jew: What is a Bar Mitzvah, part 2

What is a Bar Mitzvah?

In Reform Judaism, bat mitzvahs, like bar mitzvahs, take place when a child is 13. In Judaism’s more conservative denominations, 12 is the standard bat mitzvah age. That said, a Jewish person may be bar or bat mitzvahed at any age (above 12 or 13). My mother, who is nearly 70, had her bat mitzvah not too many years ago, since she didn’t have one as a young girl.

During a Saturday morning service, a bar or bat mitzvah chants, in Hebrew, some of the weekly Torah portion and/or the haftarah, which contains material from the books of the prophets. The celebration that follows may resemble a wedding: It’s likely to feature music, gifts, and a lavish dinner and include family and friends from out of town. Numerous rights and responsibilities accrue to a bar or bat mitzvah.

These include moral responsibility for own actions, eligibility to be called to read from the Torah and lead or participate in a minyan, may possess personal property, may be legally married according to Jewish law, must follow the 613 laws of the Torah and keep the halakha, may testify as a witness in a Beth Din (Rabbinical court) case.

In modern Jewish society, of course, few 13-year-olds can be found marrying or testifying in Rabbinical court. But in theory, they could.

In the Reconstructionist congregation of my childhood, being bar or bat mitzvahed meant getting to co-lead religious services with more experienced adult members. I have fond memories of composing divrei Torah (commentaries) for the services I helped lead. This, more than any other result of my bar mitzvah, marked a meaningful transition for me from Jewish childhood to adulthood. (I also got to start wearing a tallis, the Jewish prayer shawl).

One last fun fact: It was the founder of Reconstructionist Judaism, Mordecai Kaplan, “who held the first public celebration of a bat mitzvah in the United States, for his daughter Judith, on March 18, 1922.” This is merely one aspect of the Reconstructionist movement’s rich legacy of Jewish progressivism.

Previous Why Spokane Transit Matters To Me
Next Five faith facts about Rand Paul: ‘My faith has never been easy for me’