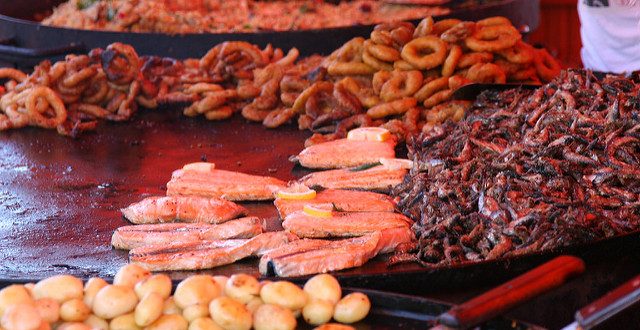 Ask a Jew: What about graven images and sea food?

Does Mosaic law forbid making any statue, or just statues of gods?  Also, what types of seafood are allowed?

Exodus 20:4 states: “You shall not make for yourself a graven image or any likeness which is in the heavens above, which is on the earth below, or which is in the water beneath the earth.” You may be more familiar with it as the Second Commandment. My Jewish Learning has a terrific “Ask the Expert” column on this question, so I’m going to shamelessly draw from it.

The MJL staffer who wrote the site’s response explains: “The most common prohibition, and the one that’s most obvious from the text, is against creating sculptures of people, animals, or planets for the purpose of worshiping them.” She adds that the Talmud “takes a very strict stance against producing images of faces, ruling it forbidden, but sanctioning owning images of faces that were created by non-Jews.” (I think that’s an interesting wrinkle/loophole.) Today, she says, most traditional rabbis are okay with “depictions of the human body that are somehow incomplete,” such as a bust that includes head and shoulders but not the rest of the body.

The MJL writer also talks to an artist friend, who gives what I think is a very thought-provoking answer:

Tobi said it seemed clear to him that the root of the law was idolatry, and because he doesn’t see people worshiping idols or images anymore, and because we don’t know what God looks like, he doesn’t worry much about the issue of graven images. He doesn’t see any problem creating an image of a full human body. But, he said that he does see people obsessing over the price of artwork, and its monetary value, instead of over the artwork itself.

Your fish question is a bit more straightforward. Chabad.org offers a simple description: “The Torah gives two signs that determine if a fish is kosher — fins and scales. In order for a fish to be kosher, it must have both of these signs. According to the Talmud, any fish that has scales also has fins. Thus, if one knows that a particular fish has scales, it is considered a kosher fish.”

Hence, lox (brined salmon) and whitefish are hunky-dory, but lobster, shrimp and their many shell-y friends are not.