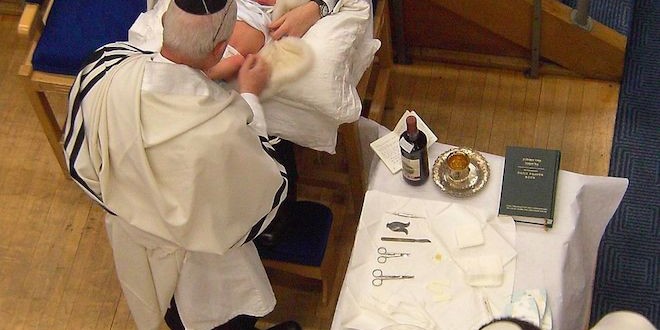 Preparing for a Jewish ritual circumcision with a Mogen shield (on the table, next to the scalpel) Photo by Cheskel Dovid

Ask A Jew: Do modern Jews still follow the practice of circumcision?

By Neal Schindler and Hyphen Parent

Do modern Jewish men still follow the ancient practice of circumcision and why?

Genesis 17:10-11 is pretty clear on the commandment to circumcise: “This is my covenant, which you shall keep, between me and you and your offspring after you: Every male among you shall be circumcised. You shall circumcise the flesh of your foreskins, and it shall be a sign of the covenant between me and you.” Genesis 17:14 goes one step further: “Any uncircumcised male who is not circumcised in the flesh of his foreskin shall be cut off from his people; he has broken my covenant.” Ouch! (Pun intended.)

Back when I was a wide-eyed, impressionable undergraduate student, I heard a non-Jewish friend describe circumcision as “genital mutilation.” That moment stayed with me. Years later, I had another non-Jewish friend who was passionately opposed to circumcision, as she considered it a human rights violation. Babies can’t give consent, so removing a baby’s foreskin with a knife seemed to her like something that simply shouldn’t be done, for any reason. Not a crazy perspective, from my point of view.

An endless debate rages online about whether circumcision confers health benefits. To those who steadfastly oppose circumcision as a brutal violation of a child’s rights, no health benefit could justify the barbarism. Why do so many modern Jews still circumcise? Likely because they see circumcision as a rite that ushers a baby boy into the start of his Jewish life. Baby girls get a naming ceremony instead; lucky them!

Full disclosure: I have seriously mixed feelings about circumcision, leaning against. A few years ago, the CDC reported that circumcision rates dropped in the U.S. during the ‘00s. One possible explanation: “In 1999, the American Academy of Pediatrics declared that there was not enough data to recommend the routine circumcision of baby boys. They reaffirmed their position in 2005.” A few years ago, some folks even tried to ban the practice in San Francisco. At the time, American Jewish Committee attorney Marc Stern called the attempted ban “the most direct assault on Jewish religious practice in the United States.”

Regarding the question of why, from a Jewish perspective, circumcision is important to God, Jewish author S.R. Hewitt wrote: “The plain fact of the matter is that we do not know. While numerous explanations for the ritual have been suggested by different sages throughout the generations, circumcision is a chok, a law that is performed as God’s decree, and according to traditional Judaism, no further explanation is needed.” There are Jews for whom such a non-explanation suffices. I happen not to be one of them.

The majority of Jews circumcise their sons at a ceremony called a bris when the baby is 8 days old.

Brit milah is seen as a symbol of the covenant between G-d and Abraham. Torah (Bereshit 17:10-12) tells us Abraham was commanded to circumcise all the men and that future generations should circumcise male infants at 8 days old.  The ceremony is more than simply a surgical procedure. It’s a religious ritual where the boy receives his Hebrew name and is welcomed into the covenant.
Jews today do not circumcise for any social or physical reason, but rather simply because it is commanded in the Torah.
Infant circumcision is common even among secular Jews, although they may opt to have the procedure done in a hospital, which does not fulfill the mitzvah.
A small number of Jews are rejecting circumcision for their sons. There are individuals and groups who fall into varying observance levels and all refuse to circumcise. Those numbers include some who are observant, not just secular Jews. Often, their arguments are not rejections or Judaism or Jewish tenants.  Some are rooted in the Torah and Jewish texts. While they are uncommon, there are welcoming ceremonies known as “brit shalom” (covenant of peace, which is sometimes also used to celebrate and name girl babies) or “brit b’lee milah” (covenant without cutting) for boys wherein they receive their Hebrew names and are celebrated, but are not circumcised.
Any child born to a Jewish woman is Jewish (Reform Judaism, recognizes patrilineal descent as well). A bris does not make a child Jewish. He is a Jew if the woman who carried him is Jewish. Although, a bris can be used to convert an infant not born to a Jewish woman. Adult males who convert traditionally undergo circumcision. If a male is already circumcised at time of conversion, he will traditionally have a drop of blood drawn by a mohel; a procedure known as a hatafat dam brit.

Previous The Bloody Trap of Faith and Politics
Next Mark Driscoll speaks: ‘There are lots of things I could say …’

“Jews today do not circumcise for any social or physical reason, but rather simply because it is commanded in the Torah.” Neal I imagine this line of reasoning is very problematic for you on a host of social issues related to Judiasm. This sounds very conservative evangelical like from my perspective.

I’m fascinated that circumcision is followed by most but the issues of homosexuality are easily thrown off. What is the Jewish hermeneutic for determining such acceptance or rejection of those types of texts?

How do Jewish people feel about female circumcision?

This isn’t a bait comment either, I’m serious about my curiosity.

Have you heard the saying: “Two Jews, three opinions”? It’s hard to say that Judaism has “easily thrown off” issues related to LGBT communities, whatever “easily thrown off” may mean. According to the Human Rights Campaign, “With1.4 million members, the Conservative Movement, of all the branches of Judaism, has the most mixed response to LGBT issues.” The Reform and Reconstructionist movements are generally extremely accepting, and Orthodox Judaism is generally the least accepting. It may be that the question of whether to embrace LGBT folks fully isn’t as big a deal in Judaism, but I don’t know that the faith tradition came to where it is easily. I think we just got there faster than some populous, high-profile branches of American Christianity, including the evangelical contingent, though that’s no monolith, either. (I just discovered an Evangelicals for Marriage Equality group on Facebook, to my delight.)

Circumcision strikes many Jews, I guess, as something not to be questioned. I try to question as much as possible. If my values don’t align with something I’m commanded to do, well, “just following orders” isn’t really Judaism’s style anyway, most of the time. Or shouldn’t be, I think.

I bet every Jew you ask thinks female “circumcision” is a human rights violation. Because, ahem, it is.

And I know that mastery of baiting isn’t something you aspire to, Eric. 🙂

Anecdotally, only about 40% of Jewish boys in Europe are circumcised. Rabbi Binyomin Jacobs, president of the Dutch Association of Rabbis, said only about 50 male Jewish babies are circumcised in the Netherlands each year.
– “Dutch doctors urge end to circumcision” Ynet.news, September 27, 2011
Today the Dutch Jewish population numbers about 30,000…
– Jewish webindex
Netherlands birth rate: 10.23 births/1,000 population (2011 est.)
– Index Mundi
If the Jewish birth rate is the same as the national average, 307 Jewish children are born annually, 157 of them boys, so the circumcision rate is less than 32%

Here are contact details for more than 200 celebrants of non-surgical Brit Shalom, 130 of them rabbis.http://tinyurl.com/britshalom

I am one of those European Jews who has not and will not continue the tradition for human rights reasons as well as reasons outlined by Moses Maimonides about the loss of potential pleasure for both partners – yes, even in the Middle Ages it was known to affect feeling; denial is truly a modern phenomenon. My father knows I’m not happy I was cut and neither myself nor my brother will cut our kids. This is not a rejection of our heritage; it’s purely for human rights reasons.

Enjoyed every bit of your blog.Really looking forward to read more. Great.