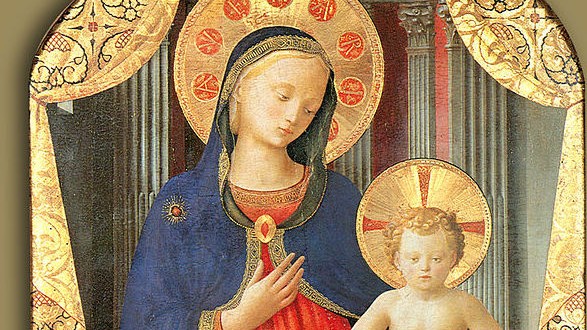 Ask A Catholic: Why do Catholics worship Mary?

Why do Catholics worship Mary?

Instead, we Catholics give Mary high honor and reverence due to her place in salvation history as, literally, the Mother of God. In addition to that (and what likely comes across as worship to non-Catholics without a proper understanding of the practice), we also ask Mary for prayers — to intercede for us, much like we would ask a friend here on earth to pray for us.

One great analogy used often to explain Mary’s role and why we ask her for prayers, and one which I particularly like, is to think of Mary as the moon. The moon doesn’t produce any of its own light — it merely reflects the light of the sun. So too does Mary reflect the light of her divine son.

Mary, by virtue of her giving birth to Jesus, nursing Jesus, and raising him into adulthood, knew her son better than anyone on earth. Because we, as Catholics, believe that the Body of Christ goes beyond this world and that we are still connected to those who have died, we ask Mary and the rest of the saints for their prayers and guidance on our own path to sanctity.

Many rebut this practice by saying, “Why do I need to go through anyone else to get to Jesus when I could go straight to him?”

It’s a good question, and technically, you don’t need to ask for anyone’s help but the Lord’s. However, the fact that we, as humans, aren’t islands floating separate from one another in this life, and considering that God used humans as ministers of his divine grace throughout Scripture leads us to believe that he also intends us to rely upon one another for help in achieving holiness.

The double-reliance on God and others is, in fact, demonstrated well in the Sign of the Cross (the action made by Catholics to begin and end prayers). In addition to saying, “In the name of the Father, Son, and Holy Spirit,” the very action of moving the hand from head (Father) to chest (Son), then from left shoulder to right shoulder (Holy Spirit) is an illustrative prayer when rightly considered. The vertical motion signifies our relationship to the creator, while the horizontal motion signifies the connection we have with our brothers and sisters in Christ.

At every Mass, the priest recites as part of the Eucharistic Prayer that we receive Jesus so as to become “One body, one spirit in Christ.” That Body of Christ, far from being limited to earth, extends to heaven and contains all those who have gone before us. We’re all connected to one another and can, just as we speak to our friends, speak to those in heaven.

Mary plays a special role in this — one unlike anyone else in human history — given her closeness to Jesus as the person who brought him into the world and whose DNA coursed through Jesus’ veins.

Mary is literally the best example of the Christian life we have. As the Catechism of the Catholic Church reads:

“By her complete adherence to the Father’s will, to his Son’s redemptive work, and to every prompting of the Holy Spirit, the Virgin Mary is the Church’s model of faith and charity. Thus she is a ‘preeminent and . . . wholly unique member of the Church’” (967)

Mary, like all humans, is still nothing on her own merits and receives all of the grace she possesses from God the Father. Catholics don’t believe in the “Holy Quadrinity” — that being, the Father, Son, Holy Spirit, and Mary. Mary was, and still remains, a human being, but God chose her specifically to guide the faithful to her Divine Son through her special relationship to Jesus.

Finally, we honor Mary because of her unique motherhood to all of us. Just before Jesus died, he spoke to both his mother and St. John, the beloved disciple:

With St. John, the beloved disciple, being known in salvation history as the interpreter of Christ’s words, and thereby representing the Church, Jesus does two things: He entrusts Mary to love and care for John (and vice versa), and in so doing tasks His mother with the care of His Church.

In short, all the saints in heaven, Mary most of all, hear our prayers and intercede for us to God. After all, they’re much closer to Him than we are!