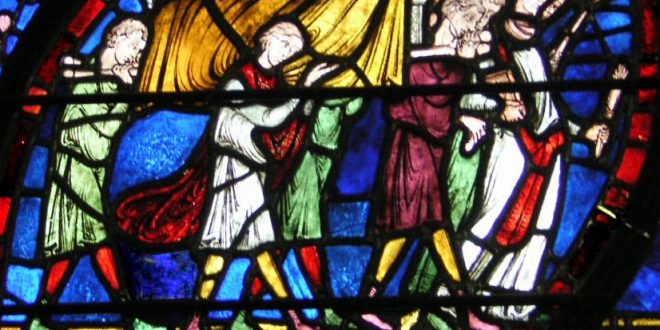 Funeral procession from the "Healing Window" at Canterbury Cathedral/Wikipedia

Ask A Catholic: Who can give the eulogy at a Catholic funeral?

During a Catholic funeral who can give the eulogy? Does it have to be the priest, or can it be a family member?

In recent memory the most publicized Catholic funeral was that of Chief Justice Antonin Scalia, which was celebrated by his son the Rev. Paul Scalia. As both priest and family member, his words give a wonderful context from which to answer the question concerning eulogies at Catholic funerals. He says:

We are gathered here because of one man. A man known personally to many of us, known only by reputation to even more. A man loved by many, scorned by others. A man known for great controversy, and for great compassion. That man, of course, is Jesus of Nazareth.

Fr. Paul certainly introduced  his homily in such a manner as to begin people thinking about his dad, Justice Scalia; however, in this beautiful and somewhat jarring turn, Fr. Paul highlights what makes Catholic funerals different from many other types of funerals: the Catholic funeral is Christo-centric. Of course to put Christ at the center is not to exclude either the deceased or those gathering in morning, but rather to highlight He Who Is Our Hope. For it is only in and through a relationship with Christ, who conquered death, that we have any hope the death will not conquer us, or our loved one.

The Catholic funeral itself highlights the relationship the deceased had with Christ: at the beginning of the Mass, the white pall is placed over the body and the priest says, “In Baptism, Antonin died with Christ may he now rise with him to eternal life,” and similar statement are made at placing of the crucifix and Book of the Gospels, thus demonstrating the relationship between the deceased and Christ.

Further, Catholic funerals are unique in that they recognize that though the deceased was united to Christ, like all of us that unity was imperfect. Again, let us look at Fr. Paul’s homily:

We thank God for his goodness to dad as is right and just. But we also know that although dad believed, he did so imperfectly, like the rest of us. He tried to love God and neighbor, but like the rest of us did so imperfectly. He was a practicing Catholic, “practicing” in the sense that he hadn’t perfected it yet. Or rather, Christ was not yet perfected in him. And only those in whom Christ is brought to perfection can enter heaven. We are here, then, to lend, our prayers to that perfecting, to that final work of God’s grace, in freeing dad from every encumbrance of sin.

Fr. Paul, rather than simply Eu-logizing (speaking good words about) his father, rather allows his father’s imperfection to shine through. In doing so, Fr. Paul helps others recognize the important work that is to be done at the funeral: praying for the soul the deceased, that he might be perfected and welcomed into heaven.

Hopefully, this will give enough context to now actually answer the question about who is to give the eulogy. The priest is always to give a homily; this homily, different than a eulogy, is called to invite people into the mystery of Christ’s salvific work, and guide them to pray for the deceased that he might be united perfectly to Christ.

At the end of the funeral, it is possible for someone close to the deceased to speak on behalf of the dead. This, though, is different from a eulogy, as eulogies are explicitly forbidden in the Catholic funeral. So what, then, is this address, if not a eulogy? Everyone, to one degree or another, is given a voice at the funeral, even if that is one voice joined to others in our responses, all save the deceased. To speak then on behalf of the deceased is to give a voice to the dead. What would he say to us if he were able to speak now, remembering, of course, the broader context of his purification. Were I to have someone speak on my behalf at my funeral, I can think of three areas that I would want covered: 1. I love you all, 2. I’m sorry for the ways that I have failed to love you, and 3. Please pray for me that my failures may be purified and that I might be welcomed into heaven.

In all of this then, one might be asking: What about remembering the life of the person? Certainly, remember the person’s life. Tell stories about him about the good times, the bad times, the funny times, the sad times. Cry and laugh and cry some more. But do so in the place best suited, in a less formal environment where one need not be embarrassed to get choked up while speaking. That is to say, receptions and wakes are among the best places for such reminiscing, such good-words, such eulogies.

The Rev. Curtis Seidel is one of many Montanan immigrants to Washington State, who initially moved to Spokane for the purpose of studying at Gonzaga University. During that time he fell in love with this beautiful land of Eastern Washington and the people who live there. After completing an undergraduate degree in philosophy and classics he was sent on a harrowing four year journey to the wild land of Washington D.C. There, in our nation’s capital, he braved many dangers and met many wonderful friends in order to complete a graduate degree in theology. Since then, he has returned to home and is currently serving as a priest at Our Lady of Lourdes Cathedral, the Mother Church of the Diocese of Spokane. Online he can be found at spocatholic.wordpress.com and on twitter @Fr_Seidel.