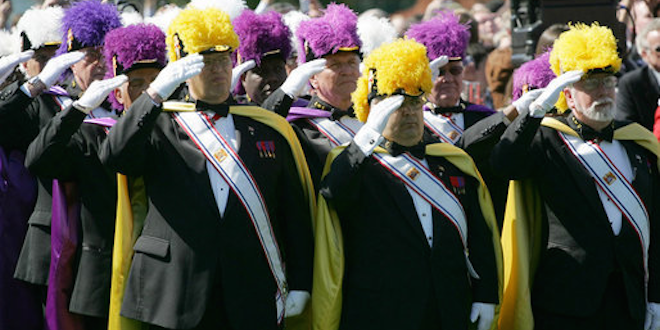 Members of the Knights of Columbus salute during the welcoming ceremony for Pope Benedict XVI, Wednesday, April 16, 2008, on the South Lawn of the White House. Wikipedia photo by Shealah Craighead

Ask A Catholic: Who are the Knights of Columbus?

What’s your question about the Catholic faith? Submt it an
onymously here or leave it in the box below.

Who exactly are the Knights of Columbus and what do they do?

The Knights of Columbus are a Catholic men’s fraternal service organization, originally founded in 1881 by a young priest named the Rev. Michael McGivney, and is the largest of its kind in the world.

The late 19th Century was marked by the creation of many fraternal organizations, but high hostility toward Catholic immigrants and dangerous work environments leaving many families without fathers led McGivney to create a specifically Catholic organization providing support for those afflicted.

McGivney proposed a lay organization that would serve multiple purposes: to provide for families of deceased members, to give men an alternative option to other societies antithetical to Church teaching, and to unite men of Catholic faith. The Knights of Columbus website gives the reasoning for its name:

“As a symbol that allegiance to their country did not conflict with allegiance to their faith, the organization’s members took as their patron Christopher Columbus — recognized as a Catholic and celebrated as the discoverer of America. Thanks to Father McGivney’s persistence, the Knights of Columbus elected officers in February 1882 and officially assumed corporate status on March 29.”

The organization itself is divided into councils on the national, state, district, and local levels. All councils are overseen by the Supreme Council of the Knights of Columbus, located in New Haven, Conn.

Knights are typically drawn to membership because of an emphasis on serving the Church — typically in their parish, but sometimes on a larger scale — and serving their community, and, most of all, serving their family.

Most commonly, you’ll see Knights of Columbus serving meals at parish functions (pancake breakfast, anyone?), performing various duties around the parish and at Mass, putting on programs in the community, or providing an Honor Guard at special Masses, like priestly ordinations or bishop installations.

For more information on the Knights of Columbus, visit its website at KofC.org.

Previous Poem: Taste and See the Goodness of the Lord
Next MAP: Information on nearby wildfires