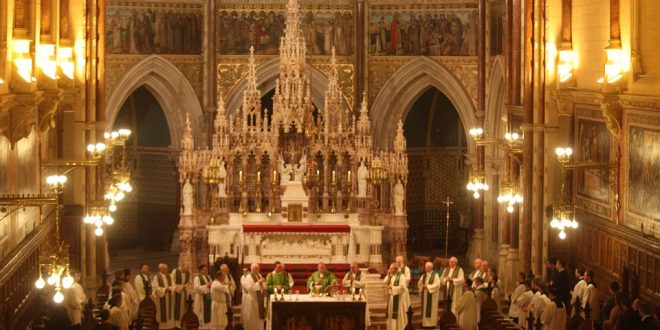 Ask A Catholic: Mass is boring

I want to go to Mass, but I feel like it’s really boring. What should I do?

An important and a common question, to be sure.

I’d first offer that many of life’s most essential duties are boring — changing the oil in your car, going to the dentist, cleaning the house — and yet, our lives wouldn’t function to their fullest without such things. So, too is the practice of Catholics going to Mass.

Having once wondered this myself, I only overcame that wonder when I realized something very important: The Mass is not about me. I am not there to be entertained, but instead to be in communion with Jesus Christ, my Savior and Redeemer. Even in spite of bad preaching, bad music, or crabby church ladies, the sole purpose is to receive the Lord in two ways: In the reading of Scripture, and in the reception of the Holy Eucharist.

Though attending Mass might seem like just another place for humans to gather, in reality it is unlike anything else in this world. It’s a place where we can be still and let God enter us, so many times a sense of boredom can be overcome simply by a change in the disposition of our minds — instead of, “What can I get out of this?” we might instead think, “What is God trying to tell me here?”

Similar to how a hospital treats the sick and wounded, so too does the Lord seek to heal us in places like Mass. Many times, all it takes is for us to attend, to mentally empty ourselves of our own cares, and recognizing our own woundedness ask God, “Will you heal me?”

In a world where there is so much noise, so much bewilderment, there is a need for silent adoration of Jesus concealed in the Host. Be assiduous in the prayer of adoration and teach it to the faithful. It is a source of comfort and light, particularly to those who are suffering.

Even beyond that, because the Mass is understood as a representation of Christ’s sacrifice on the cross — a “re-presentation” as opposed to a mere symbol — we aren’t alone as we sit in the church watching the priest celebrate the sacred liturgy. Instead, we’re mystically joined by the entire company of angels and saints, and together we worship God.

For a little extra information, I’d encourage readers to check out a video answering the same question by Bishop Robert Barron.

And so, the next time at Mass, I’d gently encourage anyone who has had “boring” experiences of it to perhaps look at it with fresh eyes, asking the Lord to fill your heart and more fully encounter Him there. What is there to lose?