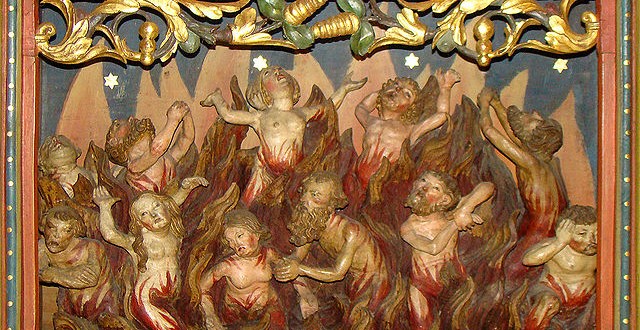 Image of souls being purified by flames in purgatory. Wikipedia photo by Peter Schmelzle

Ask A Catholic: Is There Really a Purgatory?

Is there really a Purgatory? I went to Catholic schools, grade and high school and was taught that there was. But in my years lately I feel Purgatory is here on earth. I was told by a Jesuit priest that it isn’t in the Bible so what am I to believe now? Someone suggested to read a few different books of which I purchased one at a bookstore here in town called “Souls in Purgatory.” Also some other ones. Can you give me some good advice of what I should believe?

This is a good question, since Purgatory tends can be a confusing and potentially controversial topic.

First, there really is a Purgatory.

Second, references to purgatory and its purpose do indeed appear in Scripture.

While some references don’t appear in the Bibles used by the vast majority of Protestant denominations, the plainest examples do appear in everyone’s Bibles. (See my piece on the difference between Catholic and Protestant Bibles here — more on the Scripture reference in a moment.)

Purgatory, as defined by the Catholic Church, is not a “third” eternal dwelling place along with heaven or hell, insofar as it’s an alternative option for where a person may spend eternity. Instead, Purgatory, from the same root as to purge or to purify, is a place of purification in preparation for heaven.

Here’s what the Catechism of the Catholic Church says about Purgatory:

“All who die in God’s grace, but still imperfectly purified, are indeed assured of their eternal salvation; but after death they undergo purification, so as to achieve the holiness necessary to enter the joy of heaven (1030).”

So basically, if you make it to Purgatory, your soul is destined for heaven. But it just needs a bit of cleaning up first.

Though the original reference to Purgatory comes from 2 Maccabees 12:39-46, in which Judas Maccabeus and his men pray for the souls of their deceased comrades, perhaps the clearest Scriptural reference comes from none other than St. Paul in his first letter to the Corinthians:

“For no other foundation can any one lay than that which is laid, which is Jesus Christ. Now if any one builds on the foundation with gold, silver, precious stones, wood, hay, stubble—each man’s work will become manifest; for the Day will disclose it, because it will be revealed with fire, and the fire will test what sort of work each one has done. If the work which any man has built on the foundation survives, he will receive a reward. If any man’s work is burned up, he will suffer loss, though he himself will be saved, but only as through fire.” (3:11-15; emphasis added)

The image of fire, not as consuming but instead as cleansing, is St. Paul’s metaphor of choice for describing the purification — the purgation — we receive when we die in God’s grace but our souls aren’t yet as squeaky clean as they need to be. This perfection is affirmed in Revelation 21:27: “But nothing unclean shall enter [heaven].”

And so, Purgatory not only exists, but it is a necessity if we believe that there are varying levels and severities of sin. If we die with a small amount of sin (venial) on our hearts, but we still die in God’s friendship, what happens to that sin?

With only two possible places to go, as most Protestants have come to believe, we would necessarily be sent to hell for even the smallest shred of sin on our hearts at death, precisely because nothing stained may enter heaven.

The alternative — that God might cleanse our souls of that sin before allowing us entry into heaven — is only possible with the existence of a “stop along the way” — also known as Purgatory.