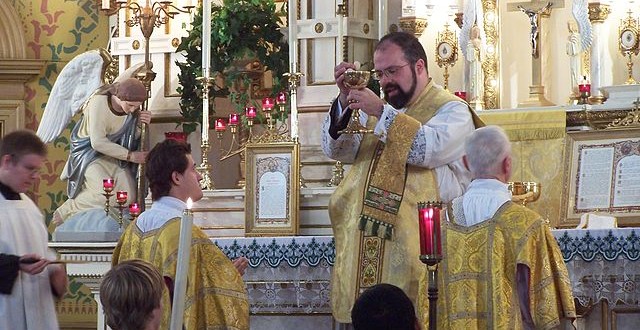 Ask A Catholic: Is It Forbidden for Non-Catholics to Receive the Eucharist?

I attended a retreat at a Benedictine monastery and they allowed non-catholics to celebrate the Eucharist. I thought that was forbidden. What are your thoughts?

The Eucharist, for those unfamiliar with the term, is what Catholics celebrate at each Mass as the real Body and Blood of Jesus under the “accidents” of bread and wine. In the same way Jesus presented, before the 12 Apostles, the bread and wine transformed into his body and blood at the Last Supper, a priest speaks the same words and offers a re-presentation (not representation) of Jesus’ sacrifice on the night before he died.

People who have been received into the Catholic Church and been given their First Communion come forward at each Mass and receive the Eucharist, responding “amen” after having received it. This one-word assent, as it turns out, holds a lot of weight, spiritually speaking, and tells a lot about the reason non-Catholics are asked not to partake in the Eucharist.

A common misconception among non-Catholics (and many Catholics) is that not allowing non-Catholics to receive is showing a lack of hospitality. However, the truth is, in fact, the opposite — asking non-Catholics to refrain from taking the Eucharist is instead the true hospitable act, because each time a person receives the Eucharist, they, by their very action in receiving, are assenting to all the Catholic Church teaches, most especially that Christ is really and truly present, Body, Blood, Soul and Divinity, in the Eucharist. When we say “amen,” or “I believe,” that’s what we are saying yes to. We’re giving verbal assent to our physical “yes” in receiving.

For proof that the Eucharist is more than just hospitality, we turn to St. Paul in his first letter to the Corinthians:

Whoever eats the bread or drinks the cup of the Lord unworthily will have to answer for the body and blood of the Lord. A person should examine himself, and so eat the bread and drink the cup. For anyone who eats and drinks without discerning the body, eats and drinks judgment on himself. That is why many among you are ill and infirm, and a considerable number are dying. If we discerned ourselves, we would not be under judgment, but since we are judged by [the] Lord, we are being disciplined so that we may not be condemned along with the world. (1 Cor. 11: 27-32; emphasis added)

The reality of the present state of Christianity is that it sits in a profound state of division, with many thousands of differing belief systems and many beliefs within them that are different and in stark disagreement with that which the Catholic Church proclaims to be true. This is the primary reason for reserving the Eucharist to Catholics (and, in very specific circumstances, non-Catholic Christians).

Witnessing to the Eucharist by treating it as the most serious aspect of Christian faith is, in my experience, becoming exceedingly foreign to our American sensibilities. John Paul II, in his 2003 encyclical Ecclesia de Eucharista spoke profoundly on this very point:

“At times one encounters an extremely reductive understanding of the Eucharistic mystery. Stripped of its sacrificial meaning, it is celebrated as if it were simply a fraternal banquet. Furthermore, the necessity of the ministerial priesthood, grounded in apostolic succession, is at times obscured and the sacramental nature of the Eucharist is reduced to its mere effectiveness as a form of proclamation. This has led here and there to ecumenical initiatives which, albeit well-intentioned, indulge in Eucharistic practices contrary to the discipline by which the Church expresses her faith. How can we not express profound grief at all this? The Eucharist is too great a gift to tolerate ambiguity and depreciation.” (10; emphasis added)

To answer the question more fully, the Eucharist is reserved for Catholics, but only those who have “discerned the body” and prepared their soul to receive the fruit of Christ’s great sacrifice. It should never be considered an act of hospitality to extend the Eucharist to non-Catholics, because it was never intended to be treated as such. The receiving of the Eucharist by faithful Catholics was intended to be (by Jesus), and continues to exist as the ultimate sign of faith in all that the Catholic Church believes and teaches.

In light of that, it’s disappointing that the retreat masters at the Benedictine monastery, the nuns and/or priests entrusted with being faithful witnesses of the fullness of Catholic teaching, misled non-Catholic retreatants into believing that an invitation to receive the Eucharist was a sign of hospitality. They should have known better, and by not “discerning the body,” as St. Paul wrote, they disregarded the Gift Christ gave to the world and disregarded the spiritual well being of any non-Catholics they encouraged to come forward to receive it.

This statement expresses perfectly what I have felt from Catholicism:

“How can we not express profound grief at all this? The Eucharist is too great a gift to tolerate ambiguity and depreciation.” -John Paul II

When we asked why St. Gertrude’s allow it, one nun said: “Jesus would never turn someone away.”

Christ offered himself to me as a gift of grace, He is not depreciated by me receiving Him as gift and grace. But, that’s my Protestantism rearing up in protest. 🙂

Thanks for helping me see that the act of those rebel nuns/priest that I experienced was a radical act of welcome and hospitality. It makes me appreciate the grace it gave, even more.

Eric, thanks for your thoughtful response 🙂

“Each time a person receives the Eucharist, they, by their very action in receiving, are assenting to all the Catholic Church teaches”

This along, with the line from JPII prior to the one you quoted — “[A reductive Eucharistic understanding] has led here and there to ecumenical initiatives which, albeit well-intentioned, indulge in Eucharistic practices contrary to the discipline by which the Church expresses her faith” — are the central points of the answer to this question, if I were to boil it down.

First, the Church isn’t turning anyone away from joining with them in prayer, to coming to Mass, to praying the Rosary, making the sign of the Cross, you name it. So, to allow reception of the Eucharist “because Jesus would never turn someone away” is to assume that offering the Eucharist is the only way to come to the Lord, and is, in my opinion, a grandiose cop-out.

I think the nuns just don’t want to tell people, “no”. I’m sure they’re wonderful people, provide a great place for a retreat, and many other things; those are all commendable things of themselves. However, indicating that they know better than the Church they claim to serve may just amount to making Jesus throw up a-la Revelation 3:15-16: “So, because you are lukewarm, neither hot nor cold, I will [vomit] you out of my mouth.”

There’s a saying (I’m not sure who to attribute it to) that “Though we are bound by the sacraments, God is not bound by them,” meaning simply that God’s grace works in ways we aren’t privy to. Christ offered himself to everyone as a gift of grace, you’re totally right, but that grace doesn’t always take the same form.

Protestants ARE welcome in the sanctuary of a Catholic Church. They ARE welcome to join in prayer with Catholics. And you’re even able to receive the Eucharist faithfully, BUT if *and only if* you’re willing to say to the Lord in your heart, “Lord, I believe in what you have revealed through the ‘one, holy, catholic, and apostolic’ Roman Catholic Church and nothing else. If I don’t, and if I receive you unworthily, strike me dead.”

True radical hospitality would have been giving a thorough catechesis on what the Eucharist truly is, and why it’s reserved for only Catholics in good standing. They should have explained to everyone that the Eucharist is the ultimate sign of faith in the Catholic Church, and to present it as a sign of welcoming is to misunderstand it greatly.

I must agree with Eric, and go further: while it is not an act of hospitality to offer the bread and cup to all, it is an act of inhospitality to withhold it. The quote from Paul seems to leave the decision of who is worthy, or ready to receive the elements up to the individual. He does not say priests or leaders or the organization (the church was not present at that time) but “you”, signifying that the person or people he was addressing were to decide for themselves. Thus, I hold, it is not the intention of the early Christians that it be withheld from any righteous seeker. If it is being offered to people, and I feel good in my soul, I’ll take it. It’s not for another to decide my internal state, which is in a discussion with God, not some social institution.

Ask a Catholic: Are Non-Catholics Allowed to Receive the Eucharist? | Mountain Catholic

[…] This column is hosted by and has been updated from it’s original at Spokane Faith & Values. It has graciously been given permission for reposting at […]