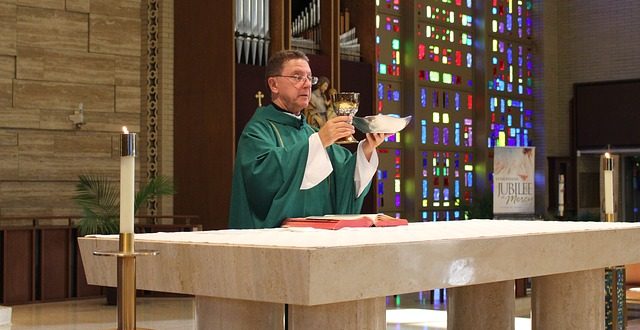 I’ve never been to Mass before, but would like to go. But I don’t know what to do. What are the rules when I get there?

Fear not! Catholic Mass can seem daunting to someone who rarely attends, or who may be setting foot in a Catholic Church for the first time. But believe me when I say this — there is nothing to be afraid of. Granted, there are probably crabby old ladies and crying children at every parish in the world, saint statues may be an odd features you’re not used to, or the abominable “wreck-ovations” of the 1970s may be off-putting, but even these are no reason to be nervous. Mass is a place you’re always welcome, no matter what, no matter where.

The first thing you should do is scope out the parish you’d like to attend. Asking a Catholic acquaintance or simply doing a quick Google search based on your location will do the trick, and most parishes will have a website listing their weekend (and weekday) Mass times. The Catholic Diocese of Spokane, in fact, has a really handy “parish finder” at its website here.

Next, you’ll want to do a little homework (I promise, it’s not much!) in preparation. Catholic Mass can seem a bit like an Olympic event, what with all of our standing and sitting and memorized responses. Thankfully, there are some free resources available online that can help. For a rundown of the responses you’ll hear people saying at Mass — even if you don’t want to recite them yourself just yet — check out this printable PDF from CatholicTV here and bring it with you.

Every Mass also has readings from Scripture — typically one each from the Old and New Testaments, a Psalm, and a Gospel reading on weekends — that are universal no matter which parish you attend in the world. You’re able to easily find the day’s readings from the United States Bishops’ website here (and you can even get them in a daily email!).

When Sunday (or the day you pick to attend Mass) rolls around, try to arrive between 5-10 minutes before the liturgy is scheduled to start. When you first walk in, you may see people dipping their hand in a dish of Holy Water and making the Sign of the Cross — if you’re not Catholic, don’t feel obligated to do so.

Some parishes, like the Cathedral of Our Lady of Lourdes in downtown Spokane, will have ushers handing out bulletins that contain the day’s music selection, in addition to information about the parish. Feel free to grab a bulletin on your way in, otherwise you’ll likely be able to find the day’s music in little books (called “Missalettes”) at your seat.

Next, scope out a good spot to sit. You may see others “genuflecting” — dropping to one knee and again making the Sign of the Cross — but, again, don’t feel obligated to do so if you aren’t Catholic. Once seated, say a little prayer if you like, and wait for Mass to begin.

Refer to the printable Mass card for your responses, and/or the missalette, while Mass is in progress. Also, you’ll want to pay special attention to the words spoken by the priest, and especially the interplay between the priest and the people — these words you’ll hear spoken hearken back to the very time of Christ himself, and you’ll be participating in a liturgy that’s been celebrated for literally 20 centuries.

After what’s called the “Liturgy of the Eucharist,” in which the priest prays over bread and wine and where, as Catholics profess, those elements transform substantially into the Body and Blood of Jesus Christ, you’ll see the congregation processing forward. It’s here that Catholics receive the Eucharist, and where non-Catholics are encouraged to come forward and receive a blessing. If you do decide to process forward, simply cross your arms in front of your chest (a hand on each shoulder, basically) and the priest or deacon will give you a blessing.

Sidenote: It’s very important to understand that not distributing Communion to non-Catholic brothers and sisters is not, as some may think, an act of inhospitality. The Eucharist is reserved for those who have become part the Catholic Church and who profess belief in all that the Church teaches and holds to be true. Find more on that here.

At the end of Mass, the priest will likely be waiting to greet attendees at the front doors of the Church. Feel free to approach him and share that it’s your first time attending Mass — having guests and visitors is always a source of great joy in the Church, and your presence will be no different!

If you feel so inclined, most parishes will have resources — brochures, books, CDs — available near the front doors for those seeking more information. Otherwise, it’s easy to find great (and often free) resources online or in your local Catholic bookstore.

If you like what you see, don’t be afraid to make a habit of coming back. But be careful…you might just end up Catholic!

For a handy list of online resources, my friends and I have compiled some of our favorites here. If you’d like more help, please leave a comment on the post below or shoot me an email at mtncatholic@gmail.com.