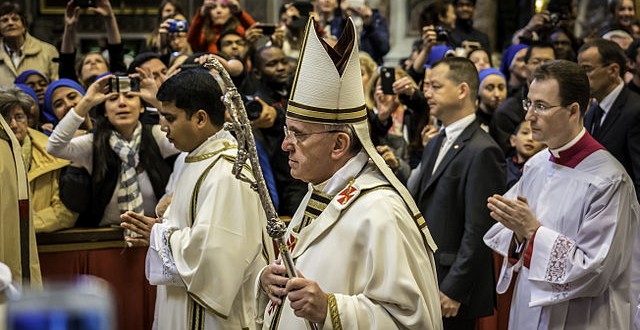 Ask A Catholic: How is the pope infallible?

Catholics believe the pope is infallible right? Can you explain what that means, exactly?

You’re correct, however, the Catholic Church’s teaching on papal infallibility is one that’s very commonly misunderstood. Very often, what the Church means by “infallibility” is confused with “impeccability.” Someone may think it means either the pope himself cannot sin or that in any of his decisions he cannot make a mistake. Instead, the charism of infallibility only applies to certain situations and isn’t just a blanket ability claimed by the Church on behalf of the pope.

To clarify, the doctrine of infallibility isn’t contradictory to the pope being capable of sinning or giving a bad example, or even of disagreeing with one of his predecessors on matters of discipline or on unofficial pronouncements on faith and morals.

Specifically, the pope’s charism of infallibility applies only to official and solemn pronouncements of faith and morals. In order for the pope to speak infallibly, certain criteria must be met, namely, that he speak ex Cathedra — literally “from the chair” of St. Peter — and that he is defining a doctrine specifically regarding faith or morals.

The Church officially defined the dogma of papal infallibility at the First Vatican Council in the document Pastor Aeternus in 1870:

The Roman Pontiff, when he speaks ex Cathedra, that is, when in discharge of the office of Pastor and Teacher of all Christians, by virtue of his supreme Apostolic authority, he defines a doctrine regarding faith or morals to be held by the Universal Church, by the divine assistance promised to him in blessed Peter, is possessed of that infallibility with which the divine Redeemer willed that His Church should be endowed for defining doctrine regarding faith or morals: and that therefore such definitions of the Roman Pontiff are irreformable of themselves, and not from the consent of the Church. (Chapter 4; emphasis added)

The Catholic Encyclopedia goes on to further clarify that the pope, when desiring to teach infallibly, make clear that he “wishes to determine some point of doctrine in an absolutely final and irrevocable way, or to define it in the technical sense,” and also must make it completely clear that he “intends to bind the whole Church.”

In other words, an infallible declaration, when all of those criteria are met, adds to what is required of Catholics to believe if they wish to stay in full communion with the Church and avoid suffering a “shipwreck in their faith,” as Pope Pius IX once put it.

Interestingly enough, infallible statements themselves are often very short. A good example of this is the infallible pronouncement of Pius IX in defining the dogma of the Immaculate Conception of the Blessed Virgin:

“We declare, pronounce, and define that the doctrine which holds that the most Blessed Virgin Mary, in the first instance of her conception, by a singular grace and privilege granted by Almighty God, in view of the merits of Jesus Christ, the Savior of the human race, was preserved free from all stain of original sin, is a doctrine revealed by God and therefore to be believed firmly and constantly by all the faithful.” (Ineffabilis Deus, 1854)

However, though this is only a few lines, it’s housed in a much larger document, which provides context and detailed explanation for the faithful. This document in particular can be found here.

For evidence of the charism of papal infallibility in Sacred Scripture, we turn first to Matthew 16:18-19 when Jesus says to St. Peter:

Many fail to realize that “Peter,” or petra in Greek, meaning “a mass of rock,” was up to that point not a word typically used as a name. I once heard a priest describe it like this, “It’s like if I said to you, ‘I say to you, you are Chair, and on you I will sit.’”

In light of this, there is a greater significance here than just a renaming of one of the 12 Apostles. In the crowning of Peter, Jesus not only created a visible church on earth, one which could never be prevailed against by the netherworld, but he installed also a visible leader of that church to act, as we still reference the pope, as the “Vicar of Christ” who also would be protected from teaching error in a special way.

The appointment of Peter and creation of a visible church on earth was specially protected by the power of Christ as we see in Luke 22:32 (“I have prayed that your own faith may not fail”) and in John 16:13 (“I have much more to tell you, but you cannot bear it now. But when he comes, the Spirit of truth, he will guide you to all truth.”)

For additional reading, check out the Catholic Encyclopedia’s much longer, more descriptive explanation of infallibility here.

Previous You wouldn’t let me be the hero
Next What is compassion?