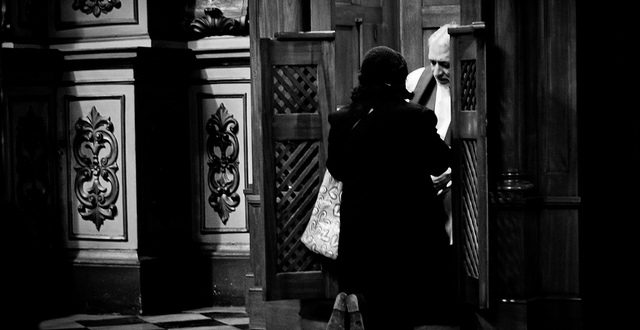 Flickr photo of priest at confessional by Hernán Piñera

Q: Can you explain how penance works?

Imagine two brothers playing ball in their front yard, just a little too close to the house. One winds up a pitch and the other swings mightily, sending the ball veering toward the house and through their living room window. Mortified, they rush inside to survey the damage.

When the boys walk in the front door, there’s dad standing over the ball and shards of broken glass.

“I forgive you, son,” dad replies, as a tender smile breaks across his face. Dad turns slightly more serious: “But let’s talk about how to get this fixed. How does it sound to take the proceeds from your next five lawn jobs to pay for the window?”

Even though, in this analogy, the father is fully capable of paying for the broken window, he still asks his son to pay to repair the window. The father’s forgiveness isn’t contingent upon whether or not the son pays to fix the window– instead, the father offers the son a way to “make reparation” after being forgiven. The father knows that having him offer something valuable, his time and money, will (hopefully) stir up in his son a desire to take better care when playing baseball the next time around. The external sacrifice, in essence, is meant to convert the person internally.

Penance, particularly as the Catholic Church understands it, is an act of consciously repenting of the wrongs that one has done. Like all forms of prayer, as St. Therese of Lisieux says, it’s a “surge of the heart; it is a simple look turned toward heaven, it is a cry of recognition and of love, embracing both trial and joy.”

The form this takes in Catholicism is to first go and confess one’s sins to the priest– the priest acting in persona Christi, taking the direction of Jesus from Matthew 18:18 to forgive sins on His behalf. The priest, after absolving the penitent of his or her sins, then recommends a penance, typically a series of prayers or a concrete act of reparation if another person was hurt, in order to help the person galvanize their repentance.

To close, I want to let the three segments on penance from the Catechism of the Catholic Church speak for themselves:

(1430) Jesus’ call to conversion and penance, like that of the prophets before him, does not aim first at outward works, “sackcloth and ashes,” fasting and mortification, but at the conversion of the heart, interior conversion. Without this, such penances remain sterile and false; however, interior conversion urges expression in visible signs, gestures and works of penance.

(1431) Interior repentance is a radical reorientation of our whole life, a return, a conversion to God with all our heart, an end of sin, a turning away from evil, with repugnance toward the evil actions we have committed. At the same time it entails the desire and resolution to change one’s life, with hope in God’s mercy and trust in the help of his grace. This conversion of heart is accompanied by a salutary pain and sadness which the Fathers called animi cruciatus (affliction of spirit) and compunctio cordis (repentance of heart).

(1432) The human heart is heavy and hardened. God must give man a new heart. Conversion is first of all a work of the grace of God who makes our hearts return to him: “Restore us to thyself, O LORD, that we may be restored!” (Lam 5:21) God gives us the strength to begin anew. It is in discovering the greatness of God’s love that our heart is shaken by the horror and weight of sin and begins to fear offending God by sin and being separated from him. The human heart is converted by looking upon him whom our sins have pierced.