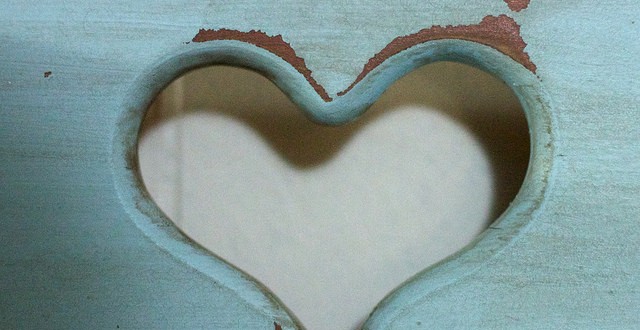 Ask A Buddhist: Where does love fit into Buddhism?

I have always wondered how “heart” fits into, or is addressed by Buddhists. I can’t shake the notion that the practice of Buddhism seems “heady” to me; sort of lacks a heart connection to others. I have studied Buddhism a little bit and I am attracted to it, but I keep coming away with the feeling that it is not a good fit because it seems overly intellectual.  What am I missing?

First off, the caveat that should begin all my AAB responses: know that my slice of perspective is necessarily narrow. I’m a white, middle-class, happily-married, Spokane mother of two who grew up with no knowledge Buddhist teachings or cultures in a WASP (white-anglo-saxon-protestant-middle-class) suburb of New York City. I studied comparative religions in college, and was a religious “tourist” for a time before committing to a Buddhist path for the last three decades in the Southeast Asian Theravada tradition. Most importantly, I’m not liberated, not even close. However, I’m fascinated that we Buddhists find ourselves in the midst of a quickly evolving global religion, a cross-pollination of the ancient East and the modern West, the modern East and the ancient West. As someone with a love of the Buddha’s teachings, over- blessed with curiosity, I’m willing to ask those who are more experienced, committed and smarter than myself to help me wrestle with the issues raised by readers.

Now on to Buddhist love. I’ve struggled with this same issue, so I’m really glad you asked. It’s a great question and, in my mind, key in terms of how one matures as a Buddhist (and as a human being for that matter!). Indeed, might love—how it’s cultivated and manifested—be key for spiritual growth no matter the religious tradition?

The Buddha described the purpose of the Dharma, his teachings, as “the liberation of the heart which is love.” We in the West have been bombarded with mindfulness this and mindfulness that, and it’s only lately that his many, many teachings on love and methods for its cultivation have come to the forefront of popular attention.

The word, love, has become a thin and worn currency in modern life; perhaps love, so essential to all humanity, should never be spoken without a moment of astonishment and a recognition of its effects. We use the word to denote, and connote, everything from romantic passion to a favorite food. “Love you,” we say as husband or child heads out the door. “Love you, too,” they say in reply, halfway down the stairs, voice buried by the roar of a passing car.

Christian tradition does have a word for love that is more spiritual in nature—the term, agape, which originally meant selfless love, an ideal echoed in Buddhism’s teachings on love. The Tibetan Buddhist tradition defines love explicitly: the wish for someone to have happiness and its causes.

Buddhism cultivates four kinds of love called the Boundless States, or the Four Immeasurables, none of which can be mistaken for romantic love, sentimentality or possessiveness. Boundless, or immeasurable, indicates that we cultivate love for each and every single being without partiality. Specifically, the Four Immeasurables are: loving-kindness (metta); compassion (karuna); empathetic joy (mudita); and equanimity (upekkha). Of these four emotions, metta, loving-kindness, goodwill or love—depending on the translator—is fundamental. For example, the application of loving-kindness towards suffering is compassion; likewise, the application of loving-kindness towards happiness is sympathetic joy.

“Equanimity,” argues Thanissaro Bhikkhu, in his article “Head and Heart Together,” is a slightly different emotion than loving-kindness, in that “it acts as an aid to and a check on the other three. When you encounter suffering that you can’t stop no matter how hard you try, you need equanimity to avoid creating additional suffering and to channel your energies to areas where you can be of help.”  Even so, the Buddha’s instructions regarding all four types of love are the same: a person dwells pervading the entire world everywhere and equally, his heart filled with love, “abundant, grown great, measureless, free from enmity and free from distress.”

The numerous metta, loving-kindness, practices of Buddhism begin with befriending ourselves. The Buddha taught the heart of a saying we have each heard many times: you can’t truly love anyone else until you love yourself. The Buddha said, “You can search throughout the entire universe for someone who is more deserving of your love and affection than you are yourself, and that person is not to be found anywhere. You yourself, as much as anybody in the entire universe, deserve your love and affection.”

Does that mean the Buddha promoted a narcissistic, navel-gazing love? No. He begins with a radical friendliness and compassion towards ourselves first. This isn’t easy. Look within: our conditioning weights us with judgments of right/wrong /good/bad, and we direct these verdicts more harshly towards ourselves than to anyone else. The Buddha’s antidote to such self-loathing is the standard prayer of loving-kindness:

May I be free from danger

May I be free from mental suffering

May I be free from physical suffering

May I have ease of well-being

Many of us improvise on these words, choosing sentiments we may connect with better. These phrases are then widened outward—more recognizably as selfless love—to include family, friends, those we don’t yet know, those whom we see as enemies, and finally to all creatures, all sentient beings everywhere. The Song of Metta, chanted by monastics and lay practitioners alike states:

Even as a mother guards with her life

Her child, her only child,

So with a boundless heart

Should one cherish all living beings,

Radiating kindness over the entire world:

Spreading upward to the skies,

And downward to the depths;

Freed from hatred and ill will.

Metta, the wish for true happiness for all, feels much like the quality of unconditional love shared in deep friendship. In fact, the Buddha addressed everyone, from peasant to nun to king exactly the same: Friend. Your best guide in life, he said, is a kalyanamitta, a beautiful friend, a spiritual friend, and he considered himself to be the very best kalyanamitta.

Searching for what love means within my adopted religion has been my beacon.  The more I’ve learned about the Buddha’s teachings on love, the more I’ve intentionally shaped my practice with them. There are many to chose from, and many guided meditations online. I’ve found that undertaking these practices generates a feedback loop eliciting, not surprisingly, more goodwill, more compassion, more joy and more equanimity. Perhaps the most remarkable feature of the Buddha’s love teachings is that practitioners find both immediate benefits—an immediate mind-state change—as well as long-term, substantive effects in perspective and emotional health. I only wish I’d understood their importance years ago because the joy felt in their cultivation is exactly what the Buddha describes in the Metta Sutta: a sublime abiding.

Most importantly, just as a farmer cultivates a harvest through toil and perseverance, rooting the Boundless States into one’s life requires long-standing effort. A monastic I spoke with had the following to say: “Speaking personally, I struggled with the issue of love too. I came to realize that my idea of love — and spirituality, for that matter — had an expectation of some feel-good, warm, and fuzzy quality that should arise spontaneously without me having to work at it. But that’s not what the Buddha’s talking about. Or maybe he is, but to develop spontaneous and genuine love for another is a habit we have to deliberately cultivate.“

The issue of love and Buddhism—or a certain lack of its visibility in much popular Buddhist literature and teachings—bothered me for decades. As you observed, Buddhism, as we encounter it in the West, often seems quite heady. Many people’s introduction to the Dharma happens through books, and that’s a radically different context from cultures where the teachings weave into the arc of life and its daily activities. Visit any Thai temple—even in the U.S—and you’ll see such an outpouring of generosity that you’ll feel cocooned in love; listen to a Zen teacher who has worked in hospice for years and you’ll have a taste of compassion that you’ll know in your bones is pure love; listen to a Tibetan monastic’s explanation of the Bodhisattva’s vow of selfless love and you will be moved to tears.

Interestingly, it may have been the Cartesian paradigm of a mind/body split that steered the ship of the Buddha Dharma reaching Western shores into the “heady” mind dock—it might have been the easiest fit for translators of Buddhist texts. Translation is tricky business (so I’ve been told), and this is a prime example. Buddhism uses a single word to denote an inseparability of mind/heart: chitta. As Buddhist teacher Sharon Salzberg says in Loving-kindness: the Revolutionary Art of Happiness, “Chitta refers not just to thoughts and emotions in the narrow sense of arising from the brain, but also to the whole range of consciousness, vast and unimpeded.”

In my experience, after a time, the two categories of practices meld and amplify one another: both invite in experience instead of forcing it away; both steady thought and diminish the push and pull of reactivity; both cultivate a feeling of safety and ease with embodied experience, often allowing an exquisite range of awareness much richer than the tyranny of discursive internal brooding. To quote Sharon Salzberg again: “Great fullness of being, which we experience as happiness, can also be described as love. To be undivided and unfragmented, to be completely present, is to love. To pay attention is to love.”