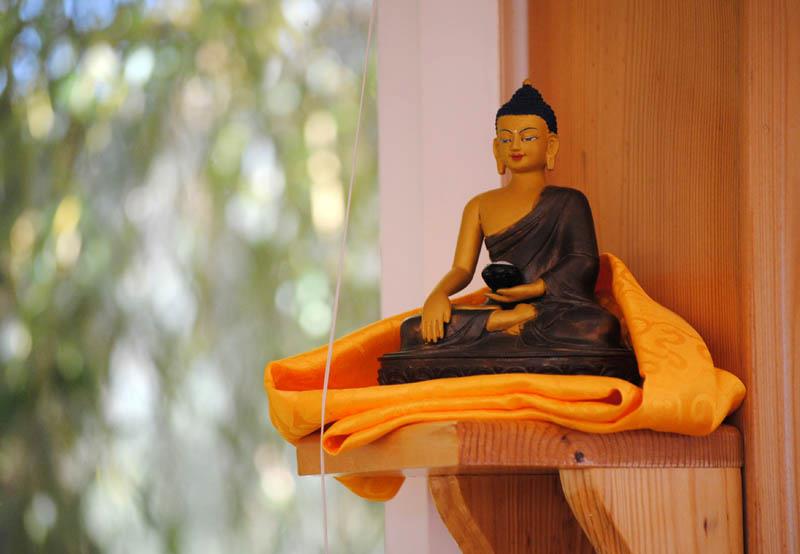 Ask a Buddhist: What has Buddhism Done for You?

Sarah Conover has been a Buddhist practitioner for nearly three decades. She’s ready to answer your questions about the faith. What do you want to ask a Buddhist?  Fill out the form below or submit your questions online.

What has Buddhism done for you?

Whoa — big little question! Simple question. Hard question. Totally fair question.  As a practitioner of nearly three decades who considers Buddhist practice as my life’s axis, I should be able to come up with a single-word response, and/or an elevator speech, and/or something to fit the setting and time commitment of My Dinner with Andre, right? But responding to this question makes me squirm. Really squirm. Is it because language parades as sufficiency? As Robert Macfarlane says:

“There are experiences of landscape that will always resist articulation, and of which words offer only a distant echo. Nature will not name itself. Granite doesn’t self-identify as igneous. Light has no grammar. Language is always late for its subject.”

Naming something, abstracting a process into a word happens so fast that we almost never notice this stunning reductive act: we have identified the wren, the Mt. Ash, the dahlia. We name it and wonder vanishes, so we attend to something else. A few years back, I spent an embarrassing amount of time trying to identify the yellow flowers that line every dirt road of North Idaho in late summer. They seemed to be so ordinary that no one had bothered to list them in any of my flora guides. The flowers had my attention until I found out they were simply called the common tansy. Having at last found their label, I felt relief and moved on. I moved right past the mystery that is a flower—all the causes and conditions—the particular minerals, insects, sunlight, clouds, seasons, snow, rain and seed to name a few—that come together as a brief and transitory event we call the common tansy.

Perhaps I’m being dodgy, but, like the Buddha said, all phenomena — whether mental or physical — are processes, empty of individual and independent substantiality. Through my engagement with “Buddhism,” I found myself in a forward-leading process, something akin to stepping into a river, an ever-widening and steadying river. Although the terminus is not yet discernible, the longer I travel, the more certain I am that the destination is trustworthy. I know this because the turbulence lessens and the water deepens sweet and clear. The distractions along the shore no longer hold my interest for as long, nor are there as many obstructions and snags.

However, I’m not just floating effortlessly — there’s real labor in the paddling and navigation. Not to mention some restraint around those shiny distractions. In his article, “The Agendas of Mindfulness,” Thanissaro Bhikkhu says that the Pali (the language of many of the earliest written scriptures of Buddhism) term for meditation is bhavana: development.

“It’s a shorthand word for the development of skillful qualities in the mind…This point is underlined by another Pali term for meditation: kammatthana, the work at hand, and by a Thai idiom for meditation: ‘to make an effort.’ These terms are worth keeping in mind, to counterbalance the common assumption that meditation is an exercise in inaction or in passive, all-encompassing acceptance. Actually, as described in the Pali texts, meditation is a very pro-active process. It has an agenda and works actively to bring it about.”

I’m still thinking aloud about my squirming. Perhaps the languaging of the question, “What has Buddhism done for you?” is problematic because it sounds like a practitioner is a passive recipient. That’s not likely how the question was meant, but it’s funny how the grammar pushes us into positing separate things, namely myself vis a vis an abstraction called Buddhism. Still sound dodgy?

The Buddha provided a process to be experienced and validated for oneself, not a dogma. So, one follows the Eight Fold Path (we’ll call it the Eight Fold Process for this article) of the Buddha’s teachings, and if it leads to a different relationship to suffering and hence a deepening contentment, perhaps that sweetness is the taste of faith. But see, I’ve boxed myself in again—positing contentment as a thing. Can you capture contentment, peace? Can you cup it in your hands? Contentment is one of many wholesome qualities I’ve experienced that increase over time with commitment to the Eight Fold Path. And speaking of dodgy—what about the word qualities? Cultivating certain states of mind and abandoning others that cause harm brings us back to the term, bhavana, the Buddhist placeholder for an on-going development.

With those caveats Dear Reader, I’ll put forward my one-word response as well as my short elevator speech. The single-word: kindness. Much more kindness towards others and myself is what Buddhism has done for me.  I’m stealing here from His Holiness the Dalai Lama who said: “My religion is kindness.” I titled my first book, Kindness, because of that quote. One could argue that all the Buddha’s discourses touch upon non-harming in one way or another through mindfulness, restraint, virtue, generosity, loving kindness and wisdom. How I wish we could simply say those nouns—abstractions one and all—aloud and they would manifest permanently; however, the task of being mindful to do no harm, to remember to be kind, requires “patient perseverance” as the Thai teachers are fond of saying—awareness and mindfulness, not just interpersonally, but intra-personally.  For instance, it’s fairly easy to catch an unkind tone of voice when speaking to another person, but how closely do you listen to your internal voice and its edge of self-evaluations? Does kindness predominate?

The elevator speech: an ever-deepening understanding of, and compassion for, the human suffering caused by our common, fundamental misapprehension of personhood and the world. Granted, I’m not sure which elevator crowd that statement would work for—perhaps one in a university philosophy department, or maybe with a group of stoners on a joy ride.

The fundamental misapprehension of personhood that the Buddha penetrated is that we live our lives as if we are separate, independent and hence almost invulnerable. I notice the suffering—as well as the moments of happiness— from this misconception much more now, both in myself and in others. I welcome that awareness. As Ian Maclaren said, “Be kind, for everyone we meet is fighting a hard battle.” Working with elders for the past few years, I see this truth vividly borne by their stories and their bodies; however, if you probe just a little, almost everyone you meet, irrespective of age, is marked by some significant experiences of suffering.

The idea of opening to the awareness of suffering is a central motivation for Buddhist practice. Norm Fischer in his brilliant article, “Suffering Opens the Real Path,” says that we might find the word, “suffering,” too alarming to take a clear look at it. “Dukkha,” he says, “refers to the psychological experience—sometimes conscious, sometimes not conscious—of the profound fact that everything is impermanent, ungraspable, and not really knowable. On some level, we all understand this. All the things we have, we know we don’t really have. All the things we see, we’re not entirely seeing. This is the nature of things, yet we think the opposite. We think that we can know and possess our lives, our loves, our identities, and even our possessions. We can’t. The gap between the reality and the basic human approach to life is dukkha, an experience of basic anxiety or frustration.” To begin understanding the human predicament in its true fullness is to begin dissolving that sense of invulnerability and separateness from others—an apt description of compassion.

I also find the motivation for compassion in Yeat’s description of the human situation: “We are fastened to a dying animal.” The Buddha suggested corpse contemplation (among many other methods) to keep us in Reality School. Together, these two broad themes of mental and physical suffering—dukkha, the First Noble Truth of Buddhism—catapult me into believing that compassion and kindness are the only acts in life that make any sense at all. Ever.

Buddhism has given me the orthodoxy and orthopraxy to bring my attention back again and again to these basic realities of the human predicament, as well as the means to cultivate love in response, deeming loving kindness and compassion as two of the Four Immeasurables. Indeed, is there a limit to situations where kindness and compassion can’t be drawn upon?  Of course, Buddhism isn’t the only wisdom tradition that sets us on the path of kindness: love and compassion are basic strands found in all the world’s wisdom traditions. In fact, Mother Theresa may have said it best of anyone: “May God break my heart so completely that the whole world falls in.” But I do believe that the Buddha laid out very systematic, practical and psychological methods to rouse and sustain compassion and love for all living beings (see the Ten Perfections), and because of those teachings I practice the Eight Fold Process.