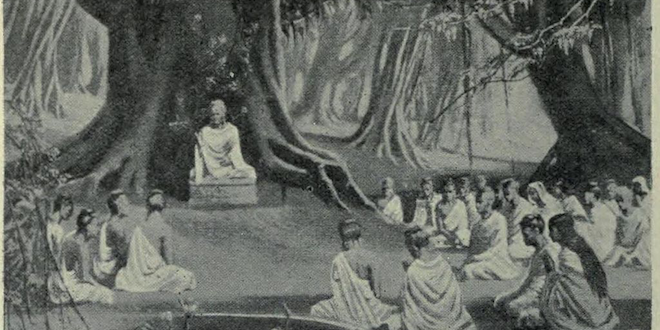 Ask A Buddhist: Was the Buddha a Deadbeat Dad?

Sarah Conover has been a Buddhist practitioner for nearly three decades. She’s ready to answer your questions about the faith. What do you want to ask a Buddhist? Submit your questions online.

Was the Buddha a Deadbeat Dad?

Wasn’t it irresponsible for the Buddha to walk out on his wife and child?

First off, I would reframe the Buddha’s “walking out on his wife and child” as the singular act of renunciation—the commitment to relinquish the concerns of lay life for a higher calling. Giving up a “normal life” in the Buddha’s time has to be seen in its own landscape: His departure would have been frowned upon first and foremost as an abandonment of his duties as prince and successor to the royal throne; in the context of his culture, leaving his wife and child was a secondary concern. There’d be no question that his wife and son would be very well cared for by the royal family.

From ancient times onwards, retreating to the forest for spiritual growth has remained a universal theme in Hindu myths and cultures—the surrounding conditions of Buddha’s life. It’s important to note that people in his time really saw value in leaving the household life at some point in their lives. A number of kings did so late in life. Sometimes, masters would even grant their slaves freedom in order to pursue the holy life.

What is the story of the Buddha’s renunciation—his departure from lay life—in the Buddhist canon? Legend has it that a seer visited the king, the Buddha’s father, before Siddhartha Gautama’s birth (the future Buddha), warning him that his son would be either a great king or a great spiritual leader. Wanting to take no chance that young Siddhartha would disclaim his duty as future king, his father purportedly cocooned him in luxury and from awareness of sickness, old age and death. But Siddhartha escaped the palace one night with his attendant, and got an eye full of human suffering in much of its variety. The experience affected him so profoundly that his life’s trajectory changed from future sovereign to a mendicant set on finding the answer to human suffering. Like I said, this is legend, but as they say in the movies, “based on a true story.”

When Siddhartha Gautama did leave his family soon after, he clearly felt that his departure would, in the end, benefit many more people in profound ways than his remaining involved in royal duties. Consider that his father became a disciple; his wife, his son, and his step-mother (his birth mother died in childbirth) all ordained as monastics in his lifetime; further, it became a tradition of the Sakya clan (his royal family) to ordain. Further still, for over 2500 years, his teachings have proven to be a wellspring of guidance for happiness amongst millions.

There’s no doubt, however, that to disavow the concerns and responsibilities of lay life causes internal and external ripples. The Buddha foresaw this (likely in some part from his own experience) and required that a novice get the permission of his/her parents to fully ordain as a monastic. This rule applies to monks and nuns ordaining today as well as millennia ago. Additionally, they cannot ordain if they have any debts—and that includes the debts of spouse and immediate family. Families have to be left in good situations. Thanissaro Bhikkhu, a contemporary scholar-monastic, believes that if a husband leaves a family in unresolved circumstances, his progress on the Path may be hampered because he is not honoring his previous actions, or karma. Such a radical action must be undertaken with much consideration and forethought.

Ultimately, as in nearly every religious tradition, reconciling worldly values with those in the pursuit of the holy life becomes the great challenge, if not the practice itself. The austerities proscribed in the Vinaya for instance, the several hundred rules of daily life that Buddhist monks and nuns must follow, directly counter just about every idea of fun, comfort, and desire that most of us spend our days pursuing. In the Thai Forest Tradition, the Buddhist tradition I’m most familiar with, you are entirely dependent upon what others offer you to eat; you can’t eat past noon; you can’t store food (you don’t know where your next meal will come from the next day); you can’t sleep on a soft bed; you can’t play music or watch entertainment; you can’t touch money; you can’t engage in any sexual activity or even be alone with the opposite sex; you can’t partake of any intoxicants; you can’t harm any sentient being including the fifty mosquitos biting you in the jungle.

This list is a tiny fraction of the precepts monks and nuns agree to follow. By these measures and austerities, the Buddha clearly enjoined and supported his disciples in focusing elsewhere for a trustworthy happiness not available in our mutable worldly pursuits. You can be sure that to give up everyday desires and satisfactions is a hard, huge step away from what keeps the rest of us churning and chugging along. I have difficulty keeping the eight lay precepts even for a weeklong retreat, finding myself counting down the days until I get “a break” and can dive back into my favorite treats and routines. Monastics don’t get a weekend, or a break, or a vacation from their austerities, ever. I’m more than amazed at the restraint and mindfulness required by their vows. I can only assume a great faith sustains them, and that they’ve had a glimpse of a great reward. And therein is the rub for those who feel “left behind” and abandoned: they have yet to have an experience of the worthiness of pursuing liberation, or have yet to see clearly the suffering inflicted by the profound entanglements of worldly life. One could argue that in many ways, lay life and monastic life are opposite in their vision of a life well lived.

I feel I’m able to address the question with a little personal stake in and experience with this complicated issue. My son ordained in the Thai Forest Tradition over three years ago, and nearly everyone in his circle of friends and family felt it as an abandonment. His sister, his grandparents, his aunts, and all but one of his best friends, were bereft. No more Nate the musician, the leader of sing-alongs, the mountaineer, the skier, the vivacious never-say-no to anyone’s adventure; the great shoulder for every heartache, the universal hugger. Now we have Venerable Nisabho, a moniker that has recently and fortunately shortened to Tan Po. Still a great friend and listener, but at this stage in his young monastic life, secluded from contact with most everyone (except his nuclear family) but for once or twice a year. Last year, during one particular breakfast we had at a Seattle café on his first return visit, an old, good friend just stared at him—stared at this now soft-spoken stranger with a shaved head and shaved eyebrows wrapped in an acre of twisted saffron robes—and wordlessly cried a continuous stream of tears throughout the meal. She understood completely that he’d stepped “out” of his former life and its norms of socializing, but she had no experience from which to support his aspiration, so she could only frame it as abandonment.

My husband and I raised him as a Buddhist, and clearly, he took to it. As one friend quipped about his turning down graduate school, giving away everything he owned, and leaving what we consider a normal life to ordain: “well, you sure helped to create that idea!” Point taken. Sometimes when I really attend to our situation, it physically hurts to live so far from him. Once, when I visited Tan Po in Thailand, he asked how it was for me and if I missed him; I found myself erupting in tears and sobs I didn’t know were waiting close by, the kind of grief that comes without an off switch until is thoroughly spent.

Then again, I’m very lucky as my son, my husband, and I talk for at least an hour every other weekend to discuss our Buddhist practice and epiphanies. That we share our most profound spiritual aspirations as well as a parent-child bond—the two deepest connections you can have with another person—makes me feel crazy-blessed. His level of commitment to the Dharma, the teachings of the Buddha, is an ever-present inspiration and boost to mine. From what I understand, this is a rare situation. I have enormous sympathy for parents of monastics who are not Buddhist practitioners or part of a Buddhist culture (where the act of ordaining is normalized somewhat). It has to seem to these parents, at least for some time, that their child took off to another planet with completely new set of rules, rituals, language and definition of a meaningful life.

Only time will allow friends and relatives to be convinced that the austerities and withdrawal necessary to Tan Po’s chosen path is truly a process of deep transformation, of cultivating goodness and freedom as much as for himself as for them. After his sister, Jamey, visited him in Thailand, the anger she’d had at his leaving vanished. She still misses her brother of course, but says that being with him in a monastery was like “seeing an animal in its natural habitat.” She can’t even imagine him doing anything else now.

The fact is that Nate, valedictorian and general golden boy in his previous life, could have chosen any career. But he is convinced he can do the most good, not just in the world, but also for those close to him, through this radical choice to live as Tan Po. In leaving his royal life behind, the Buddha—as well as every disciple that followed him for the last 2,500 years—must have felt much the same way.

Tags ask a buddhist buddha and deadbeat dad the buddha