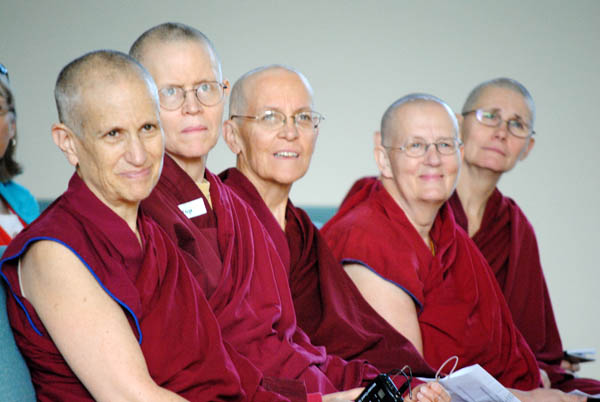 Ask a Buddhist: How do I address Buddhist nun?

Our Gospel & Soul Choir was invited to sing at the Buddhist Temple (in Australia). Our tour leader referred to the Nun as “Reverend” only. As a choir member singing Christian songs at the Temple, I was very impressed and moved by the warm welcome we received. The nuns gave each of us a gift and I would like to send a “thank you” card.

Question 1: How do I address the Reverend if I don’t know her name?

One of our choir members is a practicing Buddhist and she was very upset and in tears that we sang Christian songs at the Temple, although she did not have any problems at all singing Christian songs in other places, including an Anglican Church. I told her that I felt that the invitation to sing at the Temple showed generosity, openness and tolerance toward another religion and that we were not there to ‘convert’ anybody and were just sharing our music. One of the nuns made photos and four of the other nuns wished to be in the photo as well. Personally, I think this is really nice. May I ask what you think of this?

This is the Temple.

How lovely that your choir had the chance to perform in Australia! And I think it’s wonderfully generous of the Nan Tien Temple to invite you.

Nan Tien is a branch temple of Fo Guang Shan (FGS), one of the largest Buddhist organizations in Taiwan. The nuns at Sravasti Abbey are familiar with them, as three of us trained and received full ordination at FGS temples. Practicing in the Chinese Mahayana Buddhist tradition, FGS espouses a philosophy of Humanistic Buddhism that is inclusive in its application.

The Nan Tien website tells us, “The temple focuses on the exchange of Eastern and Western cultures; the interchange of the traditional and the modern; and also the adaptation with the local communities.”

With such a mission, it seems natural that they would invite your choir to perform your full repertoire, Christian music included. I can empathize with your Buddhist singer’s discomfort, but since you bill yourselves as a Gospel & Soul choir, the monastics at Nan Tien might have known what to expect.

Generally, a Buddhist monastic can be addressed as “Venerable.” If your host is the head of the monastery, he or she should be addressed as “Abbot” or “Abbess.” It’s fine to address your card to “All the Venerables at Nan Tien Monastery” or “To the Venerable who welcomed our group,” or something general like that. Referring to them as “Reverend” was not a mistake: it’s just a different term, and some Western Buddhists do use it. For example, the monastics at Shasta Abbey Zen monastery in Northern California use “Reverend.”

Whatever the tradition, I think sending a thank you card is always appropriate. Send it as an individual or on behalf of the whole group. Either one is suitable.

That you wish to acknowledge the kindness of the Nan Tien nuns in that way tells me you are a person who values kindness. Wonderful! I firmly believe the world is better off when we share the kindness we all have inside. Christian, Buddhist, Muslim, Jew, atheist, whatever—no one owns the market on kindness. It’s universal and much appreciated wherever it blooms.

Ven. Thubten Chonyi is a nun in the Tibetan Buddhist tradition. She has studied with Sravasti Abbey founder and abbess Ven. Thubten Chodron since 1996. She received novice ordination at the Abbey in 2008 and full ordination in 2011 in Taiwan. Ven. Chonyi regularly teaches Buddhism and meditation at the Unitarian Universalist Church of Spokane and other local locations.