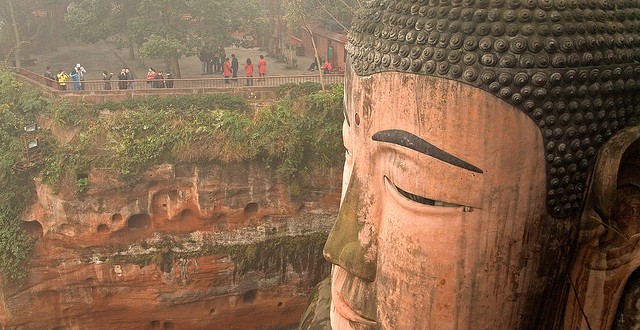 Sarah Conover has been a Buddhist practitioner for nearly three decades. She’s ready to answer your questions about the faith. What do you want to ask a Buddhist? Submit your questions online.

It seems Buddhism has become ‘trendy.’ Why do you think this is?

Venerable Chonyi, one of my nun friends at Sravasti Abbey, had this response to your question:

Why Buddhism is trendy has nothing to do with Buddhism, does it? Well, maybe this: people have basic kindness and goodness. Many people feel disaffected with their religion of origin and disenchanted with the runaway materialism of our time. Anything that makes reasoned sense and offers a little peace—and gives people some hope in their goodness—will appeal.

She cuts through a lot of mystification with those simple words. But alas, I’d have to end the article right here, and I’d like to tease the trendy-ness apart a bit more. Sure, it’ll lead to a little complication and speculation, but hopefully also some food for thought. With a degree in religious studies, with feet in both secular Buddhism and religious Buddhism, I find the unfolding of this trajectory incredibly fascinating—an experiment we can watch up close, an unprecedented new historical chapter in Buddhism and in modern culture. Let’s look at some of the possible conditions for this shift—oh let me count the ways (so many I’ve had to trim quite a few from this list).

Let me start off by saying that, in my view, it’s not traditional Buddhism that is so very trendy, but mindfulness—a slice of the Buddha’s teachings—that has been extracted, secularized, and radically reinterpreted for popular consumption. Indeed a tsunami of mindfulness teachers, books, films, workshops, and retreats have found their way into every corner of American society and its institutions from schools to psychotherapy, to medicine, to science, to professional sports, to corporate trainings and even to the military. We could gloss over this situation, but if you substitute another religion-based practice such as counting the rosary, it might allow a little perspective on how unusual this mindfulness trend is! According to Jeff Wilson in “Mindful America,” mindfulness related products and services are now a $5 billion industry. You can hear him speak about his new book (another mindfulness publishing success) on the Tricycle Talks podcast: he is one of the few religious studies professors publishing on this issue.

By focusing solely on mindfulness with no commitment to its religious roots, this narrow portion of the Buddha’s teachings has been adopted into our culture as easily as sushi. Further, with this trend, the authority to teach mindfulness has greatly shifted from religious authorities to laity. As a consequence, what’s presented in the West through this avenue absents most of the central and vast canon of Buddhist teachings, the Dharma. For example, in the pop mindfulness movement, you won’t find a list of virtues as the first and most important steps of mindfulness training, nor will you likely hear any mention of karma and its trajectory through rebirth over lifetimes. Even the word alone—mindfulness—is more benign than the “Co-Exist” bumper sticker, all the fire and brimstone of the Dharma washed out of the term. But think of it’s opposite: mindlessness. Who would claim that being mindful isn’t a better way to be in the world?

Other speculations: I could be projecting here, but it seems to me just about every person I know feels strafed by the many toxic forces of speed and distraction (etymology of distraction—to be pulled apart) in our lives. The fact Mindfulness promises a way to temporarily pull out of the fray into the solace of mental and physical quiet—and least for a few moments. Additionally, overwhelming problems nationally and globally turn all of us into seekers, don’t they? And we Americans have a rich vein of history to draw upon: spiritual seekers colonized this nation. Further, the roots of our nationalistic vision have always tinted utopian.  We are undaunted individualists and perpetual self-improvers: mindfulness promises a greater, more harmonious society by an individual’s efforts, present moment by present moment.

Even American patriotism pulls the mindfulness train along:  life, liberty and the pursuit of happiness. Happiness (the Buddha promises an end to suffering, right?) recharges the mythos of our stated national pursuit with new spiritual vigor and validity. Mindfulness also offers the ultimate in religious freedom: a personal spirituality that is nobody else’s business, as close as our own mind/heart. One could also joke that it’s as close as the iPhone in our pocket with the entire canon of Buddhism available and thousands of teachers to guide us, a fact which brings us to yet another condition for the American mindfulness mania: it’s portable! As long as you are breathing, your breath as an object of attention comes with you. We can practice while driving, shopping, walking, or sitting in an airplane.

And I have yet to mention mindfulness’s rise to the zenith of the self-help, healing and health worlds through media, books and stardom. To name a few: Oprah’s interviews of Thich Nhat Hanh and the Dalai Lama (the world truly needs these heroes); best-selling author John Kabat-Zinn’s Mindfulness Based Stress Reduction adopted by many in the medical and psychological fields; and scientific studies backing mindfulness’ effectuality in reducing stress and increasing brain plasticity.

OK, perhaps I’ve had a little too much fun being sassy. I confess to listening to online Dharma talks daily, and would highly recommend online guided meditations. Mindfulness is good for you. In fact it’s more than good for you: it’s a practice that can land you in astonishing mind states—fully in awe of life. Anyone—Buddhist or not—who remembers to bring more awareness to her daily life and tasks can validate some immediate fruit of mindfulness.

An experienced practitioner would in fact tell you that steady mindfulness has the potential to encompass the whole path of the Buddha’s teachings: all the factors of liberation such as compassion, joy and tranquility are potentially present. What isn’t being sold by publishers or taught in corporate seminars is the Buddhist soteriological view—a very clear idea of salvation. The Buddha’s true purpose was to teach a path to happiness outside of, and not dependent upon, any of the changing conditions of phenomena. This is no small deal, because the Buddha’s path to achieving true freedom—ultimate freedom known as liberation—is a path suffused with morality, sense restraint, and abandoning the notion of an individual self. These aspects of Buddhism require a radical and relentless shift in perspective from “I, me, mine.” And I do mean radical: our body is on loan (would you sign up for sickness, old age and death given the choice?); our thoughts don’t belong to us (did you create your brain, would you choose emotional suffering over joy, and how long can you hang on to a single thought anyways?); our beloveds don’t belong to us; our possessions are just “decoration on our graves” as Venerable Chodron warns. Mindfulness in its true breadth and depth is in fact a gradual process of disassembling most everything society points to as real and lasting, most everything we’ve spent our life’s energy trying to solidify. To really see things as they are includes the reality that all things are dying the moment they are born. And to dip a bit cliché, knowing and feeling the human predicament with this quality and reach of mindfulness does not lead to doleful nihilism, but to further astonishment and awe of life.

Should the loss of the traditional religious dimension of the Buddha’s teachings diminish the benefits of trendy Buddhism and popularized mindfulness? Does this mean that we shouldn’t appreciate every moment more, or live more harmoniously with the aid of Buddhist awareness practices? Of course not. But perhaps popularized mindfulness can open other doors for society. I’ve fantasized a situation in which generosity—a premium value in Buddhist ethics—becomes wildly trendy. What might that America look like? Or what if kindfulness, a term that Ajahn Brahm promotes, becomes the next craze?

Venerable Chonyi finished her letter to me with this:

I will rejoice when Buddhism is not an industry, when meditation is not separated from the Buddhist view of how things work in the world (karma and its results, ethics as the basis for happiness…compassion overriding self-centeredness, and wisdom in tandem with compassion trumping everything). If THAT becomes a trend, there’s some hope for our future.