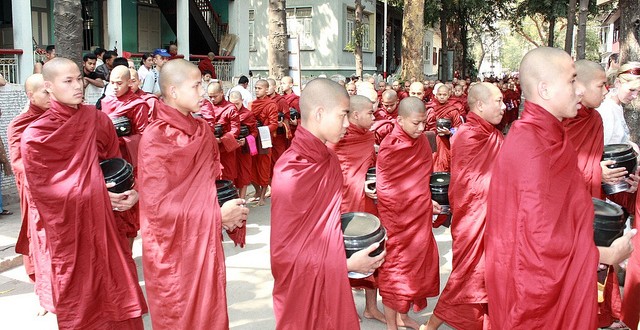 Ask A Buddhist: Can LGBT people be ordained?

I am quite new to Buddhism. I have a question in regards to monk ordination, specifically about LGBT people being ordained. I have read that in some temples and monasteries it is fine and then in others it isn’t. By fine I mean they can be ordained if they remain celibate and the like, and in others they can’t be ordained no matter what.

I just wanted to know what your thoughts were on the issue and if you can shed some light on it.

Questions about sexuality shouldn’t be an issue among Buddhist monastics because of what you noted above: celibacy. However, shouldn’t be doesn’t mean it isn’t. As with any of the myriad ways we self-identify, the categories of lesbian, gay, bi or transgendered, are among dozens of self-conceptions we are drawn to or burdened with. For most people who identify within LGBT, the label seems to be a primary piece of selfhood, seen as an essential aspect of their personal narrative. Monasticism, with the ultimate aim of liberation, is a committed and extended effort to be free from the suffering caused by all narrowed views of selfhood.

The ordination ceremony and the 230 and more rules monastics must follow afterwards are just a starting point, a clear demarcation of abandoning one’s former identity on symbolic and psychological levels. Among the list of things surrendered in the ordination formalities are one’s autonomy, beautification of the self, posturing of gender, and even one’s birth name. The nun’s (or monk’s) hair is shaved to look like an old man, she’s given robes that were traditionally sewn from scraps found in the charnel grounds, all her possessions must be forfeited, and her choice of activities will no longer be her own. And that’s just a sweeping summary of the fine print. “From the outset,” says Bikkhu Bodhi in his essay, Lifestyles and Spiritual Progress, “the monk’s life is rooted in renunciation. In ‘going forth,’ the monk leaves behind family, possessions, and worldly position, and even the outer marks of personal identity, symbolized by hair, beard, and wardrobe. By shaving the head and donning the yellow robe, the monk has given up — in principle at least — any claim to a unique identity as his own.”

Thus begins the real work of a monastic: cultivating a wisdom that sees through the normal misapprehension of phenomena including the identities most of us cling to life-long (until death do us part). For the new monk or nun, all the badges of selfhood, achievements, and individuality we’ve carried throughout our lives, all the ways in which we curate our uniqueness (pretty much the ways most of us fill our days) are formally surrendered. Buddhist practice, whether for the lay person or the monastic, aims to find a deeper understanding of the nature of identity and the ways it derails human happiness.

My direct experience at several monasteries across several traditions and cultures is that the sangha (the monastic community) tends to be a safe harbor for gay and bi men and women precisely because one of the intentions is to abandon sexuality — its burdens, needs and complications. That task, however, doesn’t mean it happens instantly or easily.

In the specific arena of sexuality, Buddhist monastics follow rules prescribed in a collection called the Vinaya, and not a few target aspects of sexual decorum and activity. For example, in the Thai Forest Tradition in which my son is ordained, women and men must keep a certain distance apart and never touch (in fact an offering cloth is used to pass items back and forth between them). In the sexual activity arena, you can be sure protocol is explicit: wet dreams are “allowed,” but masturbation is an intentional act that must be confessed to the whole sangha; a sexual affair can lead to expulsion from the community.

Why so many strict rules we might wonder? Are they simply conservative formalities from two thousand years ago? It is said that the Buddha only implemented a rule for the sangha when he saw a need for it. The sexual drive is so primary to every human, that the specificity of the rules around sexuality signals their need — almost as protection of virtue. I have heard a number of monastics attest to this. As a twenty-something healthy male, my son has conveyed that certain situations are absolutely “kryptonite” for him and he must keep his distance.

In terms of transgenderism — something I’d never considered in this context — I had to run my response by an ordained monastic. Much to my surprise, the Buddha did give it some thought. Somewhere within one of the Vinayas said my nun friend (not all denominations have the same rule book), the Buddha allowed that if you ordain as a monk and become a woman, you can be considered a bhikkhuni, a nun. (I’m unsure if the opposite was considered a possibility millennia ago).

At the time of ordination, you do have to identify your gender: “I am a man,” or “I am a woman.”  Hermaphrodites, because of the sexual blurring, are not allowed to ordain. Initially, this obstacle seemed unjust to me until I considered how carefully the sexes are segregated to protect the virtue of each.

My nun friend had never heard of someone being unable to ordain who previously identified as LGBT.  Upon ordination the person is not asked, “Are you a hetereosexual?” All monastics are expected to remain celibate.

I’d like to close with a quote from Buddhist teacher and former monk, Jack Kornfield, that circles back to the predicament of self-identification and its confining views: “Without being aware of it, you take many things as being your identity: your body, your race, your beliefs, your thoughts… In opening we can see how many times we have mistaken small identities and fearful beliefs for our true nature and how limiting this is. We can touch with great compassion the pain from the contracted identities that we and others have created in the world.”