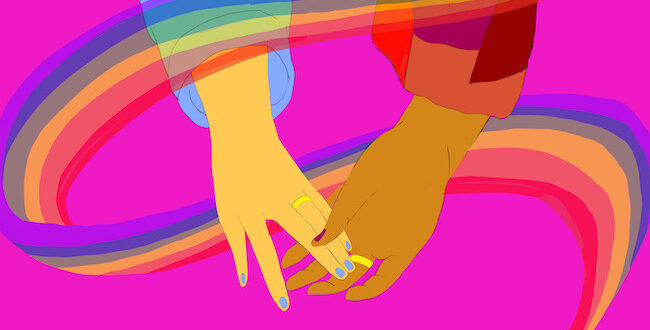 Every little girl dreams of her wedding day, or so it’s said.

When we were young, my friend Kelly would wrap a white sheet around her head and pretend it was a veil. Then she’d walk slowly through the living room “aisle.” Step-together, step-together.

One day she hoped to wear an elaborate gown and stand in the front of a church arm-in-arm with a man in a tuxedo – just like the classic cake topper.

That’s not what I wanted, and I wouldn’t play along.

Instead I would take her sheet, pin it around my neck like a cape and jump off the stairs.

Back then I couldn’t envision, or even understand what I wished for. There weren’t any wedding cakes with two women on top.

And it remained that way until I was 30 years old.

As a religion reporter, I covered both the state and federal milestones. I interviewed couples who rushed to their affirming church or the courthouse. I also interviewed pastors, protesters and politicians who opposed the legislation.

Not all, but many of those who were against this LGBT right spewed their anger and disgust to me freely, obviously not aware that I was part of the community they detested so much.

I went home and cried.

These were times for celebration, yet hate (fear?) found a way to blatantly show itself and crash the day.

I’ve covered LGBT issues my whole career and am usually good at separating myself from the story, but sometimes hurtful words linger.

We Have Work To Do

As a kid, I didn’t act out my wedding day with my friends, but I have daydreamed about finding the one woman I’d spend my life falling in love with over and over again.

To me, because both my parents left, marriage is especially sacred. There’s nothing I long for more than finding someone who chooses to love me their whole life – unlike a family member, who is expected to.

So many people, though, want to prevent that from happening – even today.

The United Methodist Church is likely to split in part because of disagreements over ordination and marriage of LGBTQ members. It wasn’t long ago the Supreme Court sided with a Catholic adoption agency who refused to work with LGBTQ couples.

And the 2022 legislative session proves that we have a long way to go in fighting homophobia. Dozens of states are considering legislation related to LGBTQ discrimination, many attempting to single out and target LGBTQ people.

One glaring example is the Florida “Don’t Say Gay” bill that is getting traction. It would limit classroom discussions on sexual orientation and gender identity, and encourage parents to sue schools or teachers that engage in these topics, according to ABC News.

Some people don’t want kids to know there are wedding cake toppers now with two women, or two men.

We made huge strides in 2012 and again in 2015, but we have to keep moving forward. We can’t stop until the rights of everyone in our communities are recognized.

I lost touch with my childhood friend, Kelly. I’d like to think she got to wear her veil.

Maybe I’ll get married one day too. If my future wife is reading this: I won’t wear a cape and jump off the stairs on our wedding day. But I will always cherish our right.