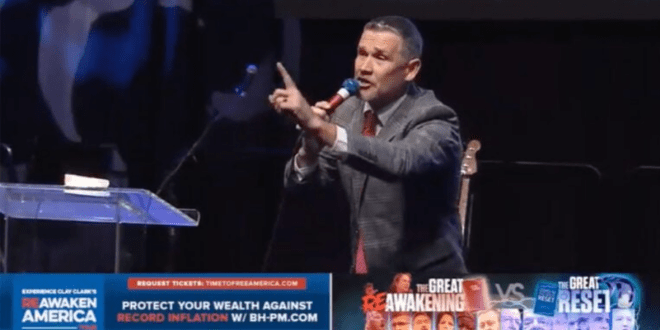 As Christian nationalists get more specific, ideological and theological divisions have reemerged.

When Tennessee Pastor Greg Locke took the stage at the ReAwaken America Tour in Pennsylvania over the weekend, the throngs who had come out to hear conspiracy theories and inflammatory rhetoric about Democratic candidates instead heard Locke aim some of his sharpest criticism at a surprising target: Pope Francis.

“If you trust anybody but Jesus to get you to heaven, you ain’t going,” Locke said, his voice rising. “You say, ‘Well what about the pope?’ He ain’t a pope, he’s a pimp … He has prostituted the church.”

It was an odd note to strike at a rally where perhaps the biggest name on the speaker’s roster was retired Gen. Michael Flynn, a Catholic who later made it a point to mention his faith while voicing support for Christian nationalism. “I’m a Christian — I’m a Catholic, by the way,” said Flynn.

Locke had aired his anti-Catholic position a few days before in a Facebook post advocating for burning rosaries and “Catholic statues.” When another user urged him to abandon the anti-Catholic rhetoric, Locke doubled down. “Catholicism is idolatry 100%” he wrote. “I will not be silent whether you follow or not. It’s a false pagan religion and so filled with perversity it’s ridiculous.”

Anti-Catholic rhetoric has long been a theme in nativist American thought, which includes some forms of extremist Protestant Christian agitators such as the Ku Klux Klan. But in the current Christian nationalist surge that fuels the ReAwaken gatherings and others like it, the ideology has served more as a glue holding together a wide range of right-wing coalitions. Locke’s remarks injected an uneasy tension, raising the prospect that what was once a unifying force is now prone to causing potential divisions in right-wing ranks.

The theological differences among the hardline Christian nationalist groups — some now emboldened to the point of embracing the Christian nationalist label — have been present from the start. Texas Pastor Robert Jeffress, who rose to national prominence as an early supporter of then-candidate Donald Trump, is an ardent purveyor of Christian nationalism. As far back as 2018, Jeffress preached an Independence Day-themed homily titled “America is a Christian nation,” and he now sells a book of the same name.

Before then, the pastor was known for railing against the Catholic Church. In 2010 he argued it was little more than a “cult-like, pagan religion,” adding, “isn’t that the genius of Satan?” A year later, he also decried The Church of Jesus Christ of Latter-day Saints as a “cult” and a “false religion.”

But Jeffress and other faith leaders’ sectarian rhetoric faded as they made common cause in support for the president. After Trump was voted out of office, Catholics and conservative Protestants were unified in the Stop the Steal movement. By the time the movement culminated in the Jan. 6, 2021, attack on the U.S. Capitol, a curious form of Trumpian ecumenism had taken hold, as rioters of several faiths prayed together as they led the assault.

In the aftermath of Jan. 6, several types of extremists gravitated toward Christian nationalism and claimed it as their own, some linking it to opposition to pandemic restrictions, masks and vaccines and others incorporating the ideology into attacks on LGBTQ people.

But within this cohort, the different variants of Christian nationalism began to show themselves and develop. Even as Locke was becoming a major Christian nationalist voice, Nick Fuentes, the white nationalist head of the group America First, and a Catholic, was on the rise as well. While Locke has advocated for burning rosaries, Fuentes has celebrated the idea of “Catholic Taliban rule.”

Meanwhile, Andrew Torba, the head of the alternative social media website Gab, which has been widely shamed for sharing antisemitic messages, has presented in a new book another form of Christian nationalism, one that rails against groups that center on End Times theology — particularly the belief that the Second Coming is imminent. Torba and his co-author refer to these ideas as “an eschatology of defeat” and blame their advocates for a moral decline of society.

“You cannot simultaneously hope for a revival of Christian faithfulness in our nation while expecting the world to end at any moment,” Torba and his coauthor wrote.

Torba’s critique is not likely to go down well with various evangelical, Pentecostal and Charismatic traditions that have made the End Times central to their message, among them Trump’s biggest supporters. Jeffress has published two books focused on the topic — “Countdown to the Apocalypse” and “Twilight’s Last Gleaming.”

Rep. Lauren Boebert, who made headlines earlier this year for arguing against the separation of church and state, also outlined support for the theology in a recent speech.

“Many of us in this room believe that we are in the last of the last days,” she told attendees at a Republican dinner in Tennessee. “You get to be a part of ushering in the second coming of Jesus.”

These differences are unlikely to affect the Christian nationalists’ common front immediately or slow their approach to the coming elections. Hardline Christian nationalists across the ideological spectrum are more apt to focus on Democratic candidates and their supporters as a common enemy. Nor are figures such as Locke likely to topple a conservative Christian coalition that dates back to the 1970s, when a truce was struck between the likes of Pat Robertson and Jerry Falwell and the anti-abortion Catholic right.

If Trump runs for reelection in 2024, it’s likely many who trumpet Christian nationalism will simply set their differences aside — just as they did the last two times he ran for office.

But with many on the extreme right distancing themselves from Trump, and the pandemic and COVID-19 vaccinations no longer making the headlines they once were, the faithful who are drawn to rallies such as ReAwaken America may encounter new fissures as they debate new causes to rally behind — or against. Some Christian nationalist voices, such as Jeffress, have already peeled off. “There is no legitimate faith-based reason for refusing to take the vaccine,” the pastor told the Associated Press last year. He also declined to argue that the 2020 election was “stolen,” a common refrain among many right-wing Christian nationalists.

And even if attendees and speakers at the ReAwaken America tour write off pastors like Jeffress, a question remains: How long will Catholics like Flynn abide attacks on their faith from even their most stalwart Protestant collaborators?

Previous Spokane’s Camp Hope is the center of a political storm
Next In Spokane, Pagan Blackout Ritual Observes the Darkness of Winter