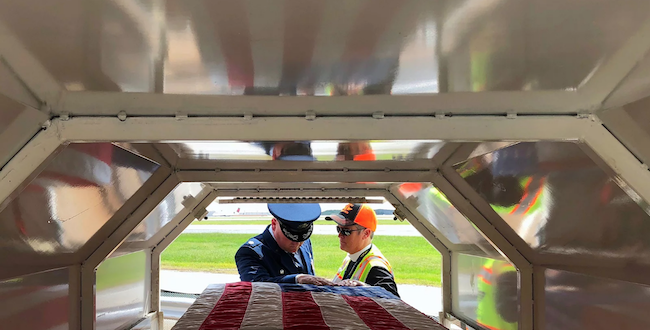 The Rev. Donna Mote, right, a chaplain at Atlanta’s Hartsfield-Jackson International Airport, prays over a coffin with a military escort for the life and service of the deceased. They also pray for wisdom and courage for the escort in completing the sacred duty. Photo courtesy of the Rev. Donna Mote

As Americans become less religious, the role of chaplains may grow

The Rev. Donna Mote regularly accompanies military personnel escorting the caskets of fallen service members through Atlanta’s Hartsfield-Jackson International Airport, where she serves as a chaplain at the busiest airport in the world.

Mote is the first person to greet the escorts once they step off the plane. She stands shoulder to shoulder with them while Delta Honor Guard members march with flags of the five military branches. She stays with them through their layover at the airport. She’s there for support. In many cases, the escorts are grieving because they knew the deceased.

When it’s time to go, Mote helps with check-in at the departure gate, walks down the jetway, and once the remains have been confirmed, she heads up the airplane stairs with the escorts to bid them farewell.

Mote extends her hand for a proper handshake, but she’s often embraced with a big hug, followed with a “thanks, chaps” or a “thanks, padre.”

“These are among the highest compliments I’ve ever received for any ostensibly religious work anywhere,” said Mote, an Episcopal priest.

Chaplains like Mote have long been familiar faces at airports, hospitals, colleges, military bases and other places. They do ministry in the midst of everyday life dabbing ashes on Congress members’ foreheads during Ash Wednesday services, supporting students in crisis at universities. It’s also not uncommon to see them in homeless shelters or in New York’s subway stations.

In simple terms, a chaplain is a person who performs ministerial duties apart from a parish. And as fewer people identify with a specific religion or attend religious services, Americans may be more likely to meet a chaplain than a local clergy person at a congregation.

That’s why the newly formed Chaplaincy Innovation Lab  at Brandeis University in Waltham, Massachusetts, aims to explore how chaplains are adapting to their changing circumstances.

“They’re very much below the radar,” said Wendy Cadge, founder of the Chaplaincy Innovation Lab. “This group of people is sort of rising and taking on new responsibilities.”

The lab, which formed in 2018, hosts events that deal with chaplaincy within Buddhism and other religions, in prison and in secular settings. It also offers resources to those exploring careers in chaplaincy.

Cadge said a national survey she led at Brandeis University found that 20% of the American public had worked with a chaplain or had been contacted by one in the last two years.

“To me, that number is surprisingly high,” she said. “It suggests the need for more understanding.”

The lab’s website helps highlights institutions that offer degree programs and specializations in chaplaincy. It also notes the requirements for certain sectors, such as the training necessary for federally employed chaplains in the Army or in federal prisons. There is no standard training for chaplains working at the nonfederal level, according to a Chaplaincy Innovation Lab report.

The lab aims to better grasp that landscape.

“We really wanted to begin to look at who are they, how did they get there, what do they consider professional in terms of their work and how do we begin to bring them together,” said lab co-founder Trace Haythorn.

The Chaplaincy Innovation Lab helped organize panels about the state of chaplaincy during the recent American Academy of Religion meeting.

Lance Laird, an assistant professor at the Boston University School of Medicine, took part in one of the panels, which documented the experiences of Muslim chaplains in the United States.

Through online surveys of 85 people from across the U.S., Laird found that Muslim chaplains were highly educated, with nearly 80% having obtained a graduate-level degree. Most (67%) identified as men and three-quarters of the Muslim chaplains served both Muslims and non-Muslims. The top three sectors where the chaplains served were health care, corrections and universities.

He spoke of a chaplain who offered support to a Buddhist woman before she went into surgery. He encouraged her to pray and embraced her when she asked for a hug. He helped put the woman at ease, but wondered if he had betrayed his faith by embracing the woman.

Laird recalled another chaplain, who read Christian Scripture about Jesus with a white Catholic woman who was initially hesitant to receive guidance from a Muslim woman wearing a hijab. In that case, the Muslim chaplain sought common ground by talking about visiting the Vatican and working alongside Catholics. Eventually, the woman allowed the chaplain to read from the Gospel of Matthew during her stay in the hospital. Laird said the woman’s daughter told the chaplain her mother expressed how much she enjoyed her visits.

“We also see patients crossing boundaries to receive care from someone they perceive as a sometimes dangerous ‘other,'” he added.

Through interfaith spiritual care offered by Muslims, Laird said, patients or staff have found a new appreciation of Islam and Muslims as a “healing force.”

To Mote, the chaplain at Hartsfield-Jackson International Airport, onlookers may think that “anybody could do what I do,” she said.

While anyone can greet and escort, Mote said, not everyone can be present in the moment, whether that means being comfortable in silence or engaging in a thoughtful conversation.

It’s about “learning to be present without pushing your own agenda,” she said.

Visit My Website
View All Posts
Previous Superstition and its Benefits in Sports
Next Coffee Talk: Restoring Trust

The FāVS Center needs your help on Saturday (Oct. 17) from 1-3 p.m. We need to get our center ready for winter!