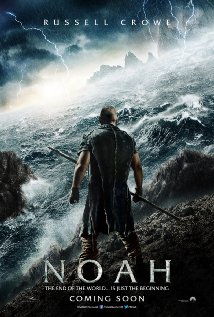 Aronofsky’s “Noah” can be epic, but there’s a catch

Filmmaker Darren Aronofsky (“Black Swan”; “The Fountain”) has been determined to do a movie about Noah for some time. His long-awaited movie will release in 2014 along with the English version of his graphic novel based on the screenplay. So far the project has garnished no shortage of controversy.

I admit that I’m not a big fan of Bible-based movies. If evangelical Christians do them, they can appear (to me) to be sanitized and preachy. If created by a major studio, they are often produced with the goal of getting busloads of evangelicals to the theater and this means less risk allowed in storytelling. Nothing about that appeals to me.

Aronofsky’s film has received its share of criticism, especially after an early leaked trailer showed the film’s reliance on 1 Enoch and an environmental focus. (The latter led Christian screenwriter, Brian Godawa, to label Aronofsky an “Environmentalist Wacko.”) Others have also voiced concern that his movie will stray from the biblical storyline and this has moved Paramount to push for changes to the $125 million dollar film.

“Noah,” which features big names like Russell Crowe (Noah), Jennifer Connelly (Noah’s wife), Emma Watson, and Anthony Hopkins (Methuselah), can be more than a “Waterworld” prequel; it can be better than a Bible tract on the big screen; it could even be epic. Epic films explore the nature of humanity on a impressive scale. They center on a hero whose ambitious journey follows an exotic landscape. Like “The Lord of the Rings,” it may include incredible creatures, extravagant costume, and fantastic scores. Noah can be like this, but first Aronofsky needs to commit a few evangelical sins.

Sin 1: He must add to the biblical story

While the flood accounts have theatrical elements — a giant boat, a worldwide flood that kills millions, and a bunch of hitch-hiking animals — there is very little narrative and character development for a fully-developed story. The evangelical principle of Sola Scriptura (“Scripture alone”) will produce an anemic movie. To transform Noah’s story into that which appeals to moviegoers, Aronofsky has to add to the Bible’s account.

Sin 2: He shouldn’t try to harmonize the Bible’s details

The temptation by strong evangelical inerrantists might be to harmonize these divergent details, reject anything that appears to challenge the accuracy of Scripture, or that might call into question Mosaic authorship. In other words, Aronofsky has about as much of a chance of pleasing conservative evangelical scholars as J. J. Abrams and Roberto Orci do fans of Star Trek.

Rather than embark on an impossible mission to unify all under one reading of the Bible, why not simply pick one set of details to build a story around and move forward.

Sin 3: Mine the long history of flood mythology for a good story

In an interview with The Guardian, Aronofsky said that Noah is “no conventional biblical epic” and noted that Noah is a “dark, complicated character.” For him to explore this character, he should be allowed to plunder the colorful world of Noah mythology, which may include the alien cosmology that is the Genesis universe, or the grand flood narrative of The Gilgamesh Epic, or (hopefully) the freakish giants of 1 Enoch.

Use of Enoch will (and has) upset a few people, but it is a book with such historical appeal that even the New Testament book of Jude quotes it (Jude 14-15; 1 Enoch 1:9), with the writer calling Enoch a prophet. If it was good enough for Jude, surely it’s good enough for evangelicals in a movie about Noah, especially if it is acknowledged ahead of time. Even if Aronofsky adds his own modern perspective on the environment, he’s just proudly taking part in a long history of customizing flood stories for another generation. But if we get too many chefs in the kitchen, each fighting over the movie they want, then we can expect what we’ll get — a spoiled soup.

In other words, there are too few story details in the Bible to build a full-length movie around and even those details are not in agreement. So perhaps evangelical Christians who want to see a good movie should just sit back, enjoy the ride, and try not to get seasick.

Brandon G. Withrow is a writer, professor of the history of Christianity and religious studies at Winebrenner Theological Seminary, and a contributor to @huffingtonpost & nonfiction editor for @discardedimage.

Previous POLL: Should we listen to 911 tapes from massacres such as the Newtown shootings?
Next Stop comparing Nelson Mandela to Jesus, British journalist says

Each and every one of Aronofsky’s TOTAL of five major motion pictures (Pi, Requiem for a Dream, The Fountain, The Wrestler, Black Swan) has dove DEEPLY into the intense psychological underpinnings of its lead character(s).

Is there a more intense scenario to imagine than Noah’s? Looking forward to it!