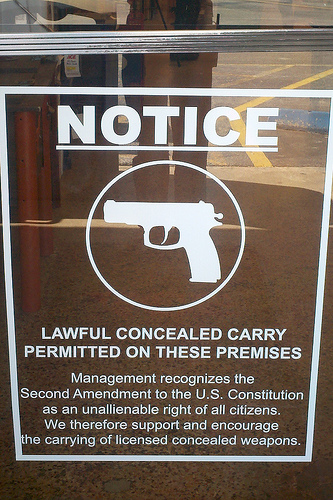 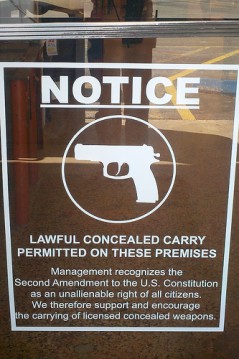 On Monday, Arkansas Governor Mike Beebe, a Democrat, signed the so-called “Guns in Church” bill into law, allowing those with concealed-carry permits to bring their guns into churches.

Under the new law, churches and other places of worship are allowed to decide whether or not to allow weapons.

“Churches that take no action will remain off-limits to guns,” Suzi Parker wrote at Reuters.

Nicholas Stehle, a member of the board of directors of Arkansas Carry, said the law “is crucial to protecting the freedom of religion and property rights.”

“The state has no business meddling in the affairs of our churches,” he added.

But while gun-rights advocates praise the law, not everyone is happy.

“We're charged with trying to figure out how to welcome every single person who walks in here as if its Jesus walking in the doors,” said Reverend Scott Walters, pastor of Christ Church on Scott Street in Little Rock, Ark.

“Is that person carrying a gun? We'd rather not be having that conversation,” he added.

According to KSN, Walters is left wondering, “How many times his congregation will face a firearm on accident,” as it did a couple weeks ago.

“An usher rushes up the aisle to a priest, this was less than two weeks ago,” he told KSN.  “She told him that someone had walked in and there was a huge bulge in his pocket. It looked like there might be a pistol butt hanging out of it. Her question to us was what do I do?”

I mean, I'm sure that you could justify it with self defense and every man has to live with his own conscious,” he said.

“I know where I'm going when I die, but somebody else's life that I take I could be eternally sending them to hell and I don't want to do that,” he added, saying he would rather die than kill another human being — even in self defense.

A follow-up proposal, if signed into law, would require churches to post signs advising the public if guns are allowed in the place of worship.

“If a church wants to allow that then there needs to be signage to make it clear that's available,” Gov. Beebe said.

This is one libtard pastor that needs to go and study the scriptures. And the school that gave him a divinity deploma ought to be shut down. There is a difference between “murder” and “killing”.

The sixth Commandment says, “You shall not commit ‘MURDER'”. It does not say you shall not kill. Murder is the taking of an innocent person’s life without provocation. Kill is “cause the death of (person, animal, plant…).

You said it Mark!

This is the kind of pastors that do study the scriptures to misleading the flok and sell theirs lies to make profit .
The devil also used scriptures to tempt Jesus in the desert.
Do not take for granted what a pastor or priest or whatever say but be wise and STUDY( not just read) the scriptures! and test them if what they said is true.